The Two Man Game: Looking At How Conley and Gasol Work

The most unheralded duo in the league.

Share All sharing options for: The Two Man Game: Looking At How Conley and Gasol Work

Being a small market team doesn't help much when it comes to national exposure. I could easily complain about how ESPN and other media outlets don't pay much attention to the Memphis Grizzlies like other fans do, but I hate that way of thinking.

It all comes with the territory of being a professional team in Memphis. If you're team is in large market (LA, CHI, NY, etc) or has a once-in-a-generation talent (Kevin Durant) then you're the talk of the media whether the news is positive or negative. It's simple math: more fans (or a superstar) means national news.

And we often hear about how well Lebron James and Dwyane Wade perform together. About the chemistry between Chris Paul and Blake Griffin. About how good a duo James Harden and Dwight Howard will be this season. Those are some of the best two-man duos in the NBA. What those stations are missing out on is the two-man game that has helped propel the Memphis Grizzlies to the near-top of the Western Conference over the past few years.

If you thought Mike Conley and Marc Gasol then you've guessed right.

When talking best pick-and-roll duo's in the NBA, this pairing isn't mentioned much, but the numbers are on their side. According to Synergy Sports, Gasol ranked 23rd as the pick-and-roll man with a PPP (Points Per Possession) of 1.19 and a %Score (the percentage of plays where the player scores at least 1 point, FT's included) of 60.7%. Here is a chart comparing Gasol's effectiveness as the screen man compared to other top NBA bigs:

Schemes dictate how often the player is used in the pick-and-roll situation, but this is a pretty good representation of how good Gasol operates in it.

Conley on the other hand isn't the best pick-and-roll point guard this league has to offer, but his skill set and Gasol's presence puts him in good position when running the play. 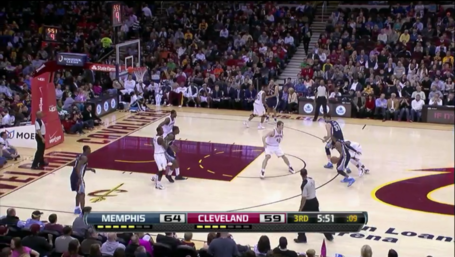 Above is a shot of a Conley-Gasol pick-and-roll against the Cleveland Cavaliers. A rare, good screen by Gasol forces Kyrie Irving behind Conley. This forces Tyler Zeller to cut Conley's lane to the basket off leaving Marc Gasol to dive and attack the open space however he sees fit. The result is then this: 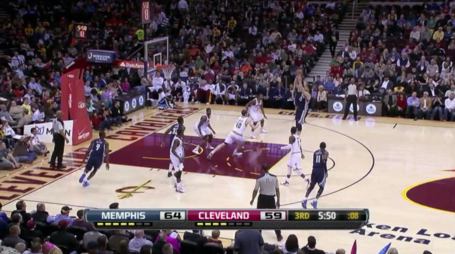 While Gasol's screen is the reason he was allowed to be so open, floor-spacing played a large part. Putting Tayshaun Prince closest to the pick-and-roll forces Alonzo Gee to stay home. Replace Prince with Tony Allen and Gee likely leaves his man open to force Gasol to make another decision.

It also helps that Marc Gasol was an elite mid-range shooter last season, shooting 47 percent on 16-23 footers. That spacing gives Conley space after the initial pick.

Defenses have learned that leaving Marc Gasol open on pick-and-pops isn't ideal. This opens the door for Mike Conley to penetrate defenses knowing he'll likely be facing one defender instead of two. Here's an example of this against the Washington Wizards: 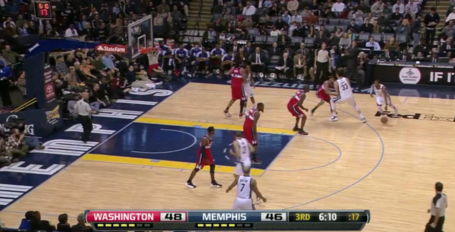 Emeka Okafor begins in position to cut off Conley. But the result of Gasol popping means he has to drop back after Trevor Ariza fights through the screen. That results in this: 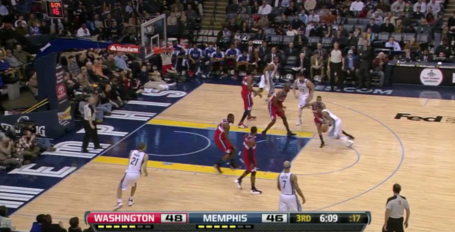 A quick burst of speed gives Conley an open lane to the basket. Gasol's presence made that possible along with Tayshaun Prince's. Martell Webster had to decide whether he'd get between Conley and the basket or stay on Prince. He chose Prince which gave Conley space.

Same thing occurs in this play against the Indiana Pacers: 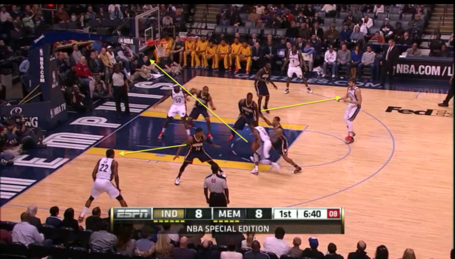 Guarding Gasol is one of the best rim defenders in Roy Hibbert. The use of Marc Gasol in the pick-and-roll not only draws him away from the basket, but it keeps him from fully committing to Conley's play at the rim. And like clockwork the help defender (Paul George) has to choose between the driver and the shooter. He chooses the shooter.

Something that's been evident in all of the above instances is Mike Conley's ability to shift gears when getting to the basket. His use of the hesitation dribble is crucial to him beating defenders to the basket. Just another move in his arsenal that has made him one of the best point guards in the NBA. If Mike can largely improve his field goal percentage in the paint his stock in this league will jump once more.

This guard-center relationship doesn't stop in the pick-and-roll. Mike Conley's offense relies a bit on Marc Gasol's playmaking abilities. Of the 493 baskets Conley made during the 2012-13 season, 85 were assisted by Gasol. Subtract the isolation plays from the equation and Gasol assisted on roughly 20 percent of Mike Conley's offense. Those are big numbers from a big man. 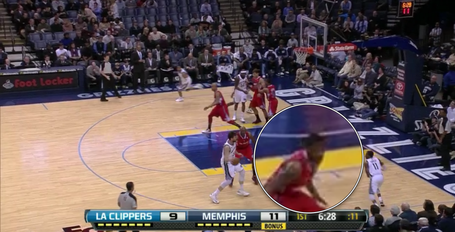 Here's an example of the Gasol-Conley combo when Conley plays off ball. The closeup shows how most defenders play Conley without the ball. Instead of cutting off the basket they're putting themselves in position to defend the handoff. Some would say that Eric Bledsoe "got caught looking". Conley scores an easy two points.

Look at the position these defenders are in that allows Conley to get open back door: 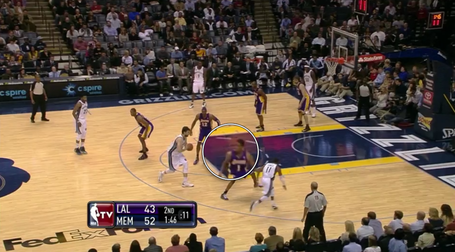 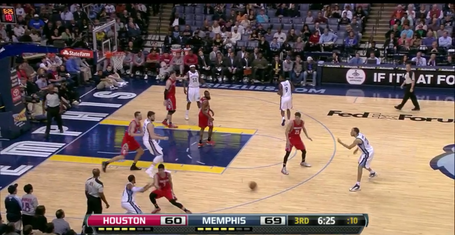 Expecting the hand-off gets defenders completely caught off guard. That opens the door for many back door cuts for Conley to feast on.

This is just a gist of what Conley and Gasol do together on the court. This doesn't include hand-offs, coming off screens , transition buckets and spot-up shooting. With Dave Joerger in the picture this opens the door for more fixes within the offensive system. Zach Randolph's "decline" could force these two to work out of the pick-and-roll more.

Now when you speak on some of the best pick-and-roll duos in the league, be sure to mention Marc and Mike. They belong in the conversation.