Quincy Pondexter Contract a Front Office Win for the Grizzlies

The Memphis Grizzlies recently announced an extension of Quincy Pondexter at four years, fourteen million dollars. Should Q keep developing at his current rate, that is an absolute steal, and an incredible win for the front office.

Share All sharing options for: Quincy Pondexter Contract a Front Office Win for the Grizzlies

Quincy Pondexter and the Memphis Grizzlies recently agreed on an extension reportedly worth four years and fourteen million dollars. Official numbers haven't been announced, but we are likely looking at an escalated salary starting around $2 million the first year, and ending just over $4.5 million in the last year. In the business, that's what they call a "team friendly contract."

Quincy started off last season showing very evident improvements in his game, specifically from the corner, where the great one's live. Despite an unlucky knee injury, Pondexter rebounded in time to become the main three point threat on a Grizzlies team that sorely lacked them. While his defense is a tad overhyped, he is fast emerging as one of the better 3-and-D players in the league, and is projected to be the Grizzlies starting small forward in the not so distant future. He doesn't have great size to be a starting 3, nor do I expect him to start making All-Star Games or garnering MVP votes, but he is a player who has bought into the system, fits well, and meets a definite need, and at an average of $3.5 million per year, it's not only incredible value, it's also a big win for a front office that hasn't had very many.

Show More on the Court, and Less in Your Head 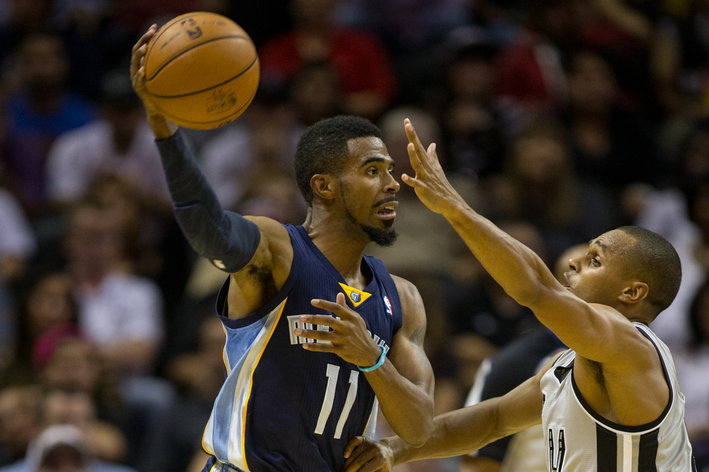 The Grizzlies offensive discombobulation can be explained with a handful of analogies.

Now, let me clarify. I think, for the most part, the new regime has done a more than commendable job with this team, but they have been far from perfect. In the first few weeks after taking over, the front office began the search for a team willing to partner up in a Rudy Gay trade. At this point, there is no debating about whether or not this was the right move. It was, and it simply had to be done, but the means by which they got to the end were excruciating. Each morning we'd awake to a new trade rumor featuring a new team and about a dozen new players. It was a very public shopping of the former Grizzlies small forward, and one that clearly affected him on the court and off. There probably wasn't a general manager in the league who didn't believe the Grizzlies were going to keep Rudy Gay, but Memphis' front office simply did a poor job of accomplishing the trade.

The offseason was no kinder to the new regime. After the series with San Antonio, one thing was abundantly clear: Memphis needed shooters. Badly. So with that need they went out and signed Mike Dunleavy Matt Barnes JJ Redick Martell Webster Dorrell Wright Marcol Belinelli Gary Neal Nick Young Corey Brewer Kyle Korver Wesley Johnson Luigi Datome Carlos Delfino Anthony Morrow Monta Ellis Brandan Wright Wayne Ellington nobody. It wasn't until Mike Miller was amnestied by the Heat in late July that Memphis finally added a much needed shooter. And as great as Mike Miller is and as much as he needs a hair cut, he cannot be counted on over the course of a full season. Then, on draft night, despite being able to turn a second round draft pick and the packaging that Darrell Arthur came in into Kosta Koufos, the front office took a fair amount of heat for drafting Jamaal Franklin, someone who doesn't have a good shot nor projects to be able to help this team win this season, when there were still some quality shooting prospects on the board.

It's an insult to the intelligence of the fanbase to ask us to believe that Tayshaun was simply Mr. Tummy Ache all preseason.

Flash forward to this season, and the Grizzlies are still looking to move their overpaid, starting small forward, only this time, it's Tayshaun Prince. The official word was that Tayshaun missed all but 15 minutes of the preseason because he had a stomach virus, and if you believe that, I've got some great investment opportunities for you. It's impossible to know whether or not they were actively shopping him, or just trying to keep him from getting hurt or performing poorly in the preseason so his value didn't go down. It's an insult to the intelligence of the fanbase to ask us to believe that Tayshaun was simply Mr. Tummy Ache all preseason, so much so that he couldn't even put on a decent pair of slacks and a colorful blazer and have a seat at the end of the bench. I commend the effort of the front office for looking for someone in need of a Prince, and I think if I were in the same situation, I probably would have done the exact same thing. Let's face it, the last thing we need is for Prince to tear his ACL and be completely stuck with his contract for the next two years. But the consensus from around the fanbase was that most people didn't care for the fishy way the situation was handled, even if the front office had little to no other choice.

But the signing of Quincy Pondexter to the specific contract that he signed, is a definite, non-negotiable win. Compare his contract to that of Martell Webster, who signed a four year, $22 million deal in the offseason and its easy to see just how far ahead the Grizzlies really emerged. Webster is a player who's stats compare really well to Quincy. He's a career 38% 3-point shooter, and through age 25, what Quincy is now, he shot 37%. To this point in his career, Q has shot 36% from beyond the arc, and like I said, he's just now 25. Bare in mind, Webster has been in the league for eight years now, whereas this is season number four for Quincy. So the Grizzlies basically signed a younger version of Martell Webster with a significantly higher ceiling to a contract worth $8 million less than what Webster himself received from the Wizards. Thats an impressive feat.

Grizzlies fans should feel comfortable going forward that Jason Levien and company are going to make smart basketball decisions while putting together a championship caliber ball club. There have been some hiccups and missteps, as is to be expected, but the future looks bright by the bluff.