Analyzing Grizzlies vs Warriors: So... What Changed For Memphis?

Share All sharing options for: Analyzing Grizzlies vs Warriors: So... What Changed For Memphis?

Go figure. A team whose biggest strength is defense actually looks like a top team in the Western Conference when they ... play defense.

I'm not of the group who thought the Grizzlies problem stemmed from focusing on offense too much in practice. Considering nothing has changed in the scheme and the only new players are Mike Miller, Kosta Koufos, Nick Calathes and Jamaal Franklin, two of whom haven't played many minutes prior to tonight, a drop in defensive focus to 'pretty' up the offense shouldn't have resulted in a dramatic drop in the defense.

That's what changed from games one through five and tonight. Or should I say the Grind changes, because you know, grit-and-grind.

It pained my spirits to see Marc Gasol half-assing on the defensive side of the ball. The rotations weren't sharp. The fffort was lost. And most importantly defending the paint was something that was near non-existent.

Well, Marc Gasol and the Memphis Grizzlies of old showed up tonight. Offensively for Memphis things were up to par with the previous games minus the turnovers. It helped that the Golden State Warriors were held to 90 points in quite the high-speed game (the game finished with a pace of 98.72).

From the jump the difference showed. On the second possession of the game the Warriors went with a pick-and-roll with Klay Thompson as the ball-handler and David Lee as the screener. 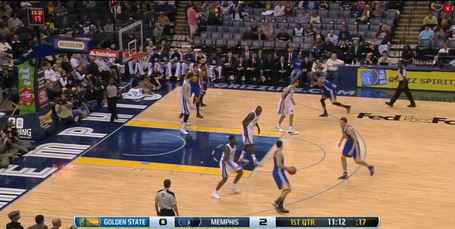 This particular type of play has been something the Grizzlies have struggled with so far this season. Kevin Yeung did a great job of highlighting that in a piece from earlier this week. The initial pick-and-roll defense from Zach was outstanding, cutting off Klay's lane to the basket. 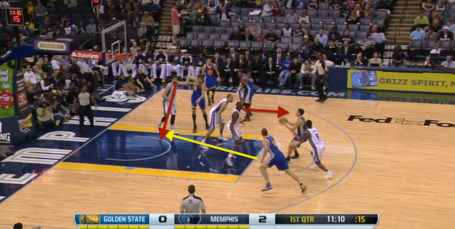 This is standard pick-and-roll defense and like the previous season the last line of defense was depended on to make the precise rotation and prevent an easy basket. And that's where the reigning Defensive Player of the Year comes in. Without the athleticism like a Dwight Howard who is able to leap the court in a single bound (I promise this pun wasn't intentional), Marc's rotations have to be crisp and on point. Look at this play against the Spurs on opening night. 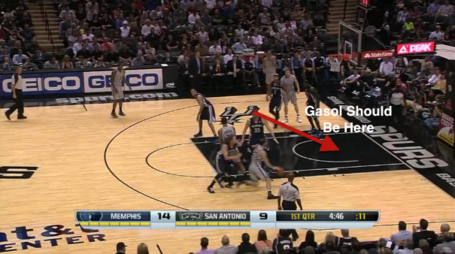 The result? An easy two points for Manu Ginobili on a non-contested layup. Now look at the David Lee shot:

A straight up from Gasol results in a missed shot from David Lee. This is the trust that has been shown over the past two years. The trust that resulted in the Grizzlies posting the second best defensive rating last season and Marc Gasol's winning of DPOY.

Here is another play where Gasol's awareness created a comfortable situation for the Grizzlies defense. After a miss from Marc, Stephen Curry gets a rebound and runs the floor. He eventually finds Andrew Bogut to use as a screen-man to get some separation from Prince: 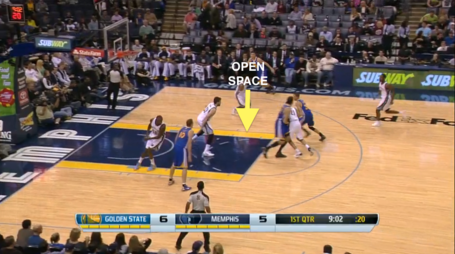 Gasol probably doesn't know verbatim that Stephen Curry is shooting 59.1 percent from mid-range, but he does know that relinquishing to open space to Curry equals an easy jumper on his behalf. Instead Gasol stepping up allows he and Prince to double Curry, putting him at an awkward angle. The surrounding defenders in Mike Conley and Zach Randolph have put themselves in position to make a pass to the man closest to him a tough one. The play results in a turnover when Curry forces a pass to Bogut who's at the free-throw line.

Here is another play where Marc Gasol's rotation put the Grizzlies in position to disrupt an easy shot, this time involving Harrison Barnes and Mike Miller. 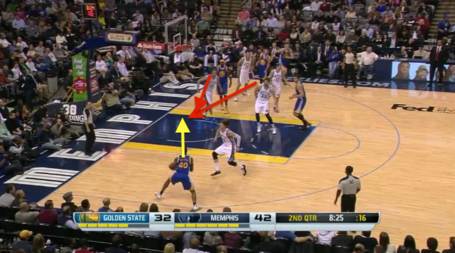 A great cross court pass from Steph gets Barnes to ball with Miller closing out. While the lane to the basket is quite easy for Barnes, Miller does a great job of forcing him baseline instead of letting him attack the middle of the floor. This comes with trust that the back line of defense will be in the right position in a timely manner. Both Koufos and Gasol have a chance to get there. 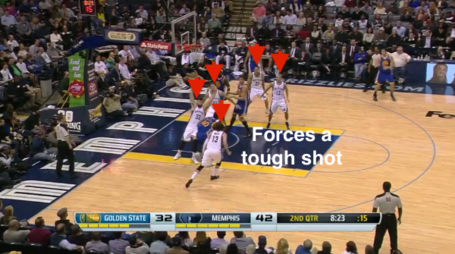 Gasol gets into position and every Grizzlies is in the proper place to defend this shot. You could debate whether Nick Calathes digs down too deep as he's defending Steph Curry, but with his height and arm-length a quick recovery is possible. Barnes makes the tough, right-handed hook, but the result doesn't matter on the shot. David Joerger wants this type of defense out of his team every time down the court.

Remember this play against the Dallas Mavericks? 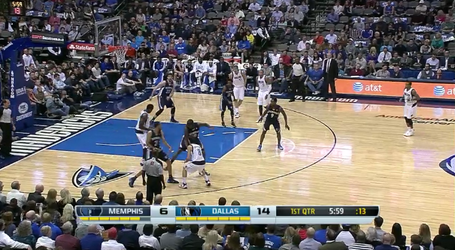 Resulted in an easy dunk due to an extremely late rotation from Marc Gasol. Remember what I said about Gasol's lack of athleticism? The Dalembert dunk shows what I mean. If Gasol isn't in place at the right time the opposition has a chance for an easy layup every time. The Grizzlies were in a similar situation against the Warriors. 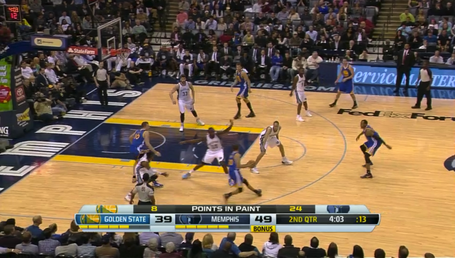 It helps that Andrew Bogut isn't as prolific a shooter as Dirk Nowitkzi from mid-range, but a more decisive Marc stops what should be an easy bucket. The biggest difference in the Dallas play and Golden State play is that Marc sniffs out the roll from Lee. Instead of waiting until he received the ball, as he did in the Dalembert situation, Gasol shads toward Lee as he begins to roll to the basket. Lee is then forced to post-up against the bigger Marc Gasol and is blocked.

In tonight's win the Grizzlies posted a defensive rating of 91.4, making a jump from 28th to 21st overall in defensive rating. It's a welcome to sight to see the Memphis Grizzlies defense return to it's dominant form. Let's hope they keep this up as the schedule toughens up over the next few weeks.