How will the Pacers try to defensively attack the Grizzlies on Monday night?

The Indiana Pacers are playing like the best team in the league right now. They fight for possession (on both offense and defense), they feature two-way a burgeoning star in Paul George, and perhaps most importantly, they know what they do well.

And what they do well is shut their opponents down. The Pacers field, by far, the league's stingiest defense. The classic line is that a good defense "takes away what you want to do." And that's pretty much the Pacers

Here's a perfect example in a recent game against Brooklyn. The Nets initiate their offense with Brook Lopez and Andray Blatche setting two picks up high for Deron Williams moving left to right. Deron Williams - like Conley - is a threat to shoot from long range, and you can see George Hill fighting over the top to limit that option. 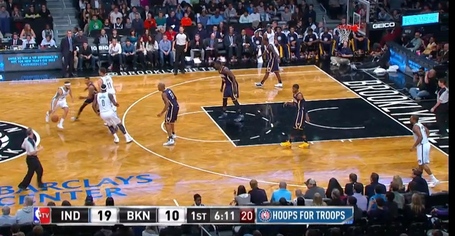 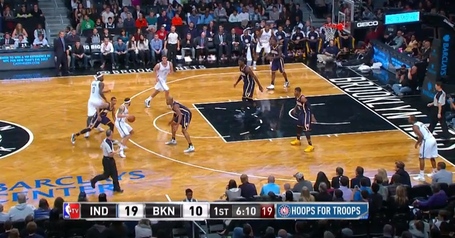 Roy Hibbert has positioned himself squarely in the middle of the lane, cutting off a diving Brook Lopez. The key is Paul George. Though he has a plus 3 point shooter in his corner, he is so long and athletic, he can camp out nearly in the paint - making Deron Williams driving lane non-existent - while still recovering to close out on the corner shooter. With few good options on this half of the court, Williams reverses the ball back to Blatche. 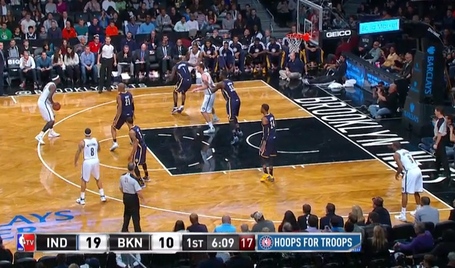 This is the situation the Pacers want their opponent in. The ball in the hands of the fifth offensive option far away from the basket. Lance Stepenson (in the top corner) has crashed down to delay Lopez's jaunt to the rim, and has already recovered to his man in the corner. Blatche should return the ball to his point guard to reset the offense.  But Blatche has always been a bit of a free-lancer, and pump fakes a shot a foot inside the 3 point line. David West commits a fatal error, and lunges at the Blatche pump fake. Suddenly Blatche is in the lane. 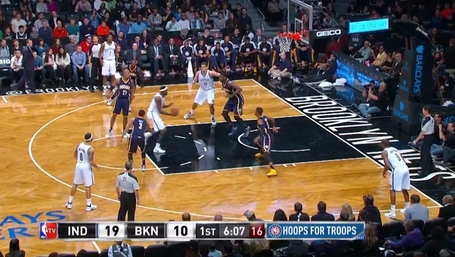 Roy Hibbert, one of the best rim protectors rushes to meet him. But Blatche is already dishing to Hibbert's man, Brook Lopez, who in the next frame, finishes at the rim uncontested. 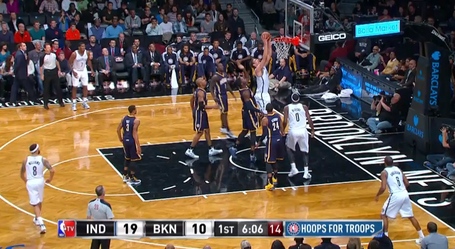 Even though this possession ends with a bucket, it illustrates just how hard it is to score on the Pacers. Even with David West committing a massive error in jumping at Blatche's pump fake, the Nets had to rely on their fifth option on offense, a big man no less, executing a difficult drive and dish move to get an open look. I'm sure the Pacers are comfortable with the Nets trying to beat them with Andray Blatche.

The obvious solution would be to try to unroot Roy Hibbert from the paint, but that may be more difficult than you think. The below slide is from the 4th quarter, during Brooklyn's comeback attempt. 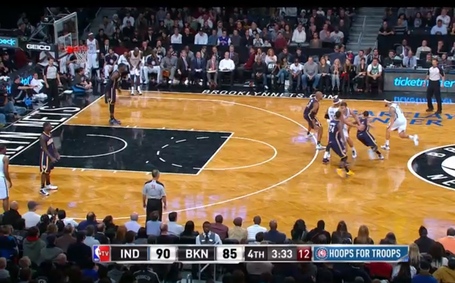 The Pacers have switched Hibbert onto Kevin Garnett to keep Hibbert out of the Deron Williams Pick and roll with Brook Lopez. Garnett stands in the top corner. Check where Hibbert is. A foot outside the paint. Though Garnett is not exactly a threat from the corner, the Pacers give Hibbert an extra second by trapping the pick and roll. 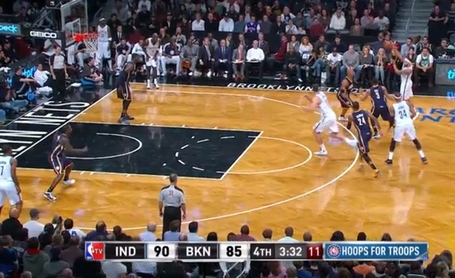 Williams make a perfect pass to Brook Lopez, who catches the ball on a dead sprint to the rim. 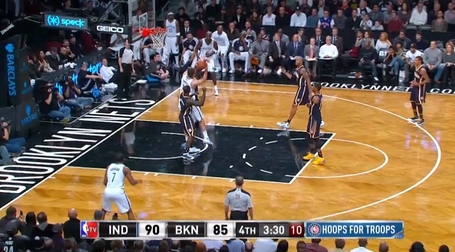 Not only is Hibbert there to contest, but Stephenson has crashed down from the bottom corner to double Lopez. Lopez can't dribble, can't pivot, and is forced to go straight up with the ball against two elite defenders. He converts, but just barely. Most importantly, the Pacers didn't foul. They made Lopez's life as difficult as possible, forced him to make a great play, and they didn't bail him out. Hibbert is maybe the best in the league at going straight up, making himself as big as possible, without fouling.

So, it won't be easy to involve Hibbert in plays outside of the paint. Everyone tries to do it. Marc Gasol prefers to operate from the high post, and given space, he will take and make a free throw line jumper. The Pacers ready answer would be to switch Hibbert onto Randolph for stretches, and if Hibbert refuses to leave the paint to guard Kevin Garnett (an elite jump shooter) there's no way Randolph will make enough jump shots to uproot Hibbert from the paint.

The Pacers have the best defense in the NBA right now, and scoring against them isn't easy. But the news isn't all bad. Though George Hill is a good defender, Paul George and Lance Stephenson are elite, and the Grizzlies don't exactly have huge threats for them to guard. I'd expect Stephenson to guard Conley for stretches, but even so, Conley will probably have the best defensive matchup.