The Grizzlies franchise has only won in Indianapolis a total of three times in its history. The Pacers are looking like top ranked juggernauts, but is a new era of Memphis basketball ready to compete on the Pacer's home court?

History and recent trends serve as some interesting accompaniment  to the Memphis Grizzlies matchup against the Indiana Pacers tonight. While Memphis has only won 3 game in their history of travel to Indiana, those wins came in the past five years, but they were against teams not nearly as stout and ferocious as this current rendition of the Pacers.

Memphis and Indiania were the top two rated defenses from last NBA season, but so far in 2013 the Pacers are the team that is continuing on that tradition. The Grizzlies taste of success from Saturday night might give them the boost of confidence they need to settle into the mentality that made them successful last season, but they'll have their hands full with a blossoming Paul George who is getting it done on both ends of the court. 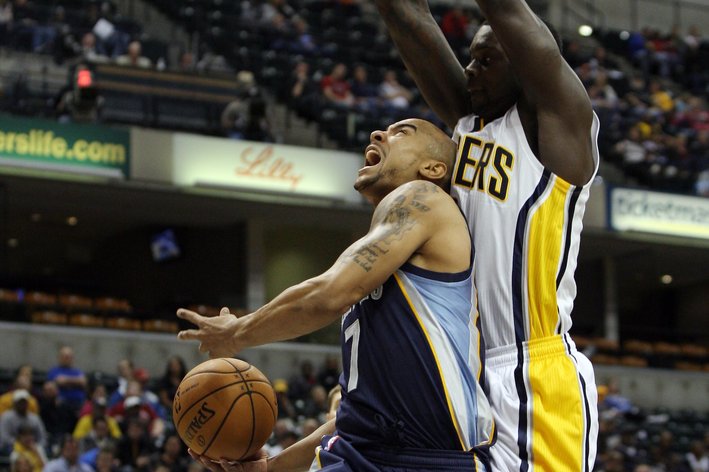 A breakdown of how the Pacers will look to disrupt the Grizzlies on offense.

I'm fearful of what I might watch while a scarecrow version of Tayshaun Prince tries to guard the explosive George, and hopefully we'll see Tony Allen be able to help out in that regard. But the Pacers have nice size across all of their starters, so he's not the only one to worry about. Roy Hibbert is a monstrous body to deal with, even for a Marc Gasol, and George Hill and Luis Scola are players that have always given the Grizzlies fits.

Matchup to Watch for the Grizzlies: Zach Randolph vs David West. This is one area where the Grizzlies have a size advantage, but West is no string bean by any stretch of the imagination. These are two seasoned, post stars that have fought and scraped for every ounce of respect they've garnered. ZBo will have to continue his paternal-inspired-rage from Saturday night and dominate the rebounding game on both ends, because Gasol might struggle in that regard tonight. Memphis' presence in the paint will end up making or breaking a victory.

Why the Grizzlies will win: Any notice that Mike Conley is averaging over 20 pts a game so far this season? Conley is poising himself for some huge things this season, and he's got a nice opportunity tonight to catch a lot of people's attention. Memphis struggled in their bouts with Indiana last year, but those two games were drenched in the stank and mire of the Grizzlies divorce with Rudy Gay. Those rosters still featured a more timid combo of Gasol/Conley, and also featured a gun-shy-ish Jerryd Bayless, who would lose that stigma after Rudy Gay was dealt. The combo of Bayless and Gasol only averaged 10 shot attempts per game against the Pacers last season. (Also, this guy named Mike Miller.)

Why the Grizzlies will lose: It's called a steamroller, and it's what the Indiana Pacers might be right now. Matt Hrdlicka documented how hard it will be to score on the Pacers, and the Grizzlies will need to stand tall on defense themselves to stand a chance in this one. Will we see bad Kosta or good Kosta tonight? Because Luis Scola could end up pwning him up and down the court - forcing Marc to play too many minutes and burn out at the end of the game. Paul George could make this ugly if the Grizzlies don't find a way to limit his impact early in the game.

What will be different regardless of who wins: Tayshaun Prince won't attempt 20+ shots to hamstring our offense the way Rudy Gay did last year. Even though Prince has a rough matchup with Paul George, his anti-Rudy impact on this game could end up being the difference for the Grizzlies. By the way, welcome to The Return of Rudy Gay week, everybody. We'll be featuring plenty of commentary on everyone's favorite myopic Ex-Grizzly.