Rudy Gay's Return to Memphis: To Boo or To Woo

On Wednesday Night, Rudy Gay returns to Memphis for the first time since he was traded. I reach Seussian levels of epic proportions as I try to determine what reaction he'll receive.

Share All sharing options for: Rudy Gay's Return to Memphis: To Boo or To Woo

To boo or to woo, this is the question I present unto you. On Wednesday night, when Toronto breezes through, coming into the bluff city with an old friend or two, I'd like to know exactly what you plan to do. Before play begins and the intros are through, and from the two lines of Raptors Rudy Gay steps into view, will you boo? Some people have already decided, they'll boo and they'll boo, while others instead will stand and they'll woo. As for me and myself, I'm not sure what to do, and if this is the place you find yourself in too, then let me present both sides with an in depth walkthrough. Whether you boo or you woo or whatever you do, largely depends on your Grizzlies fandom before his contract renew.

If you started following Memphis back in 01 and 02, and have seen more of their history and a losing season or two, you remember how great it felt to have a superstar bloom, and the highlights that came rolling in off of Flight 22. He wasn't the greatest, or even a close number two, but he was the key to our rebuild that brought the playoffs in view. There was another time in his career, when he would always come through, knocking down jumpers at the buzzer, and attacking the rim for a quick, easy two. He could rise and could fire, oh the lanes he'd cut through, getting so high off the ground he could smell God's shampoo. And as the seasons went on, despite the bad he would do, his superstar potential is what you'd cling to. His ability to take over games, early deficits to undue, this is the Rudy you'd defend from here to Timbuktu. If you've been around for a while, this is the Rudy you knew. 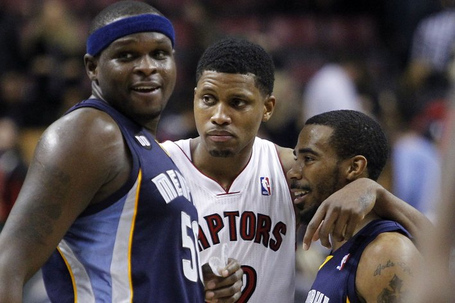 But if the Grit and Grind mantra has been your only Grizzlies' worldview, then you probably believe the statements above to be largely untrue, and in your mind he stinks, a la Pepè le Pew. You remember a player that would whine and pout, one who constantly withdrew, and those old throwback jerseys and their bright yellow hew, and your opinion of him is comparable with a pile of dog doo. You remember the crunch time failures, as constant and sure as the next morning's dew. In a close game we'd go to Rudy and directly on cue, he would dribble the ball right off of his shoe, and the crowd at the forum would scream, "PIECE OF POO"[1] as they begged to see him shipped to Kalamazoo, and in vain took the name of a famous carpenter Jew. Of course later we'd receive knowledge, something on which we could chew, that the problems with Rudy might all stem from his view. He reportedly needed contacts, his eyes would simply not do, but instead he kept playing, his vision askew, bringing the ball up the court like he was Mr. Magoo.

But it was not his vision nor his contract that got him shipped out of Beale Street Blue, the fit and offensive scheme was what it's all in relation to. You see the rest of the Grizzlies fit together with glue, they'd defend all game long, and the bigs they'd play through. Now whether he's right or he's wrong, playing his own version of basketball was what Rudy always tended to do. Try as he might, and he did try, it's true; he always stuck out like a large kangaroo.

I recently made a purchase, one I should have taken longer to review, when I decided a pair of zip-up chukka boots would be my new favorite shoe. I made the purchase without hesitation, because they were on sale, mind you, but when I first went to wear them, my mistake came to full view. The fit is just poor, and the look simply won't do. I look foolish, like a bad country singer, or a man writing about the wind who said that it blue. But despite all these flaws, none of which are untrue, they add to my height a good inch or two. Now, I love the extra inches, believe me I do, and if you've seen me in real life, you know this is true. But one minor upside over multiple problems isn't enough to subdue.

The Grizzlies are me in this scenario, and Rudy is that shoe. It was always about the fit, and Rudy simply wouldn't do. He's a bolt for a job that requires a lag screw. Yes, the fit is the problem, I tell you its true. It's like being a concert pianist and dating someone whose favorite band is Blink 182. Yes his contract didn't help, his pay and production were not equal to, but the fit was the main problem, along with the potential he could not live up too. Sure, the old coach would say the front office had a handful of pennies and wanted chicken cordon bleu, but he's currently filling out applications to work a drive-thru.

But now, it doesn't matter; he's been traded from Beale Street Blue, his eyesight and contract no longer part of our crew. Mike, Mark and Zach became the Three Musketeers, and Rudy was left to play the part of Cardinal Richelieu. Gone is his contract, and his turnover stew, but we'll always have the memories of the things we'd gone through. The buzzer beater over LeBron, that dunk on Manu, "Make Your Own Luck," and this YouTube clip that I so love to view. 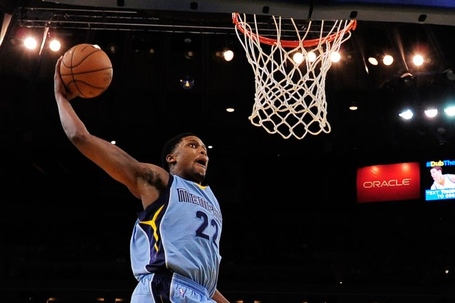 So the question remains, will you boo, and if you do, will you boo through and through, or perhaps only for a quarter or two?[2] Some will boo, then claim it's not true, but we'll know by the fact that their noses just grew. Some will woo, wishing that we'd never bid him adieu, while others will remember the hate he did spew, and that half-hearted apology that was just hot CO2. With mere hours until tip-off, I'm still not sure what to do. I once believed in Rudy's potential, I'll say it, it's true, but I recognize that his nonchalance he never outgrew. My head says he's the enemy, my heart recognizes the sentimental value, and so the conundrum itself will continue to brew.

To boo or to woo, what to do, what to do? Is there any other option on that night's menu? When the game begins, it's simple, he's the other team, so of course we won't woo, but I'm not sure when he's intro'd if we all ought to boo. I've debated and debated, but there's been no conclusion I drew, about this taboo scenario, to boo or to woo. Should we give him a hand and the credit he's due, or just boo and just hiss and just cheer for home brew? I present you this question; help me out, what say you? When Rick Trotter calls out his name, will you boo or will you woo? Will you think back on his turnovers, or remember them in lieu, or will you make him feel most unwelcome, like an Indiana fan watching a game at Purdue? There's no right or wrong answer, to each his own has never been more true, but I still can't decide what exactly I'll do. So again I will ask this to each one of you, what choice will you make, what's your A to my Q? On Wednesday night will you boo or will you woo? When that moment finally arrives, tell me, what will you say- or, I mean do?

[2] This seems like the appropriate course of action; in honor of how many games Rudy would only play for a quarter or two.