The Grizzlies are back in Memphis after a...less than desirable trip to Indiana to visit the Pacers. And they return to, lo and behold, Rudy Gay, his inefficiency once again in the flesh at FedEx Forum! So how do the Grizzlies get off the snide and start a West Coast swing at .500?

Check out Raptors HQ for the Toronto perspective on matters.

The Grizzlies are probably quite happy to return to the friendly confines of FedEx Forum, where their domination of the Golden State Warriors occurred just four days ago. That all but seems like a distant memory, as Indiana brought Memphis and their fans back down to Earth with a thorough sch-lacking using their own style of play against them. Stifling defense, slashing wings, transition opportunities, all were there for the Pacers and not for the Grizzlies.

What's that you say? I forgot someone? Who would that be? Rudy who?

The return of Rudy Gay to Memphis has been well documented, both here and elsewhere, and what it means depends on the context in which it is being perceived. If you are a fan of highlight reel plays, few and far between acts of "clutchness" and the ever-feared "potential", than Rudy Gay is your man, a 6'8" 230 pound freak of an athlete who can do things like this.

OR, if you are a disciple of Hollinger, analyzing shot efficiency and true shooting percentage, you despise Rudy Gay. In Toronto's double overtime loss against the Houston Rockets this past Monday night, Rudy Gay scored 29 points, got 10 rebounds and 4 steals. Impressive, right? Well, what if I were to tell you he did it on 11-37 shooting, for a measly 30% from the floor? What if I were to show you this atrocity... 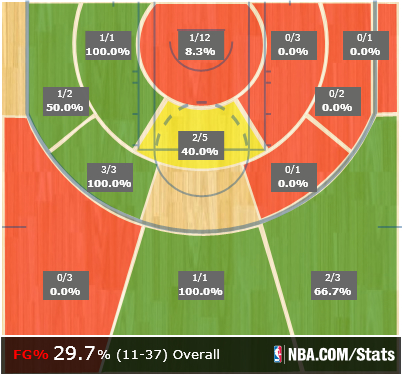 1-12 in the lane. ONE. FOR. TWELVE. That is shockingly terrible. Rudy has struggled shooting so far this season as a whole; 36% from the field on average. Not. Good.

Rudy's offensive struggles take away from the development of other players, which is something Grizzlies fans know all too well.

Rudy's free throw and rebounding numbers are up early, but the shooting is just a huge hindrance. Rudy Gay's off-season eye surgery has apparently been a terrible failure. Or maybe terrible eye sight was just used as an excuse for the truth; Rudy Gay is a volume scorer, a player who needs 20 shots to score 20 points. The unfortunate thing about this for the Raptors is, it takes away from younger players like DeMar DeRozan and Valanciunas, who could possibly benefit from more offensive opportunity.

Granted, DeRozan is also shooting 36% and Rudy's boy Kyle Lowry is "blowing past them both" at 41%, but DeRozan's game is still developing. Valanciunas is raw and could benefit from more offensive focus. Rudy is what he is, it appears, and that would make last season's blockbuster move from the Grizzlies the right one for Memphis moving forward.

Keys to the Contest

Memphis will get off to a hot start, which will be helped along by Rudy Gay trying too hard and putting his team in a hole early. Toronto will roar back on the energy of Terrence Ross and Hansbrough against the depleted Grizzlies bench and the game will be within 5 heading into the fourth quarter. The starters, and Mike Conley in particular, will then take control and finish off the Raptors.