Rudy Gay had a very happy return to Memphis as his current team soundly defeated his former team 103-87. The Grizzlies were once again out hustled and outworked, and looked disinterested in competing against the Raptors as Toronto cruised to a victory late.

Different drummer, same old beat. For the third or fourth time this season, the Grizzlies lost to an inferior team.[1] They lost to an inferior team because they couldn't withstand the body blows, and simply retreated, turned tale, and gave up. The team that rode it's slogan of "We Don't Bluff" all the way to the Western Conference Finals currently has a collective body language that says, "We Ain't Tough."

In the first quarter, fresh off allowing his man to procure a triple-double, Tony Allen allowed DeMar Derozan to torch him for 13 early points. Derozan finished with 18 points, Kyle Lowery had 21 points and six assists, and our old buddy Rudy Gay finished with 23 points, six boards, four assists, and two steals. The Raptors out worked, out hustled, and outplayed the Grizzlies all the way to a 103-87 victory in the homecoming for Rudy Gay, who received a chorus of cheers, followed by a steady, escalating stream of boos throughout the game. Toronto led throughout the half, with Memphis never really putting up much of a threat to get close.

Outside of Mike, no Grizzly really turned in an inspired performance.

In the third quarter, it appeared as if we were in for a classic grind-from-behind victory,[2] after Memphis, led by Mike Conley, charged back to tie the game at 70. Mike Conley had 29 points on the night, including 10 in the first three minutes of the third quarter. Toronto would outscore the Grizzlies 33-17 the rest of the way, though, as they cruised to the victory. Outside of Mike, no Grizzly really turned in an inspired performance. Marc Gasol had a nice 18-10 box score, but he played small most of the night, and had little to no effect on the defensive end. Zach Randolph had 10 and 10, but only took nine shots. He has gotten frustrated with a lack of foul calls, and when he doesn't get them, his game shuts down, and he becomes terribly ineffective on both sides of the ball. 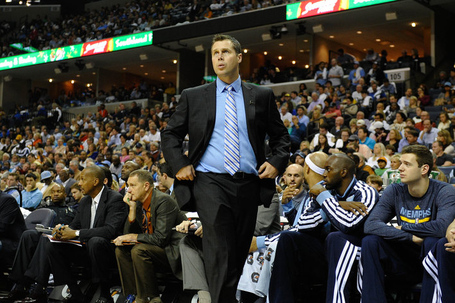 Guys, (turns chair around and sits informally) let's rap. This isn't a long recap, and it's not one of my better or more in depth ones. I don't feel like this game needs to be broken down anymore, because this game has been broken down four or five times already in the first eight games of the season. We know the story, and tonight, Memphis confirmed what we already knew, but weren't really wanting to admit. The Grizzlies are simply not a very good basketball team at the moment. They just aren't. Each time they are pushed, they fall down. When they get punched, they pout and moan. They have little heart, and they do not fight back. They have gotten much worse on offense, they cannot hold on to the basketball, and they cannot defend. They are uninspired, lethargic, and not hungry enough to outwork other NBA teams.

Marc Gasol checks in and out of ball games throughout the night, Zach Randolph cannot get his offensive game going without the benefit of foul calls, and Dave Joerger has done a poor job managing rotations. There is separate, but very equal blame to go to everyone on the entire roster, with the one exception being Mike Conley, who will collapse down the stretch if he has to carry the dead weight of this team on his shoulders all season.

If the season ended today, Memphis would not only miss the playoffs, but they would also dismantle this group of guys who simply look disinterested in getting things done. And for now, that's ok. We can afford for these guys to be a bad basketball team in November. We cannot afford for this to happen in March and April. There is time for the Grizzlies to find the cure to what ails them, but it will not happen, it won't even begin to happen, until each person, to the man, decides they want to be better. The talent is there. The ability is there. The effort, the drive, and the will simply are not. I don't know how we fix that, and I'm not even sure why it's broken in the first place. But it is broken, very broken, but not beyond repair.

In the words of my man Gandhi, "It's gut check time, baby…" The Grizzlies are about to head on a long, four game West Coast road trip, one that will see them take on the Clippers and the Warriors before heading back home, and if they do not show any more grit than they currently have, they will return home 3-9, with the San Antonio Spurs waiting on them. We can only hope that the Grizzlies begin to gel during this extended time on the road, and begin to rediscover their identity and their winning ways.

the talent is still very much there, they simply need to find their will.

There is an old saying that "Basketball games don't really matter until after Christmas." And while it is true that the intensity and meaning of each game begins to ratchet up a notch as the year goes on, the Grizzlies need to make sure each game, each minute, and each possession of this current road trip matters a great deal. Once they flip that switch and start scratching and clawing for every point and every win, rather than sitting back and waiting for teams to roll over for the mighty warriors who fought their way into the Western Conference Finals a season ago, there is no doubt in my mind that they will start to prove that they are capable of beating any team in the league on any given night. The talent is still very much there, they simply need to find their will.

For what is probably a more upbeat recap, check out Toronto's take at Raptors HQ.

[1] Not a slight against Toronto, but on paper, Memphis is the better basketball team, despite Toronto's far superior athletes.

[2] I sincerely apologize for how epically filthy that sounds.

[3] It's the word I made up for when I am paralyzed with fear because of a female. I think this is how I would respond if I ever actually got to meet Nasim Pedrad.