What do you do when your team finds themselves on the wrong side of a 20-4 run. Hate Watch. That's what!

We pick up the Raptors v Grizzlies game with 2:20 left in the 3rd quarter. The Memphis starters have whittled down an 11 point lead to a tie game. They've played the entire 3rd quarter so far, and are looking (and playing) like they are gassed.

Toronto announcers are making small talk about the Bulls and Derrick Rose, perhaps in an attempt to deflect their viewers' attention from the fact that they've given up a double digit lead and look all out of sorts. After some early ball movement, the ball winds up in Ed Davis's hands with a shot from the left block. He misses, but Tyler Hansborough fouls Gasol on the offensive rebound attempt and Gasol makes 1 of 2.

Prince forces Derozan into a tough fadeaway jumper that he airballs. Unfortunately, the shot misses so badly Amir Johnson corrals the offensive rebound over Marc Gasol, despite Gasol being in decent position.

Good ball movement and good off ball picks from Ed Davis result in Tayshaun Prince stepping one foot inside the Corner 3. Miss. Davis nearly grabs the offensive rebound, but has it ripped away.

In semi-transition, Conley picks up DeRozan and Prince cross-matches on Lowry. Derozan steps into a jumper that he makes easily over Conley.

Conley walks the ball up, throws a wild pass out of a trap, but the Grizz retain possession. Marc has the ball in the high post with the paint about as open as it will get for the Grizz personnel. This is exactly the situation the Grizzlies want. Gasol makes no move, no dribble, and instead settles for a jumper with Johnson all over him. Worth noting that Gasol appears absolutely gassed (he visibly struggled to lunge after the wild Conley pass out of the trap).  Tyler Hansborough, tucked in the left side of the paint, may look like Serge Ibaka. 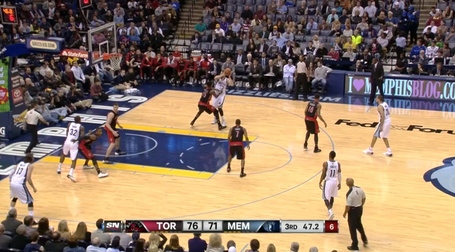 Lowry initiates TOR offense into an immediate pick and roll. 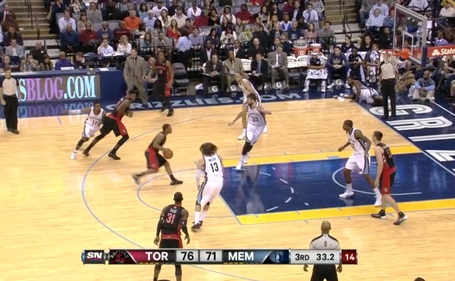 Conley gets hung up in the screen.  Gasol, after standing for a beat, is slow to react to the paint, and Lowry makes an easy jumper.

Not enough time to go for a 2 for 1, Conley walks the ball up, which he would do anyway, because he has played the entire quarter, led a furious comeback, and is dog tired. After a high screen and roll, Conley dribbles the ball off his leg.

Toronto subs Rudy Gay for Amir Johnson for the final possession to play small and MEM responds with Bayless for Conley and Franklin for Miller. Subbing Conley makes no sense (he's their 2nd best defensive guard) until you realize he's so tired he can barely stand. Bringing in Franklin, rather than TA, is just strange. Lowry travels and MEM gets a last second heave that misses.

MEM opens with JB-TA-MM-ZBo-Davis, TOR opts for Terrance Ross, Rudy, Psycho-T, Amir, and a gentleman I did not know existed named Buycks (pronounced Bikes, so we'll go with that).

TA forces a Rudy Gay Memorial Missed Pullup Jumper, and with this MEM lineup you know where the ball is going. ZBo catches the ball on the right block. Check out the difference in space from the previous screenshot. 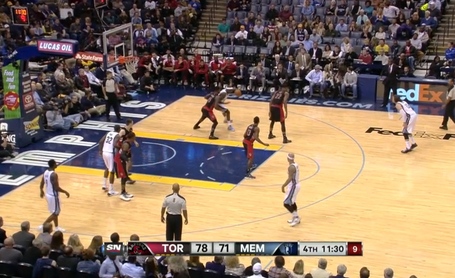 Even with Miller on the court, Rudy is so long he effectively guards both men. Ross ignores Bayless, and TA's man effectively doubles Ed. ZBo attempts to pass out, but Rudy picks it off and Bikes gets bailed out with a foul call on the fast break and eventually makes 2 free throws.

Memphis gets a shot clock violation after Ed nearly turns it over on a dribble move that he has to be able to make.

Thankfully, TOR gives the ball to Rudy with TA on him, and he airballs a long 2.

After Amir fouls ZBo in the post, MEM re-sets, gets some nice ball movement, but Miller misses a lightly contested 3.

Terrance Ross gets the OREB, tapes a cheetah to his back, and nearly gets a breakaway dunk if not for Ed Davis fouling him. Ross makes both FT's.

Memphis replaces TA with Conley, who sat out less than 2 minutes of game time. The ball goes into ZBo, who travels initiating his move.

For those people that want to criticize lineups with no spacing, check the next Raptors possession out. 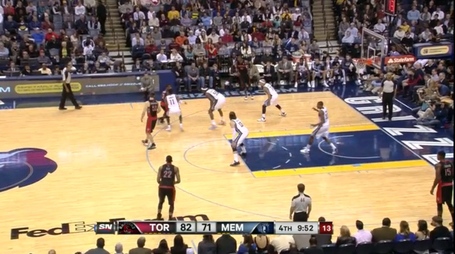 This is proof that almost every team deals with spacing issues, in some form or another. Rudy and Amir are not exactly Danny Green and Matt Bonner. All five Grizzlies are focused on the strong side. Ed has planted himself firmly in the paint. His man, Amir Johnson, receives a cross court pass. Davis recovers all the way from the paint to contest Johnson's corner 3 that misses badly. Then Davis corrals the rebound that came right to him.

Memphis works the ball to Conley in the corner, who cans an open 3.

This is the first made shot of the Hate Watch. About 5 minutes of actual game time, but a lifetime for a Hate Watch. Grizzlies foul Amir Johnson in the lane off of a pass from Rudy, and he makes both FT's.

Raptors announcers recall that when the new management first came to Memphis, they asked Coach Hollins to play fast.  Hollins resisted because his roster wasn't suited for it. They seem to imply that playing faster is the issue, which it's not at all, since the Grizzlies are playing almost an identical pace to last year.  Miller misses a long 2 off the bounce, and the Raptors announcers have segued into talking about how Memphis doesn't have enough shooting and they need to work the ball into their bigs.

In the meantime, for no apparent reason, Mike and Ed get caught in a cross match, with Ed on Rudy and Miller on his man. This is probably Ed's fault, and is the second time a weird semi-transition cross match has resulted in some weird defensive matchups (it appears to be a rule in semi-transition to pickup the player on your side of the court, rather than forcing a player caught on the wrong side to chase his man across the court. Don't remember it happening last year). Regardless, Ed defends the Rudy Gay Memorial Missed Jumper, but Hansbrough beats Miller's box out and ZBo for an offensive rebound, and is fouled. He makes both FT's.

Raptors announcers now go to the hammer. "There is a place for analytics," they say. "But it can't be the whole thing.  You need basketball people with an eye for the game... if it's all analytics it's not good for the game."

I can assure the Raptors announcers that analytics people hate what they are seeing just as much as basketball people. In the meantime, ZBo misses a short jumper in the paint.

Bayless gets caught in the air, Rudy steals his pass, which leads to a Terrance Ross dunk.

What did we learn?

1). Ed Davis is not to blame. He was not great, made some errors, but generally outperformed ZBo (who was an abject disaster) during this stretch.

2). Turnovers are - again - the issue. Part of Grit and Grind is garnering offensive rebounds, and not turning the ball over. This helps mitigate the Grizzlies shooting deficiency by simply getting more shots. You can't win not shooting well, AND taking less shots. For reference, the Grizzlies have only two players that are hitting their career average for OREB rate: Tony Allen, whose effort and determination were clear in this game, and in general, the season.

The other is Ed Davis, who despite all of his flaws, will always rebound over 10% of his offensive rebound chances, which is a pretty good number.

3). During this particular game, part of the Grizz loss happened BEFORE this stretch. The starters were gassed. The starters cut a double digit lead down to a tie game, expended a ton of energy, and got no relief. What happens when you're tired? For starters, you don't go after the extra shots you need. You don't hit the offensive glass. You don't go for steals. But you also...

4). DON'T ATTACK THE RIM - Look back at this Hate Watch. Not a single attempt in the paint. And, with all due respect to the Raptors announcers (who are actually pretty good), the Grizz did get the ball to their bigs. Gasol settled for a jumper in the post. ZBo turned it over twice, and missed his other attempt. Ed missed his one attempt and fumbled another that led to a shot clock violation.

More: What happened to the Underdogs?

Conley is, right now, the only Grizzlies player that gets shots at the rim. He has attacked relentlessly. But he can't do it on his own, and it's not just because he is probably not good enough. Attacking takes energy, and even Lebron James settles for jumpers when he's gassed.

The biggest culprits are Gasol and Randolph. Through a mix of inability and unwillingness, they have not been able to carry the offense consistently. At least for this Hate Watch, a lack of touches was not the problem.

When your offense relies on jumpers, you will go through stretches where you don't score. Jumpers are high variance, and low efficiency.