A meeting that both sides probably mark on their calendar and yet probably dread at the same time. Their history has quickly grown deep, but do the Grizzlies have enough chemistry under Dave Joerger to pull out a win?

The Memphis Grizzlies and Los Angeles Clippers have one of the most even-matched histories of recent recollection. Because the Clippers were a disaster before they signed Chris Paul, the overall record in this matchup is very even over the course of the Grizzlies entire franchise history. Overall series record 41-41, and neither team has an overwhelming advantage at home, with home court only providing a 63% winning percentage.

So you're telling me there's a chance? Yes, I am. Even with the Grizzlies rough start, the primary factor in their past two wins have been the resurgence of their bread and butter, the inside game. The obvious beacon of light has been Zach Randolph who has taken full advantage of favorable match-ups as of late. ZBo has a full octane challenge on hand in Blake Griffin, but history will still tilt towards Randolph until shown otherwise. The biggest concern for Memphis will probably still be Chris Paul.

Point Guard: CPIII is obviously a handful or two, or three. He's going to score from all over the court, and if he can't hit 25-30 pts then he'll still be dishing it out to teammates. Paul has yet to register less than 10 assists in a game this season, and he's reached near 20 a few times. Mike Conley has also been playing lights out, and the last time these teams met (2013 playoffs) Conley showed the nation that he had the ability to play up to CPIII's level, even in the big games. This could end up being on the best match ups of the night, but I still have to give a slight edge to Chris Paul at this point in time.

Shooting Guard: Oh J.J. Redick, the one that got away right? Everyone recalls the rejoicing over the return of Mike Miller, but early on it was Redick for whom the Grizzlies fans pined. And boy, got away he did, indeed. He's only scored single digits in one game of 2013-14, and he's breached 20 pts three times while shooting 50% from the field and 40% from three-point land. That being said, he's not going to give you much outside that shooting, and we'll see how those percentages look with some TA and GnG applied to them. And to just briefly mention the Grindfather, his offense hasn't looked too shabby as of late.

Small Forward: This should be a nice assignment for Tayshaun Prince, who has shown signs of pre-stomach-virus-Rudy-Gay-Trade-Hangover existence in the past couple of games for the Grizzlies. Whether it's Dudley or Matt Barnes against Prince, I expect him to surprise a few people tonight. Jared Dudley will take his shots, and Lord knows shooters tend to find net against the Griz, but if Memphis can secure the paint, I think his impact will be significantly limited.

Power Forward: The marquee match, perhaps. Everyone has seen the video evidence of how Blake Griffin and Zach Randolph abuse each other (or I mean Randolph abuses Griffin, solely), and Griffin has been a monster so far this season. Griffin is averaging well over twenty points a game, and filling up the stat sheet with double digit rebounds and a surprising amount of assists. Blake's defense isn't living up to his offense, as he's found himself in foul trouble for almost every game this season. Zach Randolph can bawl. Zach Randolph is a bawl. 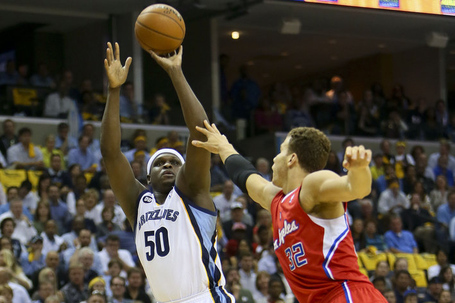 Center: Deandre Jordan is also riding the Clippers' wave of success, in the statistical sense. He's putting up career high averages thus far, and showing intensity on the defensive end (which, like Griffin, is getting him into some foul trouble). Athleticism isn't always the best matchup against Marc Gasol, but the man is the reigning Defensive Player of the Year for a reason, and I expect Marc to use his prowess to help limit Jordan's offensive rebounding that fuels much of his scoring.

Bench: The Clippers feature the normal Griz Killers in Matt Barnes and Jamal Crawford. When you combine that rotation with Redick coming off the court, it's a scary amount of shooting potential. But if the Grizzlies can play defense the way they have the past two games, it'll be left just as that ... potential. I'm sure someone off the bench will go Travis Outlaw on the Griz, but this could be the time for Memphis' bench to shine from outside as well. The tenacity of Koufos and Miller should provide the Clippers with a few frustrating hustle moments, and Quincy Pondexter might settle into the Bat Mask soon enough to balance out a cold streak by Jerryd Bayless.

Final Prediction: Grizzlies 89 - Clippers 88. I think it's going to end up as "one of those games." I expect a handful of players to get hot for stretches, but points in this game will mostly be hard-earned. I just hope the officials and the foul line don't dominate the headlines; we all know how these two teams can behave around one another.