As your Memphis Grizzlies end their first extended road trip of the season tonight at Golden State, it seemed fitting to dust off an old favorite (of mine at least.) Let's take a deeper look at what has worked well so far through a seventh and a half of a season (and what hasn't) in another installment of "Griz in a Box."

Share All sharing options for: Griz in a Box: Early Season Observations

This season has so far truly been the best and worst of times. From home losses to the Pelicans and Raptors to a 3-0 start on a 4 game California road trip, the Grizzlies have been poked, prodded, debated and declared dead after 8 games. As they rise from the premature proverbial ashes, basic and advanced statistics, in addition to film study, enables us to better piece together the puzzle of what this team truly is at this point in the season.

Who is fitting in to the system, who is falling behind and which of Coach Joerger's lineups is having the most success? The answers are in the eye in the sky and the Griz in the box. Let's dive in...

The following information is courtesy of NBA.com/stats and basketball-reference.com

Most realistic Grizzlies fans probably weren't expecting Memphis to become Houston or Golden State from the three point over night, especially after the only major addition to a roster that finished last in three point shots attempted was Mike Miller. Granted, Miller is a tremendous three point shooter, shooting 41% for his career from beyond the arc. However, Miller is at the tail end of a career which has been riddled with injuries. Despite the fact he is playing 23.5 minutes per game, about 10 more than most anticipated, he is not the solution to the team's problems.

So where are the issues, and how can they be addressed? Let's start with the team's shot chart from 3 point land... 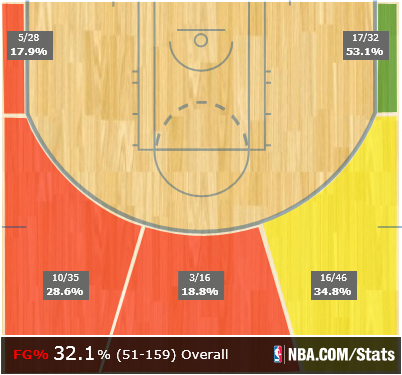 A couple of things jump out right away. For starters, the team has attempted far too many shots from outside of the corner. That is not to say that opposing teams aren't defending that area well, or that scheme may dictate these types of shots. The corner three, however, is one of the most efficient shots in basketball. The 18% from three in the one corner is an aberration; that is 21% below the league average and unlikely to stay that low. From the opposite corner the Grizzlies are shooting 14% above the league average. The corner three would give the Grizzlies the efficient shot types they need and should be where the team schemes to "let it fly" from.

How do you get those types of shots open more often? It can be as simple as dribble penetration. Take this series of of screen shots from the Clippers game this past Monday as an example:

Kosta Koufos comes up to set a high pick on Darren Collison for Mike Conley to get around. Collison chooses to go over the pick, resulting in him being a step behind Conley. Notice the length of Koufos establishing a solid pick and both Mike Miller and Quincy Pondexter in opposite corners. 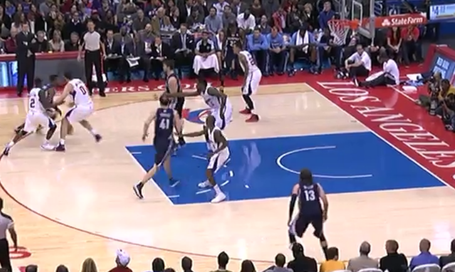 Byron Mullens rolls over to help Collison to try and cut off penetration by Conley. Koufos rolls to the basket, forcing Jamal Crawford to step in to the paint to help cut off an easy lane attempt.Notice Pondexter and Miller staying put for the most part; overloading the strong side of the defense will hurt the Clippers momentarily. 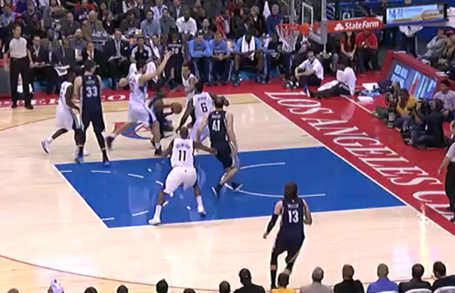 Marc Gasol steps up and sets an additional pick on Collison. Matt Barnes plays off of Q-Pon a bit to help on the drive, DeAndre Jordan and Byron Mullens are in the area and Jamal Crawford is still in the paint. At this point, Crawford should realize how far away from Miller he is. Barnes is still in a position to make a play on Q if necessary; Crawford is not. 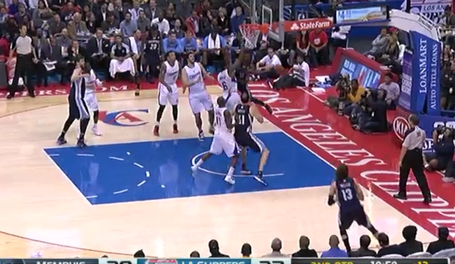 There is literally no one within 25 feet of Mike Miller, one of the greatest three point shooters in the world. Mike Conley recognizes this on the drive and kicks it to an open Miller in the corner for three. 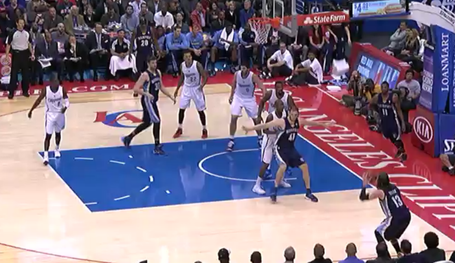 To top it off, Kosta Koufos does a great job sealing off Crawford from getting back out on Miller. He is trapped and the only thing he can do is watch the Mystic Wolfman do his thing.

Dribble drive penetration into the strength of the defense is not easy. If players like Conley, Jerryd Bayless and Nick Calathes when in can get the defense to collapse, shooters in the corners is the most efficient way to make them pay. It doesn't hurt to have a massive Greek guy there to keep them from recovering, either...

In September, I took a look at two players in particular who I felt would be pretty important to the Grizzlies' success this season. One of them was Mike Conley. In the piece "In Mike Conley We Trust" I discussed one of the major ways Mike needed to get better was with finishing at the basket, and that point was made with more of an overall team focus in this piece by Kellymelvina. Conley has struggled from three early in the season, but that appears to have recovered a bit these past two games. Outside of that, he is shooting a career high percentage wise from both the field and from the free throw line. Here is a look at his shot chart from last season and compare it to this season so far: 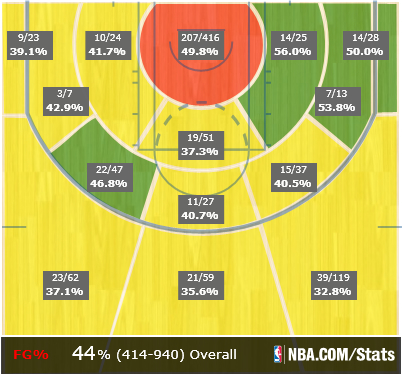 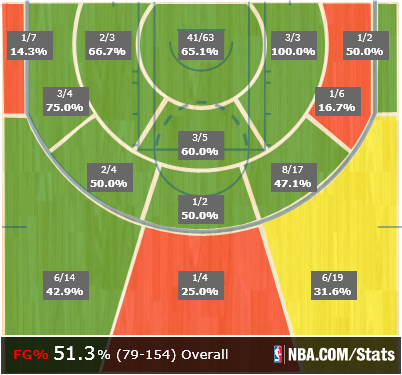 It is early, but you can see the major area of improvement and focus so far has been in the paint. Conley appears to have made this his point of emphasis, and it is shining through. His 65% is almost 9% better than the league average, and adds another dimension to his game. As a playmaker off of the pick and roll, as we saw above, he can either drive for the lay-up, get fouled and go to the line or kick out if the defense collapses to an open shooter. Mike Conley has thrived so far in this new offensive system, and hopefully it will carry on as the season rolls along.

Another focus piece in the off-season was about Kosta Koufos and how key he could be to the Grizzlies' success this coming season. He has shown in the past three games how much of an impact he truly can make. In about 16 minutes of play, Koufos has averaged 6.7 points, 6.7 rebounds and 2 blocks. The Clippers' game was truly impressive, as Kosta scored 10 points, grabbed 9 boards, had 4 blocks and 2 steals in 18 minutes of play. Koufos is not just a rim protector and glass cleaner, however; he has a post game that had the potential to blossom. Here is an example from the Clippers game, in which he shot a perfect 5 for 5 from the field:

Look familiar? Aside from Gasol being on the opposite side and on the elbow instead of the high post, basically the same set, with Pondexter and Miller in opposite corners and Koufos setting a pick for Conley.

Blake Griffin steps up to hedge on Conley, giving Darren Collison a chance to get back under Conley to cut him off. Koufos begins his roll, with DeAndre Jordan guarding Marc Gasol but conscious of where Koufos is heading. 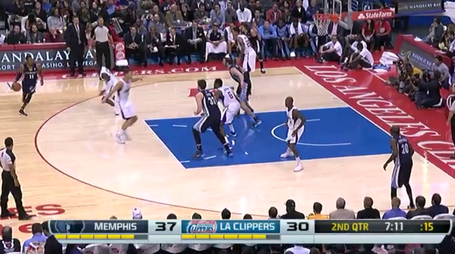 As Collison recovers, Griffin runs to gasol, protecting Jordan as he adjusts to Koufos' positioning in the paint. Gasol is not open at the elbow and notices Griffin and Jordan switching, so he will pop back outside the paint and allow Koufos the chance to go at a not quite set Jordan. 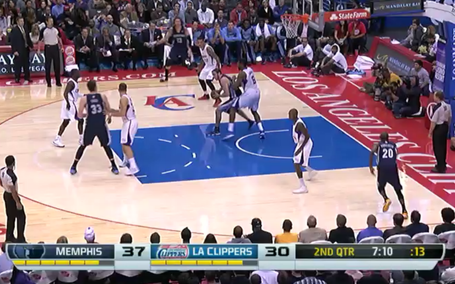 Look at the space Kosta has to operate! Miller and Q are being honored for their three point shooting, Griffin cannot collapse or else Gasol will have an elbow jumper and Conley is on the perimeter as well. There is no one in the paint but an off-balance DeAndre Jordan, who is going one direction while Koufos goes the opposite and hits one of his patented hook shots.

As Kosta develops his post game, he will have counters to his hook and will be able to use his height and footwork to get opposing bigs in trouble. This Lineup (Conley/Pondexter/Miller/Koufos/Gasol) has the potential to be a monster, and adds credence to the argument that Koufos should be the 3rd (and only) big off the bench at this point. 23-25 minutes a game would get both Marc and Zach Randolph good rest, and as long as Koufos continues this rate of play, the Twin Tower lineup can carry on.

Sustained execution of offensive sets is a key to keeping the winning feeling.

The Grizzlies have had their struggles, this is painfully true. They appear, however, to begin to be meshing together and finding themselves within Coach Joerger's system. As the season progresses, it will be interesting to see if Zach Randolph can continue his impressive stretch of play, if Mike Miller can stay healthy and what will become of Tayshaun Prince and Ed Davis, two underachieving pieces who could be paired in trade discussions.

However, as the team continues to find the corner three, as Mike Conley continues to develop his game as a play maker and as Kosta Koufos grows into a rotation fixture, this team will find sustained success.