In the first game of the season, the Grizzlies were outclassed by a Spurs team that was just better that evening, especially in a lop sided 2nd quarter. The Grizzlies have already endured quite a bit this season; can they rise to the challenge against one of the top teams in the NBA?

What Vegas is Saying:

For the Spurs Perspective, Check Out Pounding the Rock

The last time the Grizzlies played a game in Memphis, there were major questions as to whether or not this team was, after 8 games, a tremendous disappointment. The offense looked convoluted and turnover riddled, the defense looked uninspired and over matched. Some fans were freaking out, and if you didn't know any better you would have thought the sky was falling...

But then, the Grizz went out to California. They did something that has only happened three times in almost thirty years; they swept the 4 California teams. A tight win over the Lakers, a strong showing against the Kings, the best performance of the season so far against the Clippers and a Grit and Grind victory over the Warriors later, folks are feeling a little bit better about themselves.

Zach Randolph has gone all 2011 on us, Marc Gasol averaged almost a triple double on the West Coast swing and in the most recent contest against the Warriors the Grizzlies were carried at times by the heroics of Mike Conley and Tayshaun Prince. No, that isn't a typo, Tayshaun hit two big shots in overtime to help the Grizzlies put away the Warriors. The Grizzlies have appeared to rediscover the Grit and Grind that was stated as dead by several during the worst of times. The road was good to the Grizzlies.

While the Spurs are certainly an elite team, their recent dominance may be a bit misleading.

The road back to Western Conference contender leads the Grizzlies to the Grindhouse and a date with the respected San Antonio Spurs. San Antonio, not shockingly, is on a roll. The Spurs are 10-1 on the season and have won 8 straight games. However, after doing a bit of research, the record may be a bit misleading. The 8 game win streak came against teams with a current combined record of 35-60, including the Boston Celtics, Philadelphia 76ers, Utah Jazz and Phoenix Suns. Not exactly murderer's row.

Despite this fact, the Spurs are still winning a lot of basketball games, including the season opener 101-94 against these Grizzlies. So how can the Grizzlies continue the 4 game winning streak and find a way to beast a Spurs team that seems to have their number? Some keys to watch for in another installment of a terrific divisional rivalry.

To paraphrase a great line from the movie "Moneyball", we are all told at one point or another when we can no longer play the young man's game. For me, I stopped playing basketball in high school and football in college. Some are told when they are 18, some when they are 40, but at some point, we are all told. Time stops for no one.

It appears that time may have finally be ready to tell Tim Duncan. He is currently averaging a career low in minutes, rebounds, shooting percentage, shooting efficiency, steals and points according to ESPN.com. Here is his shot chart for the season; not the best. 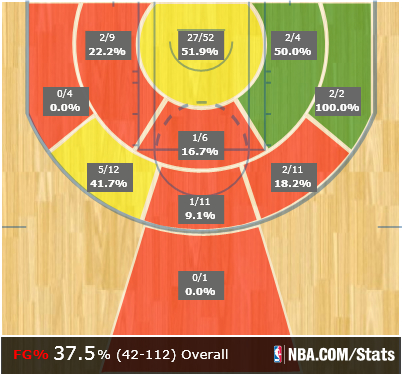 The minutes are likely a part of Gregg Popovich monitoring the time that the elder statesman of the Spurs plays during the long grind of the season. Duncan will likely recover from the slow start to a degree. However, fans and pundits alike have been predicting the downfall of Duncan due to age and mileage for years; it is possible the time has come.

If this is indeed the case, how can the Grizzlies take advantage? Duncan is still a very good defender, and his ability to use his length and to anticipate enables him to be a threat to block shots even in the twilight of his career. Forcing Duncan to move around the block and defend the pick and roll, however, would put him in tough positions and allow for the Grizzlies bigs to get Duncan out of his comfort zone. Offensively, perhaps you allow Zach Randolph to defend Duncan at first, making Gasol more able to defend the rim and off of Tiago Splitter some.

Let's take a look at two player's stats and shot charts so far this season. 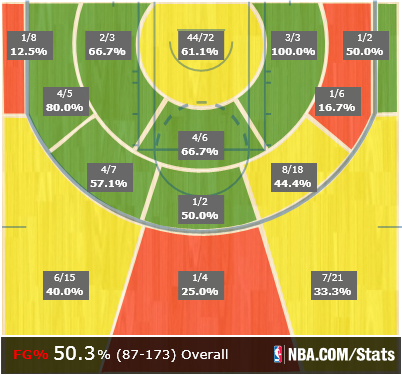 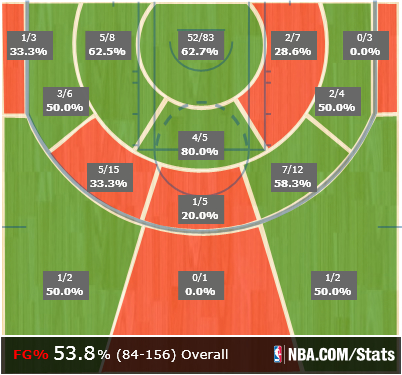 Player A is Mike Conley, player B is Tony Parker. Remarkably similar numbers, the major difference being free throw percentage and shot distribution; Conley shoots far more threes than Parker. Conley has really come into his own and has been the Grizzlies most consistent performer so far in the young season. If Mike is able to neutralize Parker, and Tim Duncan continues to struggle? The Spurs may be in trouble.

The Spurs are experts at finding open perimeter shots off of either dribble drive penetration from Tony Parker or Manu Ginobili, but they can also find open shooters from the post. The Spurs execute their offense and are experts at defensive rotation, trusting their teammates while moving where they need to be to cut off slashers or close out on opposing shooters.

The Grizzlies need to follow in the Spurs example. When they have played well this season, they have executed offensively, rotated and communicated defensively and penetrate the defense off of picks and screens, opening up lanes for slashers or spots for shooters. Memphis needs to find a way to get the Spurs out of their comfort zone; vary defensive match-ups and alignments, run various low post combinations to get the ball inside to Marc and Zach, hit perimeter shots when the Spurs close down on the paint.

The Grizzlies need to take the fight to the Spurs, get them uncomfortable and execute them out of their rhythm.

Memphis showed flashes of what it will take to beat a great Spurs team. In order for it to happen, execution of scheme will be key.

The Grizzlies will start fast, attacking and feeding off of the energy of the Grindhouse. Kawhi Leonard will attempt to use his athleticism to get around Tayshaun Prince, while Danny Green will hit a couple open threes off of an over-helping Tony Allen to keep the game close. Mike Conley and Marc Gasol will make the Spurs pay for closing out on Zach, and once the Spurs are forced to defend everyone the same, Zach will close out the game in the fourth quarter.

Memphis Grizzlies back in the Grindhouse for the San Antonio Spurs