As a great American holiday approaches, many in Grizzly land are down. Marc Gasol is injured and out for the foreseeable future, the team has underperformed and the possibility of exceeding last season's success seems to be leaving as quickly as some relatives do after Thanksgiving dinner. Despite these downsides, there is still much to be thankful for this Thanksgiving as Grizzlies fans.

It has been a tough few days, hasn't it Grizzlies fans?

Marc Gasol's injury to his knee certainly puts a damper on things. Marc is extremely important to what the Grizzlies do; Matt "TheReal" Hrdlicka did a great job showing what his absence does (and doesn't) mean here. Offensively, Marc's presence as both a floor spacer and facilitator will be difficult to replicate and impossible to replace. Defensively, while Marc has not been the presence consistently on defense as he was last season, he was showing glimpses of his old self as the season went on. Perhaps the rest will do Marc well, and he will come back with force. Until then, enjoy this Gasol tweet.

I want thank everyone for your support. I really appreciate it! #illbeBACK http://t.co/bNnoYRyNuw

Hurry back Big Spain, we will miss you.

Add this injury on top of the fact that this team has underperformed according to the fan bases' lofty (and rightfully so) expectations, and this has been a challenging beginning to the season for the disciples of the Grit and Grind. The Rockets game did not help matters. Letting that one get away hurts, especially because it should have been won. The bench struggled, the defense was absent late in the second half and it was a mess of a fourth quarter. Whether it was a lack of effort, a lack of minutes for three bench players thrust into action up to that point (Leuer, Davis and Calathes) or both, whatever it was it was unacceptable.

However, as the distinctly American holiday of Thanksgiving draws near and families gather to partake in the distinctly American past time of gorging ourselves on turkey, stuffing and football, let's take a moment and look at things that we as Memphis Grizzlies fans can be thankful for heading into the next stage of the long grind known as the NBA season...

It Could Be Worse

Unfortunately, it was a bad weekend for injuries in the NBA. Andre Iguodala of the Golden State Warriors, also known as the biggest PG ever/the Warrior's starting small forward, "heard a pop" and will be out indefinitely, like Marc, but with a strained left hamstring instead of a sprained MCL.

Derrick Rose appears to have gotten the worst of the injury bug, at least up to this point (knock on wood), with a torn meniscus that will require surgery and for him to miss the remainder of the season. With all of the build up to Rose's return from an ACL injury, this serves as a huge blow to the Bulls. Kirk Hinrich, Harrison Barnes of the Warriors and Kosta Koufos of the Grizzlies all just became that much more important.

Koufos and Davis: Happy to Have You

As Chris Faulkner recently said in a tweet, can you imagine if that trade had not happened now? You know, the one that sent Darrell Arthur and a 2nd round pick to the Nuggets for Kosta Koufos? 2nd best back-up center in the league behind-Omer-Asik-Kosta-Koufos? Started 81 games last year for a 57 win team in Denver Kosta Koufos? Yeah, that guy. He will be invaluable as the Grizzlies prepare for a stretch of about 12-18 games without Marc Gasol.

It will take the entire Grizzly village to match Gasol's production

It is, however, important for Grizz Nation to keep in mind this seemingly obvious but all too important fact; Kosta is not Marc Gasol. Matt Hrdlicka put it well; it will take a village. The key will be to get the three bench wings (Jerryd Bayless, Mike Miller, Quincy Pondexter) going offensively to pick up some of Marc's scoring load (in addition to Mike Conley and Zach Randolph, but more on that later) and it will be up to Ed Davis, Jon Leuer at times and Kosta Koufos to replicate Marc's defensive presence and overall fit in the offense.

It won't be perfect, but Kosta and Ed especially can be facilitators in this role. Take a look at this great Ed Davis find in the Spurs game: 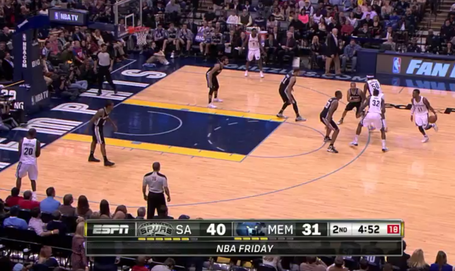 Davis and Zach Randolph set up a double pick, forcing Tony Parker to get through through two men and Boris Diaw to perhaps help off on Conley more than he would like. 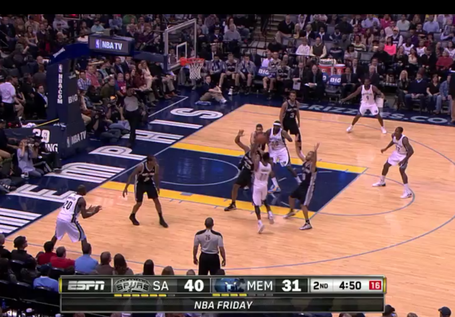 Diaw comes underneath Conley to cut off penetration, Parker is on top of Mike and Tim Duncan is guarding Randolph, who came down with Zach as rolled into the paint. There is no one currently guarding Ed Davis. 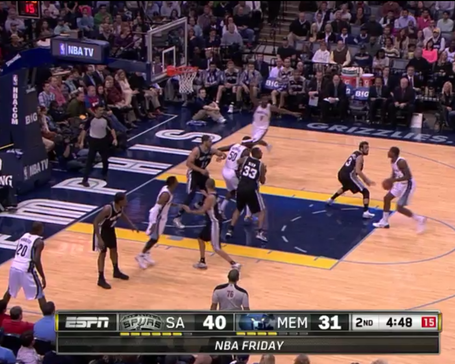 Because of this, Marco Belinelli deems it necessary to roll over on to Ed Davis, much like he would a Marc Gasol at the top of the paint. This decision leads to Ed making a wise call, finding the slashing, open and excited Tony Allen for an easy lay-in, since Duncan cannot react to TA without giving up position on Zach.

Davis and Koufos will both be instrumental to surviving without Marc. Ed, especially, needs to consistently pick up his game. A silver lining in this dark cloud is that it quiets trade talk for a while; this team needs both Ed and Zach right now. Ed Davis will have every opportunity to show his worth the next 6-8 weeks, so either he will show there is validity to the argument that he is the future at the position, of value in free agency or he needs to be traded while there is still value there.

They Have Been Here Before

See if this sounds familiar: star player suffers an injury, team comes together, team responds. Team faces adversity, team responds. Team trades away leading scorer and arguably an all-time franchise great for a young power forward and Tayshaun Prince, team responds. Time after time, possible knockout punch after possible knockout punch, this team keeps getting up. The legacy of Grit and Grind has practically been forged in fire, established in the eye of the storm, the mentality of an entire city shining through its professional basketball team like that first ray of sunlight poking through at dawn.

This team is a bunch of fighters. And I freaking love it. If I had to pick any NBA team to go into a dark alley with, it would be the Memphis Grizzlies. It took a while, but we have seen flashes of that undeniable mental toughness. The comeback in Golden State, the grinders of games against the Lakers and Celtics, the comeback against the Spurs after the Gasol injury. The Memphis Grizzlies, even in the face of pretty tough odds, will not quit.They can come back, they can still make it to the goals set for them despite the injury to Wendigo. The Rockets game aside, this team will rise up to meet the challenge.

They have done it before. They can do it again.

The Bench Wings Can Only Go Up

This excludes Mike Conley, who has played at an All-Star level so far this season Houston game aside and will likely only see his opportunities go up with Gasol out. It also excludes Tony Allen, who at times has looked like an animal slashing to the rim in new offensive sets and at times...yeah, Tony's a heck of a defender. He needs to stick shooters more and not help off the ball as much, but that appears to be a scheme problem just as much as a Tony problem.

Jerryd Bayless, Mike Miller and Quincy Pondexter have to be better. They will, partially because they can't get much worse. Between the four of them, they scored 16 points against the Spurs. Miller had 4 on 5 shots, Jerryd had 2 on 4 shots and Quincy had 0 on 0 shots in 7 minutes. 2 points averaged between the 3 of them is not good enough, especially considering their season averages last year were a combined 20 points. Once Q gets out of the Dave Joerger Dog House, all three will get minutes.They have to make the most of them.

The Grizzlies need scoring off the bench, or these Marc-less holidays will not be very merry.

Kosta and Ed cannot be depended on to fill Marc's scoring shoes; it will take Jerryd being the creator for himself as he learns to create for others, it will take Mike Miller the sharp shooter hitting 2 or 3 three pointers a game in the corner and in transition, it will take the Quincy Pondexter we all saw in the Western Conference Finals, decisively scoring the ball on slashes, drives and long range shots. If these things do not happen, these Marc-less holidays will be not be very merry.

This Thanksgiving, we all have much to be thankful for. Families, friends, health and shelter all come to mind. When it comes to these Grizzlies, continue to be patient and trying to find the positives.

They are there. At times, they are just hard to see.

The team will come together, they will find the way to play without Marc Gasol in the lineup and they will take advantage of a weaker December schedule to stay above .500. The sky continues to be in tact.