It's still very early in the season, and in Dave Joerger's head coaching career, but I'm starting to see a flaw repeat itself every few games or so.

We all have habits. Some of us have very intense, time-consuming habits, others just have a couple of quirks that most people don't even notice. I have a habit of changing my socks a couple of times a day (my feet sweat... a lot). In highschool, I bit my fingernails like no one's business (hormones are stressful).

One habit Dave Joerger seems to have adopted is a penchant for forgetting about his bench lineup. And by "forget about them" I don't mean that he leaves them buried on the bench, I mean that he seems to forget that they're out on the floor, playing in place of the starters. This doesn't occur with intense frequency, but it does seem to be on a regular schedule of showing up every six to seven quarters of game play. Here's the 4th quarter box score from last night: 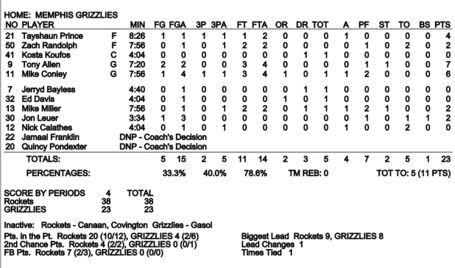 The Grizzlies entered the 4th quarter with an eight-point lead, and left the game with a seven-point deficit. The only starter to play more than 8 minutes in the period was Tayshaun Prince, and can't be validated with the excuse that the starters were getting gassed: not one player exceeded 35 minutes of playing time for the game.

Joerger simply left his bench in for too long without recognizing that the team was purging momentum and confidence, and the starters weren't prepared to conjure a 8-9 point comeback with seven minutes left in the game. I'm not sure if this is Joerger trying to support his bench guys, if he's seeing matchup advantages I am not seeing, if he literally just forgets to make substitutions or if the season is just so bizarre, thus far, that the Grizzlies get stuck in scenarios that leave odd lineups together for too long.

What I do know is that if it takes 21 days to break this habit, the Grizzlies might not be having the happiest of holidays next month.

PS: At least the van dyke is making a comeback. That's a step in the right direciton. BTW, it's not a goatee.