How Analytics are Failing the Memphis Grizzlies and Dave Joerger

Have analytics caused the Grizzlies to lose their way? Perhaps. But not in the way we think. We look at how analytics have seemingly failed in this young season, and perhaps a better way forward.

Share All sharing options for: How Analytics are Failing the Memphis Grizzlies and Dave Joerger

In a recent article, Ric Bucher looks at the difference between last year's successful Grit n Grind Grizzlies, and this year's struggling iteration. Among the highlights:

• Zach Randolph is the Grizzlies best player (Paragraph 2. Related: wut?), an assertion that a Tayshaun Prince quote - perhaps taken out of context - seems to support (Paragraph 9)

• Zach Randolph sees himself as a superstar because he carries four cell phones (What a diva!), including three smartphones (paragraph 7)

• The Grizzlies offensive woes are because the front office attempted to play a faster pace, with players ill-suited for the job (All of the Paragraphs)

Pace Is a Red Herring

This piece will be too long to focus on "changing the offense" (another problematic Bucher assertion), so let's focus on pace. Last year, the fondly remembered Grit 'n Grind Grizzlies played the slowest pace in the NBA, a plodding 88.4 possession per game last year. This year, the Grizzlies have upped their pace to a scorching 89.9 possessions per game, still dead last in the NBA.  Even more problematic, in the 6 fastest Grizzlies games (90 possessions or more) this year, Memphis has gone 4-2. Sort of a problem for anyone asserting that playing faster is central to the Grizzlies woes.

The Grizzlies played slow last year, and they have played only marginally less slowly this year. When you factor in that the entire league, on average, is playing 2.5 possessions more than the previous year, the Grizzlies increase of 1.5 possessions is 40% slower than league average.

So if playing fast isn't the problem, why does Ric bucher get quotes like this from Tayshaun Prince: "Early in the year we were playing a little faster, and (Randolph) wasn't as aggressive."

Or this, from an unnamed NBA scout: "It looked as if Joerger was trying to put his stamp on them and the players resisted. They were like, 'The other way worked, so why change?' I know they wanted to play faster, but they don't have that kind of team. They grind."

We've already established that the Grizzlies didn't lose because they were playing fast. But maybe part of the reason they're losing is because the players believe they're playing too fast. And this may get to the heart of the Grizzlies challenge going forward, and the next frontier of analytics as a whole: how do you get players to buy into your good ideas?

Free Points? No Thank You.

There is, perhaps, no better example of this than the "Two-for-One."  At the end of quarters, teams often have the opportunity to squeeze an extra offensive possession from a game by taking a quicker-than-normal shot. Shooting with roughly 32-36 seconds left on the shot clock almost guarantees you get an extra shot at the end of the quarter.

The "Two for One" has become a generally accepted strategy around the league. Still, some teams (most notably, Coach Hollins last year) eschew this strategy, perhaps because they don't want players taking "bad shots." On the surface, this seems like sound reasoning. You want your players hunting the best shot possible.  But that incorrectly frames the choice, which isn't that a good shot is better than a bad shot. It's that one shot (even the best possible shot your offense can generate), is better than two shots. And the math is pretty definitive that it is not.

No offense can run a play that guarantees two points, let alone three. But let's say that you have the NBA's most destructive player, Lebron James, and in theory you could run a play that guarantees James gets a shot in the paint. Well, Lebron is shooting 74.8% on any FG attempt in the paint right now (shot chart below. Spoiler alert: there's a lot of green), or a shade under 1.5 point per shot!!!! 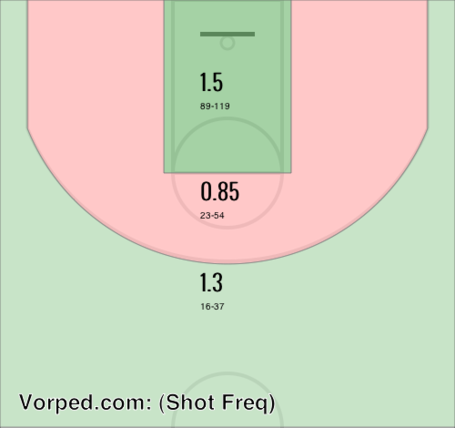 Because there's a decent chance that this sentence has never been possible for a high usage player in NBA history, I'll say it again: ANY Lebron James shot in the paint is worth 1.5 points.

The best shot from the best player in the NBA is worth 1.5 points. Therefore, for two shots to be less effective than one shot, a random shot generated by the Miami Heat offense would need to yield less than .751 points per shot.  Guess what? The Miami offense is much better than that (as is every NBA offense). Per Vorped.com, a random shot from the Miami offense yields 1.01 points per shot. So let's do the math:

1 shot from the most lethal offensive weapon possibly in NBA history: 1.5 points.

2 shots generated at random by the Miami offense: 2.02 points.

Two average shots are better than one "best shot possible", and it isn't even close. Even two random shots from the worst offense in the league, the Utah Jazz, beat one shot from Lebron James.

The Battle of Analytics

Despite all of the evidence, you see teams shy away from these "free points" all the time. Perhaps coaches overvalue their ability to call plays that generate points (seriously, if you guys have these great plays, call them more often. Like, every time down the court). Or perhaps there is something to the idea that allowing a player to take one slightly outside the offense shot will creep into the offense as a whole (you better be pretty sure about that, because you're sacrificing points on a nightly basis). Whatever the case, it again highlights that the battle of analytics isn't about being right (being right about the "two for one" isn't enough), or unearthing the next great marginal edge (perhaps it doesn't exist), or even getting players to understand the numbers (they don't need to).

The battle of analytics is a battle of communication. And it's a battle the Grizzlies have seemingly failed so far this year. 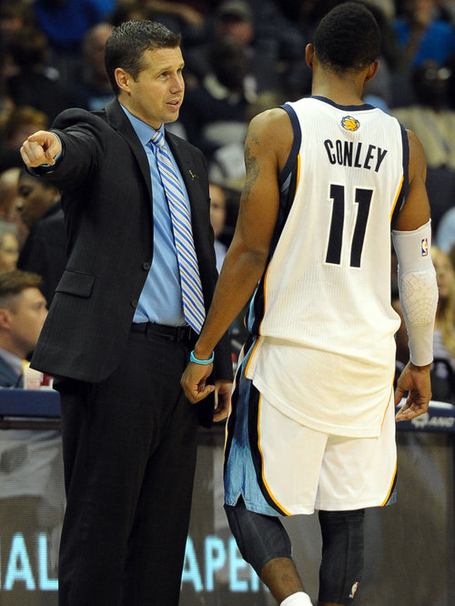 Basketball is a game that operates largely on muscle memory and reaction. When decisions are made in fractions of seconds, there is little room for "why".  Some people are able to process information quicker than others, but in general, the more information a person is asked to process, the longer that decision takes. Yet often, information branded as "analytics" carries a pretty high "why" quotient.

It's not that the players can't understand the numbers. Most probably could, or do. But why fight a battle you don't even need to win. When you're guarding Kevin Durant, attempting to perceive the slightest twitch of his muscles as a signal he's about to launch the quickest jumpshot in the NBA, the last thing I want that player to be thinking about is math.

The next frontier in analytics, the advantage that will supersede all others, is the battle for the egghead front office types to package their message to players in ways that transfer into on-court actions that produce more wins. The front office needs a lesson in marketing. It isn't enough to have a silver bullet if you're not the one firing the gun. It doesn't matter if a business has the best product in the world if no consumers believes it to be true. The front office must market their ideas to the players, just like a business markets to consumers.

Already, the Houston Rockets are doing something incredibly interesting. In a recent interview, Daryl Morey talked about their attempt to market ideas to the players. The Rockets installed flatscreen monitors above every locker that transmit stats at halftime. The stats take the form of "Goals for the Game." Perhaps they are focusing on offensive rebounding rate that night, or something as micro-level as the average distance between Mike Conley and the Houston Rocket charged with defending him (a metric that can now be tracked through SportVU).

By transmitting messages through goals and updating them in real time, not only are you speaking a player's language (athletes tend to be goal-oriented individuals), you are triggering emotions linked to pride, accountability and competitiveness - and emotions are far more effective motivators than stats will ever be.

Imagine a world in which you gave Tony Allen the goal of hounding Chris Paul within a 3 foot radius, and you could show not only Tony but all of his teammates exactly how he was succeeding or failing at that task during the game. That's a world I want to live in.

What the Rockets are doing is eliminating the gap between negative behavior and negative reward.

No longer are coaches hounding their players about getting back on defense, but showing them that they run10% slower towards the defensive end of the court than they do towards the offensive end (Kevin Love talked about this a few years back). Film sessions the day after losses can be brutal episodes of shame among your peers, but they do nothing to affect the outcome of a game that's already been played. What the Rockets are doing is eliminating the gap between negative behavior and negative reward.  If a player is failing at a goal, not only do the coaches know, but so do the players.  The Rockets have turned stats into motivators.

To bring this behemoth of an article full circle, John Hollinger must take a page from Ric Bucher's book. Bucher's job is not to report truth; it's to craft narrative. Whether Bucher believes what he wrote or not is irrelevant. The Grizzlies started 3-5, ZBo had a few good games on a 4-0 West Coast trip, and he found a scout that would go on record. The article writes itself. He has packaged the Grizzlies season in a way that is easily digestible to his readers, and really that's all he needs to do. Hollinger would do well to get back to his writer roots, and begin thinking about packaging his message a little more effectively.