Memphis Grizzlies in Boston to take on the Celtics

I hope the Grizzlies enjoyed the 63 degree weather in Boston when they got off the plane, because it's looking to get down below freezing tonight. Can the Grizzlies heat up in time to take care of the Celtics again?

Share All sharing options for: Memphis Grizzlies in Boston to take on the Celtics

The Memphis Grizzlies have a one-stop road trip in Boston tonight to face the Celtics that gave them a pesky fight in FedexForum three weeks ago. Perhaps, the departure of the Grizzlies from home, right before Thanksgiving, will give their minds some respite and a chance to refocus themselves towards playing basketball without any of the family distractions.

Yes, folks. It sounds like we're now searching for any sort of silver lining when the Grizzlies play; even we as fans need a mental break from worrying about how Marc Gasol's injury could affect the season.

Here's some more good news for Grizzlies fans. Thus far this season, the Griz are playing better on the road than they are at home, and you can say the same for the Celtics this season, too. Memphis has a knack for coming out with a "W" in Boston, going 3-1 in Bean Town over the past few years. The Grizzlies always seems to show up under the bright lights of big cities.

More: For the Celtics perspective check out CelticsBlog

When you look at the player matchups for tonight, most everything is similar from the previous meeting with the Celtics, save for two large, seven-foot bodies that won't be taking the court tonight. Marc Gasol and Kelly Olynyk are on the shelf, but Memphis still has a size advantage that should allow for solid games from Zach Randolph and Kosta Koufos. Tony Allen always shows up big against his former team, and I expect the Grindfather to be (responsibly) launching himself all over TD Garden tonight.

Mike Conley will need to bounce back from a weak showing vs Houston. Avery Bradley played pretty well against Conley in their previous meeting, but, believe it or not, Conley has continued to grow as a player since that game three weeks ago. Mike knows that an enormous portion of the Grizzlies offensive success hinges on his play with Gasol out. I look for Mike Conley to be all business tonight and to assert himself early on in the game.

Speaking of asserting yourself, Jerryd Bayless needs to start playing his way back to "an inconsistent but exciting player who makes big plays" rather than just the "inconsistent, crap-shooting eyesore" that he's been for a couple of weeks now. The last time Bayless hit double digits in scoring? Against the Celtics earlier this season when he exploded in the fourth quarter for 15 points. You can argue that that quarter has been Bayless' only solid string of play this season.

Hey, does someone named Quincy Pondexter play for the Grizzlies? No, yes, maybe? 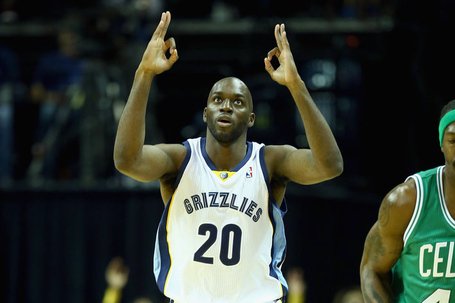 Matchup of the Night: Tayshaun Prince vs Jeff Green. This will be the duel that probably makes or breaks the game for Memphis. Prince is coming off the best game he's played in years, probably, and I'm betting that he feels much healthier than he did in the first game against the Celtics. Prince will still have his hands full with Green, who can get hot from outside and punish the Grizzlies on the foul line.

What the Grizzlies are probably thinking: Okay, we've got a weaker opponent who both struggles at home and against Western Conference teams. No one has family pestering them, so we should be able to go in and make a quick win out of tonight. We have to continue to find ball movement without Marc, and we have to find a way to put our foot on the gas pedal in the fourth quarter.

What the Celtics are probably thinking: We gave the Grizzlies a run for their money in Memphis earlier this season, and we nearly pulled off the upset if it hadn't been for Jerryd Bayless summoning his spirit animal. They won't have Gasol to take full advantage of our youth and inexperience, but Koufos is hard to keep off the glass. If we can get their big men in foul trouble this game could swing in our favor in the 2nd half.

Prediction: I think the Grizzlies bench gives us a boost that we've been missing, but this is a Celtics team that is playing with a lot more fire than we saw back on 11/4/2013. They're still a team that can give up big points, and they've still got one of the worst turnover ratios in the league. I see Conley and Allen having an early Thanksgiving feast of steals, giving the Grizzlies a big edge in transition points on a Boston team that can get lead-footed at times (worst rebounding rate in the NBA).