The Grizzlies relied heavily on luck last time they met the Celtics (yes, Jerryd Bayless catching fire this season is what I would consider "luck," unfortunately). Will Memphis need another lightning bolt, or can they win this game with solid execution from everyone?

The most common remedy for a shooting slump seems to be to "shoot yourself out of it." Personally, I hate the way that comes across. If you have a problem doing something efficiently, approaching the issue with reckless abandon doesn't really sound like the logical way to become more efficient.

That phrase is more than likely just a general tip-of-the-hat to probability than it is to methodology. There are probably countless drills and practical manners of reestablishing the shot of a basketball player, and I'm sure those practices are implemented by plenty of players whose stroke goes cold.

"Shooting your way out of a slump" should be the last step in the progression of getting out of said slump. After all, the shots can't start to go in unless they're taken. However, I'm not convinced that a slumping player, who, at halftime, sits at something to the tune of 2/9 from the field, is going to suddenly have something click for them and skyrocket to a 60% shooting percentage to finish the game. 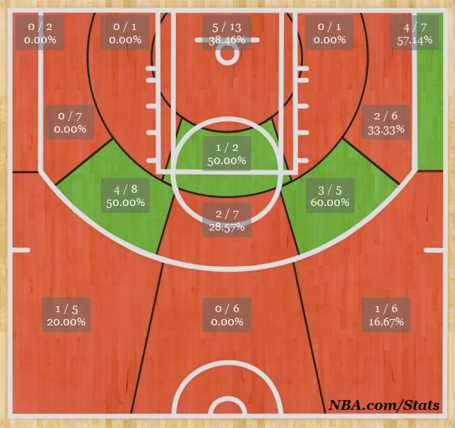 And then you have Jerryd Bayless, who might actually be the exception to that rule (or the exception that proves that rule, or the exception that disproves that rule.... one of those), as frustrating as that may come to Grizzlies fans. Part of the blame here could lie with Dave Joerger, who hasn't found the right role for Bayless this season, but Jerryd seems to be the last Grizzly to get on board the 2013-14 Rhythm (which is understandable considering no one really knows what that Rhythm is).

The Griz need bench scoring, and Bayless' resemblance to the shooter he was last season would take this team a long ways in acquiring that scoring. Tonight, I'm hoping I look at the stat sheet and see a nice, hearty 4/5 from Jerryd in the first half, because I don't like the chances of banking on another 15-point-fourth-quarter from him.

The Grindmaster from the last edition (vs Rockets) was split between Tayshaun Prince and Tony Allen (wut?)