Tayshaun Prince: Time to Get Offensive

As Memphis attempts to acclimate to a world without Marc Gasol for a few weeks, many players will be asked to increase their productivity. Tayshaun Prince will no doubt be a key in this process, as he draws off of his experience in basketball and his physical gifts to better the Grizzlies' offensive fortunes, as well as his own.

Share All sharing options for: Tayshaun Prince: Time to Get Offensive

Marc Gasol's place on this team is irreplaceable mid-season.

You are not bringing in Dwight Howard, Tim Duncan or another top-5 NBA center. You cannot completely replicate his unique ability to facilitate and pass. You cannot match his understanding of defensive placement, of timing and rotation. Marc Gasol is an All-NBA player for a reason, and he will be missed.

In his stead, others will have to step up. Zach Randolph cant go 5-13. Mike Conley can't go 2-14 and expect this team to win. Having struggling bench wings not able to score will also doom this squad. The offense has to come from somewhere in order to lighten the load.

It will likely have to come at times from Tayshaun Prince increasing his level of offensive involvement. He has responded for the most part; he played well at times against the Rockets, with 16 points on 7-10 shooting. 4 of those 7 makes were on jump shots, however, according to nba.com. This is far too much; he will not hit that many jumpers consistently. Prince would be wise to utilize other offensive means to best use his size, experience and ability to attack the post. Here are some ways this can be done while still playing within himself and the system:

Here is an example from the Pacers game a while back, while he was guarded by Paul George. 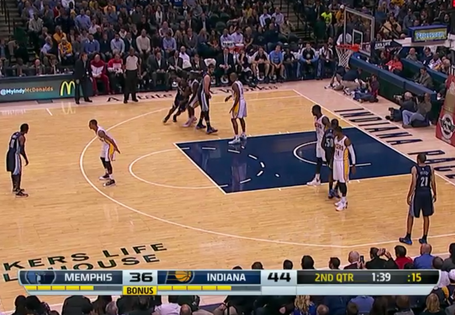 Beginning of a 1-4 set. Marc (insert sad face) sets a screen for Tony Allen on one side of the court. 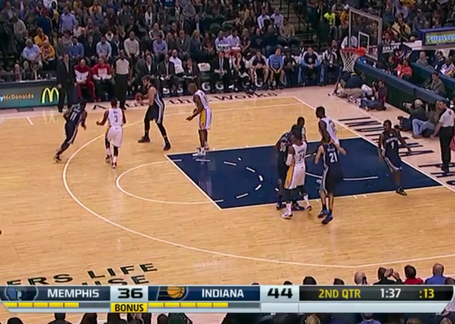 Marc gets the ball at the elbow and Mike Conley will use him as a screen around. Tony Allen is now on the opposite block, Zach Randolph in the high post and Tayshaun is next to Z-Bo. Paul George loses his man and gets caught up in Zach. Tayshaun will be flashing to the opposite block. 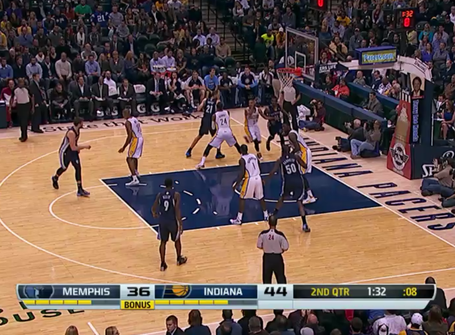 David West has to honor Marc Gasol's elbow abilities. Mike Conley cuts through, followed closely by George Hill. George is all alone on Prince. One of Tayshaun's great strengths is his length; he is a 6'9" player who plays longer because of his tremendous wing span. Even the taller Paul George cannot contend with a Prince hook shot consistently. 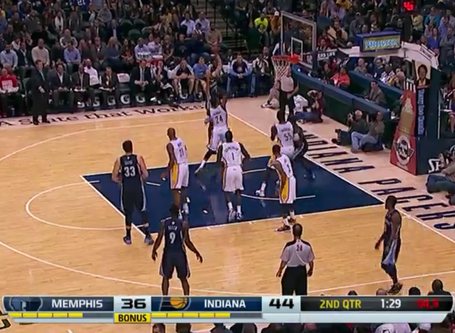 Tayshaun dribbles into the paint and to the left of George, then opens to his left, George's right, and utilizes his length for a lefty hook shot and a made field goal. These attempts are highly efficient, giving Tayshaun more of a likelihood to get to the foul line and also forcing wings to defend in the post, something they are not as used to doing consistently.

Speaking of getting more free throw opportunities, another great way to do that is by attacking the basket on dribble penetration. This series of screen shots is from the Houston game. 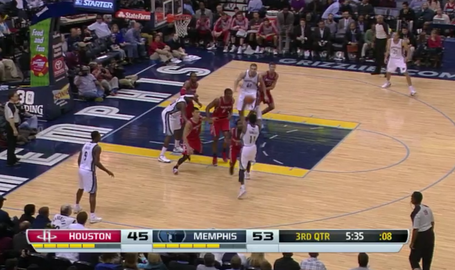 Mike Conley drives left and Houston overloads on the drive. Notice how there are 3 men within 5 feet of Conley. Instead of passing to Tony Allen, Conley will kick the ball over to Tayshaun Prince weak side, who is open after his man, Chandler Parsons, overhelps and collapses into the paint on Kosta Koufos. 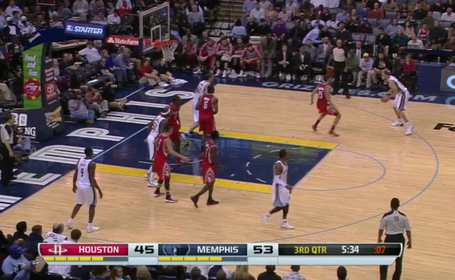 Tayshaun starts with the ball in the "triple threat" position; he can drive, shoot or pass from that spot. He recognizes the off-balance Parsons trying to get back on him and decides to drive to the left as Parson's momentum takes him to Prince's right. The middle of the top part of the paint is wide open. 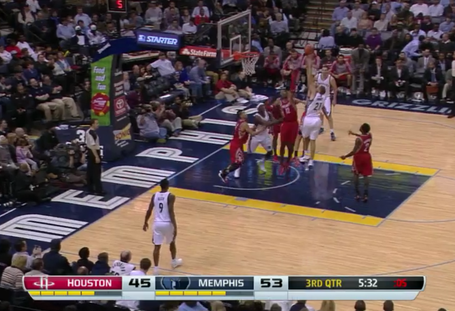 Prince knows that both Dwight Howard and Terrence Jones are on the block guarding Kosta Koufos and Zach Randolph. Therefore, an easy lay-in will not be easily achieved. Instead, Tayshaun once again uses his length and raises up with a jumping running hook that kisses the front of the rim, rolls around and eventually in.

Tayshaun's length and experience is extremely valuable. As he gets more comfortable and back in shape after his preseason issues, he will be able to get to the rim in selective situations where even younger players cannot recover with their own momentum being used against them.

Tayshaun has a great ability to find others on the court and set them up to be in the best position possible with the ball. He takes pride in this skill. In multiple interviews he has talked about wanting to learn and know where his teammates most like the ball. Prince as a ball handler and distributor of the basketball should be utilized more, both from the elbow where Marc Gasol usually roams and as the primary creator for others on given sets. Take this series of shots for example, once again from the Rockets game. 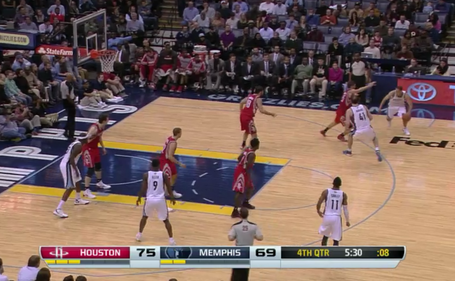 Koufos comes up and sets a pick for Prince. Koufos' man, Omri Casspi, hangs back while Chandler Parsons electes to try to fight over the pick. Parsons loses Prince and Tay drive the middle, as he did before in the previously broken down play. 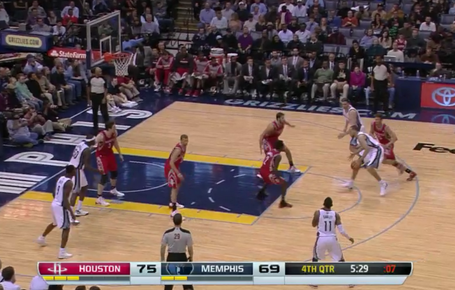 Patrick Beverly collapses into the paint at the free throw line, not wanting Tayshaun to be able to drive the lane freely, especially against this Houston small ball lineup where only Omer Asik, who has his hands full with Zach Randolph, is the true big. He abandons Mike Conley on the three point line, however, and once Tayshaun identifies the guard in the lane and sees an open Conley in his peripheral vision. 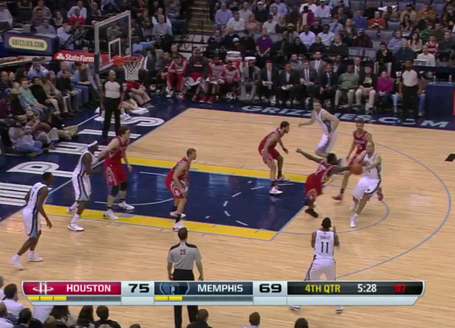 Beverly attempts to tip the pass, recognizing that he likely will not be able to get back on Conley and trying to force a turnover. He is a half second late, however, and Prince hits Conley with the pass for the open three point conversion.

Prince can do this for any perimeter wing off of the pick and roll, but he also could hit the roll man whether it be Koufos or Ed Davis as they crash to the basket, a shooter in the corner or if a big creeps up to cut him off, he can bounce it in the lane to Zach. Tayshaun's basketball IQ is invaluable; his ability to let Conley play off the ball creates another legitimate offensive option on a team that needs one in the worst way.

Prince can create for himself and for others as long as he plays within his skill set and the system.

Tayshaun Prince has been criticized a good bit. Many have called for a trade in which an upgrade at the starting small forward spot could be achieved, including this writer. With the injury to Marc Gasol, trades are basically off the table for the time being and it is time for the roster as currently constructed to step up. In this particular situation, it pays to have a former NBA champion and an Olympic Gold Medalist who can use previous experience and his physical gift of length to create better opportunities at more efficient scoring chances for himself in the post and on the dribble drive as well as for others.

In times of difficulty, you lean on those who have been there before to lead the way. Tayshaun Prince will more than likely be up to the task.