The Grizzlies are not really sure what they're doing early on this season, but they picked up a much-needed win against the Celtics back in the Grindhouse.

Memphis picked up the win against the Boston Celtics Monday night, but as with everything the Grizzlies do, it wasn't pretty. They trailed the current worst team in the league for much of the night and often seemed out of sync on both ends of the floor. That's not promising, but a win is. There is certainly going to be growing pains with this team, and the fan base just needs to ride it out until Head Coach David Joerger fully gets his footing under him.

Joerger continues to use a starting lineup of Mike Conley, Tony Allen, Tayshaun Prince, Zach Randolph, and Marc Gasol, and it is a head scratcher why he continues to stick with his guns even though teams have proven they can stop that lineup easily by clogging the paint. The Spurs created the blueprint last year in the Western Conference Finals, and now every team is going to copy it. Joerger has to expect that and adjust accordingly. Of course, the main issue with that lineup is Prince and Allen together. Neither one of them are much of a threat to score from deep, and it creates spacing issues galore. Z-Bo and Gasol can't go to work down low if they don't even have enough space to even receive a post entry pass. The post game is the Grizzlies bread and butter, and they need to figure out a way to make it work smoother again. Just look how clogged up the paint is in this twitter image from SB Nation's Mike Prada below.

Somehow, Gasol and Randolph have been able to work miracles with limited space and score with high efficiency around the rim. Gasol is averaging 7.3 close touches per game (touches that originate within twelve feet of the basket), which is good enough for second most in the league. Randolph is averaging 5.3. On top of that, Gasol is averaging a whopping 16 elbow touches a game, the most in the NBA. That's how the Grizzlies offense should be operating; through Gasol at the elbow and in the post.

There have been a lot of Joerger haters out there early on, but the stats don't lie. He knows what he's doing. He clearly has an excellent feel for his roster. Now he just has to work on squeezing the absolute most out of his players on a nightly basis. Take a look at Gasol and Randolph's shot charts below. Both of them are finishing above the league average at the rim, and for all the flack Randolph's been catching, he's really played well for the most part, at least offensively. He's averaging 13.5 PPG and 9.5 RPG through four games. It's hard to complain about a near double-double every night. Sure he's turning the ball over at an alarmingly high rate (3.0 per game), but that's a very concrete, fixable problem. 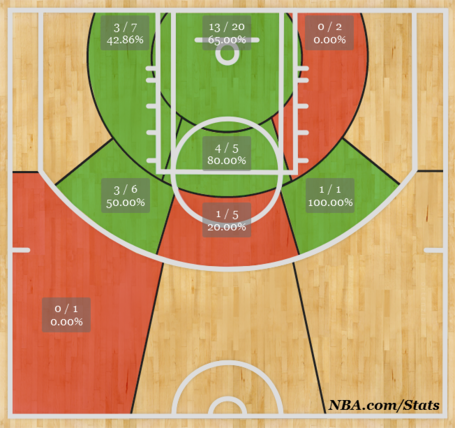 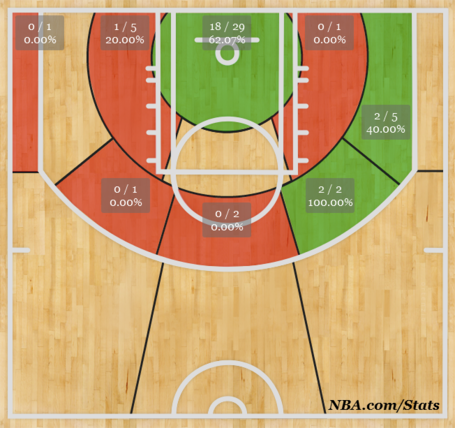 It could be argued that most of the early offensive woes the Grizzlies have experience are not a coaching problem. It's been an execution problem. The Grizzlies are averaging 17.8 turnovers per game, and most of those can be attributed to lackadaisical ball security and poor passing decisions. They finished with 19 turnovers against Boston. Joerger has already harped on the turnover issues, making it known that he is clearly aware of them. With that said, he can talk about it until he is blue in the face, but if the Grizzlies don't execute, they will continue to turn the ball over at a high rate.

The most positive thing from tonight's game might have been Jerryd Bayless' patented hot streak in the fourth quarter. He put the team on his back and played a huge part in the Grizzlies salvaging the win. However, there's probably a direct correlation as to how many times Jerryd Bayless saves this team and how bad they are playing. Bayless being forced to save the Grizzlies is not a recipe for success. He certainly deserves praise for his fourth quarter performance though. Bayless scored all 15 of his points in the fourth quarter on 6-7 shooting from the field.

On the defensive side of the ball, issues are still blatantly visible.

Also of note is the fact that Jon Leuer played meaningful minutes tonight, and it's hard to figure out why Joerger has taken so long to give him the opportunity after a strong preseason showing. He played nearly as much as fellow backup power forward Ed Davis, and after weighing both of their performances from tonight's game, there is no reason Leuer shouldn't take some of Davis' minutes next game. He just brings so much energy to the floor, and unlike Davis who's skill set is pretty limited, Leuer is a jack of all trades. That versatility is really helpful to a second unit that has oftentimes struggled to find its groove early in the season. (I wrote an article over the summer about how Leuer could help this team, and he is doing exactly that.)

On the defensive side of the ball, issues are still blatantly visible. The Grizzlies perimeter players still cheat off their man unnecessarily if he's on the weak side of the court, and it often leads to a wide open three for the other team. However, that's something that fans should just get used to. The Grizzlies have largely been a gambling defense for a couple of years now, and part of their bread and butter on that end is loading the strong side of the court. This tactic works out in their favor most of the time, but that doesn't make the five or six times a game they give up a wide open perimeter shot for no reason any less annoying. Also, the Grizzlies rotations seemed better. There were breakdowns, but they occurred far less often and dribble penetration was not as much of an issue.

It's difficult to tell how much, if at all, the Grizzlies defense has improved since the game against the Mavericks. After all, they were playing the worst team in the league, and this Boston team doesn't really have anybody other than Jeff Green that is likely to fill it up on a nightly basis.

The Celtics didn't make it easy for the Grizzlies, especially Jared Sullinger. He came off the bench tonight and apparently decided he was going to become a three point shooter, hitting two of the three he took. He finished with 16 points. Jeff Green playing in a guard's role proved to be a mismatch for the Grizzlies, and he went for twenty-two. Another interesting thing to watch was Jordan Crawford running the point when Avery Bradley was out. Crawford getting more minutes at the point is a nightmare waiting to happen, but a case could be made that Crawford has actually done a better job of running the point early in the season. He led the team with four assists tonight and added twelve points himself.

Although the Celtics fought valiantly, the Grizzlies were just too sharp in the fourth quarter to let such a bad team squeak out a win in the Forum. A much stiffer test awaits against the New Orleans Pelicans on Wednesday night back in the Forum.

Grizzlies vs Celtics: Monday, Monday, Be Good To Me