A few observations from the first full week of Grizzlies basketball.

It's safe to say that the Grizzlies were a loss to the Boston Celtics away from the fan base erupting into pandemonium. There has been a lot of good and bad seen throughout the first four games, but I'll highlight some of the more important things that could be trends on how the season pans out.

In no way possible am I knocking Pondexter's development as a player. Compared to last season he has improved as a player, adjusting to the defenses opponents will throw at him. His off-the-dribble game has improved ten-fold and there have been some moments where Quincy's passing abilities have been put to good use in the pick-and-roll. But his decision-making paired with his new found skills has lessened his value on the floor. I'll let the image show you what I mean by that: 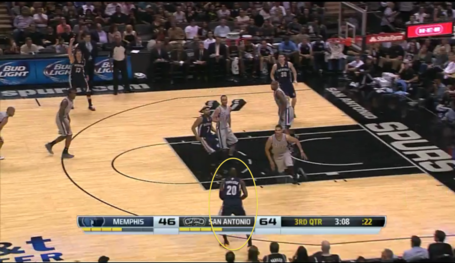 This is a situation where Pondexter shoots last season. After shooting 40 percent from three last season, this look is encouraged to be taken every time. Instead of sticking to what made him a key player within the offense, he overthinks the situation, attempting to create something off-the-dribble. Instead a turnover is committed. The same thing occurs here. 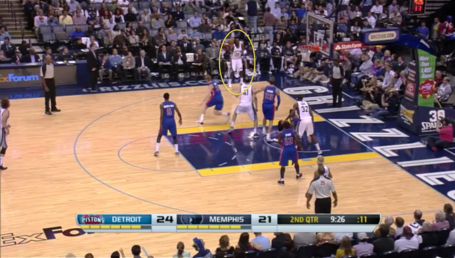 A wide open corner-3 (45.6% from the corner last season) which he refuses to shoot, instead driving into the teeth of the Pistons defense causing another turnover. These aren't plays Pondexter made last season.

Here it is again versus the Mavericks: 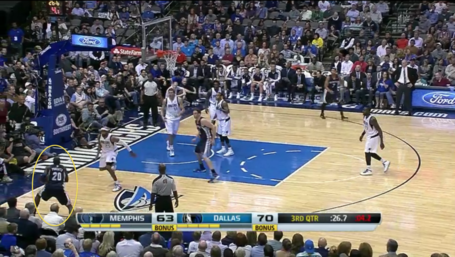 You guessed it. Another turnover. In last night's win against the Boston Celtics, Pondexter shot 2-of-3 from the three-point line, getting his shots up in rhythm instead of creating off the dribble. It's what should be encouraged by the coaching staff and from himself. The summer improvements will show over time, but he's got to remember what he's out there for which is to spread the floor and punish the defense when they leave him open.

Let's take a moment to be honest with ourselves. If Ed Davis was a free agent signing from this past summer rather than the heir apparent to Zach Randolph would he be receiving minutes based on his play of late? You know the quote "hard work beats talent when talent doesn't work hard"? That's what's happening with Leuer vs. Davis. On a pure talent level, Jon Leuer doesn't hold a candle to Davis. Ed's taller, faster, a better rebounder and an underrated shot blocker. At best, Leuer is a poor-man's Matt Bonner.

But guess what? That hasn't mattered this season. Despite his athleticism and potential, Leuer's been the better player and the numbers reflect that.

Even without the use of advanced analytics, there's a clear difference in Memphis' play when Leuer is on the floor instead of Davis. Leuer brings an energy that Davis hasn't replicated in his best day in Memphis and considering how lifeless the marquee players on this roster have looked at times, that's needed. It also helps that Leuer's best attribute, shooting the jumper, provides the offense with the floor-spacing it desperately needs.

It will be interesting if Ed Davis' ceiling keeps him on the floor rather than Leuer's play thrusting him into the rotation.

This one is strictly by the numbers though the eye test confirms most of what will be said/has been seen(stats via NBA.com).

Jerryd Bayless opting into his player option has secretly been the best offseason move from the Grizzlies with the Kosta Koufos acquiring coming into a close second. Simply put, when Bayless is on the floor good things have happened on both sides of the floor and without him these team would be 0-4 on the season.. Jerryd provides a luxury that no one other than Conley can provide: creating off the dribble. Look at how the offensive numbers increase when Bayless is on the floor (via NBAWowy):

If Memphis is going to go through the motions on defense, then it makes sense to play Bayless more as they'll have to outscore opponents.

Kosta Koufos was brought in to spare Marc Gasol from playing an absurd amount of minutes throughout the season. After watching his play, Joerger needs to change the rotation down low and make Koufos the third big off the bench instead of Ed Davis. He's better on both ends of the floor and can help a second-unit defend better. Koufos' 15 minutes per game should take a healthy jump to 18-20 to put his abilities to the best use.

Here is a piece of data that will send the "Leuer over Davis" crowd into a frenzy (and rightfully so).

There are two lineups that should cease to exist or be used less from this point on: the starting lineup (mainly the Tony Allen-Tayshaun Prince duo) and the all-reserves lineups Jeorger loves to trot out at the end of the first quarters and beginning of seconds.

Unlike the all-reserve lineup, the traditional starting lineup is defending at a level that Grizzlies fans are accustomed to, posting a defensive rating of 94.5. The problem is that neither of these lineups can produce points which leads to the Grizzlies fighting back from deficits early into the game.

The starting lineup can't operate to it's best abilities because the league has picked up on the San Antonio strategy that limits the bigs effectiveness on the block and in thehigh-low by playing off of Prince-Allen and crowding Gasol-Randolph . Prince has been solid this season and Allen has outplayed the normal set of standards attached to him, but this can't co-exist anymore. 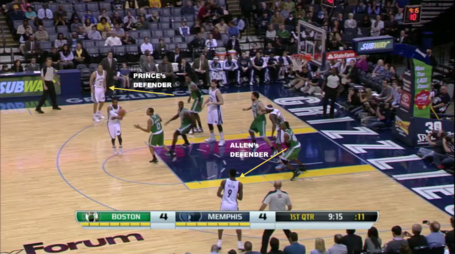 This is the perfect possession for any team playing Memphis. Not only is the paint packed to the point where neither Z-Bo or Gasol can comfortably receive the ball to make a move, Conley can't get to the basket due to the closed lanes. The end result of this play is a wide-open three by Tony Allen. No shocker here when I say that he missed. For the defense they couldn't have played this possession any better and it's the perfect depiction of why Allen-Prince hurts this team far more than it helps.

The only way to solve this issue is to change the starting lineup, something Joerger has yet to hint at on the season (Grantland's Zach Lowe thinks Prince's days in the lineup are coming to an end).

As for the all-reserves lineup, it's unclear why this group can't score, posting a worst offensive rating (73.0) than the starting group (85.3). The culprits may be Ed Davis, Quincy Pondexter and Mike Miller. Most lineups featuring two of the three mentioned players have performed poorly on offense and the Pondexter/Miller pairing has been a defensive nightmare.

With the depth on the team, there is no reason to have all five reserves on the floor at once. Four reserves and a starter (Conley, Randolph, Gasol) will help keep things on an even keel.

Whether you like it or not advanced analytics are the new wave in basketball. While we've become accustomed to sites such as Basketball-Reference, HoopData, NBAWowy and others, the NBA's release of SportVU to the public has opened the doors to information we've yet to have our hands on to help us better understand the game. Here are some nuggets from SportVu pertaining to the Grizzlies first season: