Grizzlies outplayed by the Pelicans, 99-84

Share All sharing options for: Grizzlies outplayed by the Pelicans, 99-84

The new look New Orleans Pelicans came into this one seeking their second win in as many road games.  The Hornets/Pelicans franchise has historically given the Grizzlies trouble, so there was a sense this game was an uphill battle.  Yet there was still hope that this would be the turnaround game for Dave Joerger's fast-paced offense.

Unfortunately, things did not roll the way the Grizzlies wanted.  Continuing in the formula of this season thus far, the Grizz were outplayed and straight-beaten in the first quarter.  Anthony Davis made Marc Gasol look like the second-year NBA player and not himself.  In response, Joerger ran a two-minute trial run of the Jon Leuer vs. Anthony Davis.  One can only imagine how that ended.

At one point, the Pelicans claimed 80% shooting and a 19-4 run.  With 3:18 left in the first quarter, the Grizzlies were already down by 12 points and faced another first-quarter early deficit.  The turnover woes continued as well:  at the end of the first, they had given up 14 points on eight turnovers.

The second quarter showed minor improvement.  Defense picked up inside and Pelicans' hot hands calmed down a bit, going 5 of 17 in the quarter.  With 4.8 seconds left in the first half, the Grizzlies ran a scheme that put Mike Conley right through the center lane for a pretty layup.

This was my first game when I truly was able to watch Davis play possession to possession - boy, was I impressed.

I dare say that was one of the finer moments of the game.  Heading into halftime, the bears were only down 51-41.

In one of the stranger moments of the game with about 6:30 left in the quarter, Zach Randolph had to go to the hospital in anticipation of his fiancee's giving birth.   One of the most unique images you'll see in your personal NBA excursions: 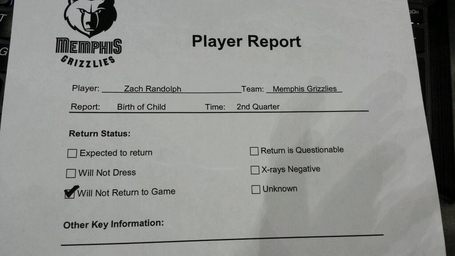 With him out of the center lane, Anthony Davis looked even more like the monster he is.  This was my first game when I truly was able to watch Davis play possession to possession - boy, was I impressed.

Ed Davis begun the second half, yet was not of much help.  Turnovers continued to be the woes for the Grizzlies here; entry passes looked incredibly lazy and offense appeared to be in shambles.  The Pelicans grabbed their largest lead of the night, 67-48.  Grizzlies were -7 on the glass with a total of 8 offensive turnovers.

At this point I grudgingly left the GameThread of beloved GBB readers and began to write this recap.  A couple paragraphs into the recap, however, I turned and took a look at the score - the Grizzlies were making a comeback!  I deleted the paragraphs I had written and jumped back to the game.  Jamaal Franklin (yes, Jamaal) channeled his inner Tony-Allen and found himself scruffin' for balls down low for easy offensive putups.  Mike Miller channeled his Miami Heatness and knocked down the spot-up 3-point shots.  Many of us in the thread thought we had a comeback on our hands!

The Grindhouse was quickly silenced, though, when Eric Gordon knocked down jumpers on back to back possessions and left Mike Miller rolling around on the floor.  Mike Conley snagged an elbow in the face and had to leave the game early - almost 30 seconds after Jerryd Bayless left the game due to an ankle sprain.

Our very own Nick Calathes ran point the rest of the way and carried the comeback with Ed Davis for a couple more minutes, but the Pels were able to hold us down and keep us from grabbing air above the surface.

The Grizzlies were outplayed and outscored in the first quarter, 33-18.  That's a 15 point deficit.  The final score of the game?  99-84.  A 15 point deficit. A team in any sport faces incredible difficulty when they give up the substantial early lead.  In our defense, the Pelicans shot well over 70%  in the first quarter - seemingly everything was going in - but the success got to the Grizzlies head, and they never truly seemed to be in control until the game was already decided.  Not saying a comeback isn't possible - but the feat becomes that much harder.  And if we can't get it down against New Orleans, the youngest, most inexperienced team in basketball, we can't get it done against the heavy hitters.

I'm not the first to bring up the turnover issue this season, but the statistics are glaring - New Orleans forced 18 turnovers throughout the game.  The Grizzlies committed eight turnovers in the first 12 minutes.

The franchise that has so famously established its reputation on forcing turnovers is being out-turnovered.  The Flash is just another guy without super speed.  The Hulk is merely a scientist without super-strength green scariness. 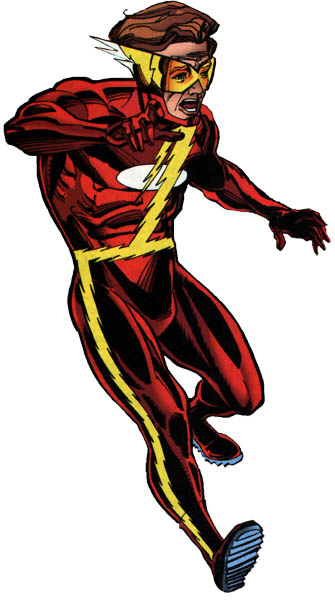 This is more than an issue of basketball - this is an issue of team identity.  Something's happening there on the court that needs to be ironed out.

If there's a way to commit Pera-ollinger blasphemy, it's to mention something that I see happening off the court, beneath the numbers.  The veterans simply aren't showing up.  Tayshaun Prince - who is somehow part of the starting five - looks unmotivated and sluggish (two turnovers).  The most energy I saw from Marc Gasol all night was when he smashed the scorecard table before a timeout (three turnovers).  Zach Randolph had two turnovers in almost 8 minutes of play.

Roles are confused.  The only exception here is Mike Conley's 26 points - but even then, he only finished with one assist.  Mike Miller led the team in rebounds; Marc Gasol only had one of his own. I can't tell you exactly what that says about this team, but it says something.

The Grizzlies move to 2-3 on the season, 0-3 against the Western Conference, and 0-3 against the division.  For comparison, the team finished 10-6 against the division all of last season.  This Saturday night, Golden State comes to Memphis, and we get to see big studs like Stephen Curry and Andre Iguodala.  If we play against them like we played tonight, things can escalate to a level of ugly many of us don't want to see.