Keith and Matt talk about Ed Davis, his development, and Keith hands out marriage advice to the young'uns out there.

Share All sharing options for: What to make of Ed Davis: A good ol' Grizzly Bear Blues e-mail discussion

Matt: Keith, you sounded off about Ed Davis in the GBB email chain, saying we traded Rudy Gay for another Rudy Gay, a player that lives off potential and hype (paraphrasing). I'm here to help buddy. Take a seat on my couch, and think of this as your own personal Ed therapy session. How does Ed Davis make you feel?

Keith: Are you looking for one word? I'm terrible at those. I always end up saying "Prob---wait!" And then I've wasted my one word. If I had to pick one, I'd say "frustrated." Ed Davis refers to himself a "Boss" (can we make him put a dollar in the douche jar for that?), but he hasn't done anything in the NBA to merit it. His PER numbers were decent on a terrible Raptors team, but as a Grizzly, it has been much closer to custodian than boss. I see the athleticism, but I don't see a high basketball IQ or improvements on the court, and that's incredibly frustrating from a guy who we were all hoping would alleviate us from Zach Randolph's contract should the big fella's skills decline farther and faster than we would all like.

Matt: I'm frustrated too, but I think it's important to put that frustration in context. Davis barely played last year, but when he did, I was generally pleased with what I saw. The coach (RIP Lionel Hollins) preferred playing the clearly-less-productive Darrel Arthur. Davis went from being a starter to the 4th big. He struggles to pass, dribble and shoot jumpers, and your comment about basketball IQ is spot on. The good news is the Grizz don't really need him to pass, dribble, and they definitely don't need him taking shots outside of the paint. The bad news is that we really need him to grow more comfortable and become more intuitive. I guess my question for you is: do you have the patience to see that process out, and if so, how long?

Keith: If you're asking me if I'd trade Ed Davis tomorrow, probably not. But I wouldn't offer him an extension either. I think the front office owes it to the fans and itself to see if Ed can show any signs of being our starting power forward. Where's the game tape you were pleased with? I can't remember anytime I saw Ed Davis on the floor last year when I was happy with what he was doing. And I get it, he was under a lot of pressure knowing Lionel was scrutinizing his every move. He was benched for even the tiniest slip up, but I don't think that's a legitimate excuse for constantly trying to dribble into the paint and fail to outmuscle people.

I can't remember anytime I saw Ed Davis on the floor last year when I was happy with what he was doing. -Keith

But let's wipe the slate clean from last year. Let's judge him simply on the preseason and going forward to determine whether or not we try to trade Zach and extend Ed Davis in the offseason. If I'm the GM, I make up my mind by March. That gives Ed more than half the season to prove what he's got and if he can grow and learn and add muscle and shoot a higher percentage from the line and stop dribbling in the paint and fit into the system better.

Matt: Well, Ed blocked over seven percent of opponents' shots while on the court with the Grizzlies - a rate that was equaled only by Serge Ibaka and Javale McGee last year. He captured over 12% of offensive rebounds for MEM last year, and since he's come in the league he's gotten between 10% - 14% (10.3 total rebounds per 36 mins). Those are pretty good levels, and (though the block rate was a jump over previous years) at this point this is what Ed Davis does. He rebounds, block shots, and shoots over 51% whether he plays 15 mpg (with MEM) or 24 mpg (some other years). Is that enough for you to want to keep him here? Or do you want more?

Keith: What was his goaltending percentage though? We keep saying commitment here, but what's an actual number you'd sign him too. If Ed signed tomorrow for 4 years, $6mm, then of course that's a great contract. But if it's something like four years, $25 million and up, then I'm going to be very uneasy.

That's a gamble the Grizzlies can't afford to make. If you were in a bad relationship, and the girl said, "If you marry me, everything will get better!" You wouldn't rush out and buy a three carat ring. (Free advice on the house, kids.)
To answer your final question: yes, I want more. Was Zach Randolph overpaid? Absolutely. By a vast margin. But ZBo had - and still has - the ability to take over a team, and a franchise, and a city, for long stretches. He can put the team on his back and lead them to long winning streaks. I don't see that in Ed. I don't see Greg Poppovich ever having to commit multiple defenders because he's worried Ed Davis is going to beat them.
Zach is also marketable. He and Tony get credit for starting the "Grit and Grind" movement, but theycoined ALL our phrases. "We Don't Bluff" came directly from him. I can't see the city of Memphis wearing tight black t-shirts with the words "Like A Boss" in white across them, and if that day ever comes, I'm calling for a dollar in the douche jar from everyone. I don't want Ed to be ZBo, but I want him to be more than what he is.

Matt: I guess that's where we differ. I think it's unreasonable to expect Ed to be ZBo. And sometimes you do need to "bet on the come" with a contract. The Jazz just did it with Derrick Favors. The Grizz did it once upon a time with Mike Conley. Sometimes it doesn't work out; sometimes it does. But here's the thing: Ed Davis has value. He rebounds, blocks shots and shoots a high %. What is that worth? Well, not as much as Derrick Favors, but certainly more than 4 years 1.5mm. Somebody will pay Ed $6mm-$7mm/year in the open market, assuming his production remains the same. That's not overpaying. That's fair market value.

Part of the issue is the skewed version of fair market value that we have in Memphis. Kosta Koufos is worth two to two and a half times the $3mm he gets paid every year. Ditto with Jon Leuer.

Keith: I don't expect him to be ZBo, but he has to be more than what he is now. Derrick Favors and Mike Conley showed flashes they could be much more than what they were. The difference between betting on Mike and betting on Ed is basketball IQ and Skill. Mike was raw, but he was quick, and was very knowledgeable. Ed has the athleticism, but I don't see the high basketball IQ.

We're in full agreement on the latter part of your argument though. Leuer is showing he's worth much more than what he's making, and I didn't believe Kosta Koufus' contract when that trade was first completed.
Here's the issue: we don't expect Jon Leuer to realisticly be a starter on a playoff team. The expectation for Ed Davis, if he is re-signed, is to become the starting power forward on a championship caliber team. Is $7-8 million a year worth it for Ed Davis to start on this team, or would we be better served using that money to fill needs in other ways? 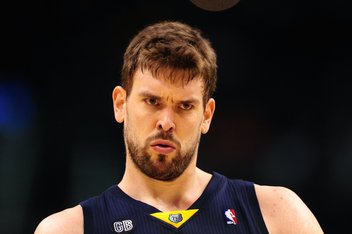 What to make of the Grizzlies first week.

Matt: Whether he is worth it on this specific team is really the issue. Not only is Ed competing against fan expectations, but he's competing for minutes. Basketball IQ is only acquired with minutes, and unfortunately, his less-than-intuitive brand of basketball is what inhibits him from getting on the court.

With that said, I dont attribute this to laziness or unwillingness. Players like Gasol and Conley - guys that really see the game at a young age - are rare. Some - Iverson, Tracy McGrady, Dominique - never quite match the mental game with their physical gifts. Others - Paul George right now, for instance - grow into it. I dont think it's a sign of laziness, or selfishness when it doesn't happen. It's a skill to process information that quickly. It can be acquired through repetition, but some will just never quite get it.

I'll leave you with this. While it may not be the best path for the Grizz to pay what I consider to be fair market value (and really, WTH do I know) for a 23 yr old elite rebounding, high shooting, pretty good shot blocking power forward, someone will. Even if Ed doesn't ever understand pick and roll offense/defense, a 3 year $21mm deal would not kill the Grizz. He becomes an expiring in year 3, and while they don't have as much value as they used to, medium-sized expirings can be effective trade chips. I'll give you the final word.

Keith: Just because someone will doesn't mean we should. That's my least favorite argument. If we were to go bar hopping and you pointed out a large woman with an unfortunate series of moles and said to me, "Hey Keith, if you don't take her home, eventually somebody will." That doesn't do anything to entice me to go home with her.

Ed Davis is still young, and he has time to grow and develop and add muscle. Will he ever do that? It's difficult to say, because despite the amount of time he has to accomplish these things, we haven't really seen much physical evidence that these things are in the works. $7 million a year for three years isn't too much for a starting power forward in this league, but does having Ed Davis as the starting power forward for the Memphis Grizzlies make them a championship caliber team? At this point, that answer is no.