The Grizzlies rough start in November could be a mirage

Enough with all the negativity and short term memory. Anyone can stand on a soap box and scream to the heavens, blaming the sky for the rain. The NBA season is a long one, which can mislead if you allow it to. The challenge is to not allow the newness of a campaign to overwhelm the truth; that this Grizzlies team will be different a month from now. And this season, different than last, means they will likely get better. Here's why.

Share All sharing options for: The Grizzlies rough start in November could be a mirage

Some actual quotes I have read/heard in the past 24 hours:

"Lionel Hollins should still be the head coach; Joerger has zero control of what is happening."

Here is my favorite, tweeted out by the Memphis Flyer's Kevin Lipe:

"I love the Grizzlies and am absolutely sick of what they have become and of what the FO is doing to our city." ~ CA comment.

There is overreaction, and then there is this, which is a few notches above. All it takes is two preseason games and five struggling regular season games to break some within the "Believe Memphis" crowd? Literally less than 1/15th of the season is time to panic? That belief is only applicable if things are going well?

Were these folks the same ones screaming and yelling with utter ecstasy last November, when the team shot off to an amazing 12-1 month only to snap back to realty in December (7-7) and January (10-7)? How soon we forget how misleading early season performance can be when viewed through the lens of an entire season.

Short term memory has become an extremely prevalent part of our society, it seems. The mirage of a hot November gave way to the reality that was an overpaid and under-performing team that needed a change. So who is to say that this November is not a mirage, just like the last one was? This team lost three straight games last season by 20 or more points and still made the Western Conference Finals. Seasons have high and lows; this one is just starting on a low.

Why are five games so damning to some? While performances have been poor, early season successes and failures can be misleading.

Why can't these Grizzlies recover their defensive swagger, save possessions from turnovers and reopen the paint? How come this 5 game stretch is so damning when in the past season we saw the opposite be the case, the highest of heights being unsustainable, leading to one of the biggest trades in team history?

It doesn't have to be this way. Rational, level-headed minds can take a deep breath and find ways to rectify the situation. The first step is, acknowledging that some things have occurred that are out of the Grizzlies' control. Exhibit A, this tweet from our very own Kevin Yeung about the Pelicans game:

So, the Pelicans made 56.7% of their midrange jumpers yesterday.

That is a little more than 16% over the league average. The law of averages dictates that teams will not shoot this well from midrange if that is what the Grizzlies decide to allow instead of the far more efficient corner 3 or drive to the paint. There are other areas that the Grizzlies opponents are shooting obscenely well in; 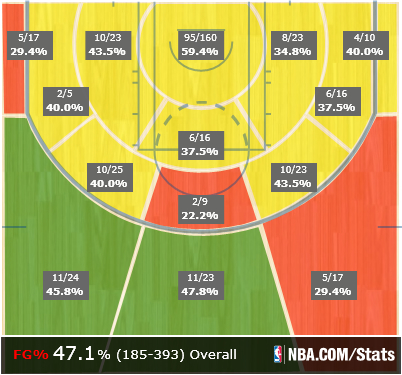 You pick and choose as a defense what you will give the offense, and teams will not hit those outside the corner 3 point shots or finish in the paint as well as they have against the Grizzlies thus far this season. It will even out.

And part of that process is not giving as many opportunities to the opposing team. Turnovers have been discussed a good bit, but an idea for ending a specific type of turnover would be more off-ball screens between bigs, making entry passes a bit easier. Marc can set an opposite low-post screen for Zach, enabling him to get more space in the paint to work with.

Utilizing low-post screens and more high-low sets will create more opportunities that can get bigs open in the post without a wing having to feed the block.

More high-low sets could also be initiated; an underrated aspect of Ed Davis' and Jon Leuer's respective games is their passing ability. When Ed or Marc is in, allow for them to set up at the top of the paint and give Zach or Kosta Koufos an opportunity to use their size and strength to get deeper into the lane and get easier baskets or free throw opportunities. The bigs need to do a better job of playing off of each other and helping out the wings, who have struggled with entry passes thus far.

Defensively, it comes down to effort and positioning. Help defense is a half second too late in rotation, there is poor foot movement and anticipation is off, a possible manifestation of a lack of focus. Here is series of screen shots showing a great example of this from the 3rd quarter of the Pelican's game. 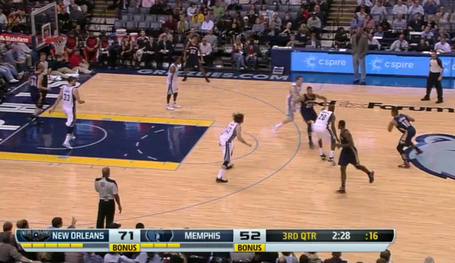 Standard pick and roll at the top of the key involving Eric Gordon and Anthony Davis. Quincy Pondexter is going to try to get over the pick, while Jon Leuer attempts to hedge off Gordon from getting wide over the top of Davis.

As Q gets over the pick, he loses positioning, getting too close to Leuer on the hedge. Gordon is going to be driving to the basket; there is no reason for Q to go to where Gordon is at that moment, he needs to position himself to where he will be at an angle. Cutting off Gordon with better initial positioning post-pick and better defensive spacing would limit penetration. 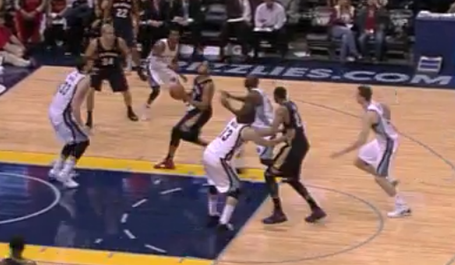 As Quincy gets into recovery mode, Marc Gasol stands in the paint awaiting the Gordon drive. Marc tries to play a spot more than a man; if he comes up too far on Gordon, he could theoretically dish to Greg Stiemsma for an easy jam. However, Gasol is in a good place to retreat back in to Stiemsma if necessary, so he could probably be further up in help against Gordon. Because of being indecisive, Marc does not see the running floater until it is too late and is a half-second late in defending it. Gordon hits the floater for another basket that was created from poor positioning and late help defense.

The November haze can be hard to see through, especially with such adversity already upon the team. Memphis has appeared lackadaisical at best, and players that the Grizzlies are counting on, such as Marc Gasol and Quincy Pondexter, have struggled across the board.

November's past have shown that you are never as good, or as bad, as you may think initially. Adjustments are necessary, and will be made.

But the ghosts of Novembers past have lessons to teach us; that the highest of highs are not really that high, and the depths of despair are never as low as you think they are. Coach Joerger and company will make the necessary adjustments and will drive home the point that minutes are earned, you are entitled to nothing. Playing within the scheme and with energy all while gritting through adversity will dictate how the next few weeks play out for Memphis.

Seventy-seven games to go. This too shall pass. Grind Forth and Believe.