In an outcome that most Grizzlies fans' should have seen coming a mile away, the short-handed Grizzlies fell to the shorter-handed Nets 97-88 at home Saturday night.

Sadly, I cannot. With the Nets stumbling in fresh off a coaching fiasco and a humiliating defeat at the hands of Houston, and with half their roster not even in the building, I knew all too well what the outcome of this game would be, yet that still doesn't wash the taste of pathetic out of my mouth after this debacle of a game.

The Brooklyn Nets laid waste to the Grizzlies 97-88, on the backs of three players. Andray Blatche (21), Joe Johnson (26), and Brook Lopez (20) scored 67 of the teams 97points, and Memphis had no answer for any of them all night.

Things started off ugly enough with Memphis needing a solid three minutes to score it's first bucket of the night. After the first 4 minutes of game play, the two teams were shooting a combined 37% from the floor, and it looked like this was going to be an ugly, grind it out affair.

No one told Joe Johnson this.

The Arkansas native, already with four points in the opening frame, erupted for a quick 11 over the final two minutes of the first quarter. Joe Johnson gets a lot of flack for being horrifically overpaid, for good reason, but tonight he showed flashes of the scoring ability that led the Hawks to make that deal in the first place, and on the strength of his hot hand, Memphis trailed 24-19 after one.

More: Check out Nets Daily for the Brooklyn perspective

Both teams played out a similar script in the second, as the Grizzlies would fail to break 20 while allowing one Nets' player to singlehandedly beat them. The culprit in this period was noted scoring threat Andray Blatche. The big fella scored eight of his 21 in the quarter, including going 2/2 from beyond the arc. Brooklyn was able to push the lead to 14 before the Grizzlies got five quick points to close the gap to single digits before halftime.

Coming out of the break, it looked like the Grizzlies might finally turn things around and overcome themselves and the Nets. After allowing Brooklyn to score two quick buckets, Memphis scored eight in a row to force a quick Nets' timeout.

The Grizzlies were able to score much more efficiently in the third quarter, but failed to get enough stops to overcame the large deficit they created for themselves, and despite four 3 point makes in the quarter, were only able to trim the lead by one point, trailing 73-65 heading into the fourth.

The fourth quarter saw the return of Quincy Pondexter hero ball, something Memphis fans really haven't seen since the playoffs last season. Q opened up the period on a 9-2 run, pulling the Grizzlies back to within one point of the Nets at 75-74. With 9:15 to play in the game, it certainly seemed like the Grizzlies were about to swat the gnat-like Nets and overcome the post-Thanksgiving hangover.

Unfortunately, an all too familiar refrain began to play. The all bench lineup, still in the game thanks in large part to Quincy's heroics, gave up five quick points leading to a Memphis timeout. At this point, we were all expecting Coach Dave Joerger to filter in some starters, if not bring them all back. Instead, he continued to run out all five reserves. You can argue that this was a bad decision, but with as hot as Quincy was, it made sense to keep riding him. 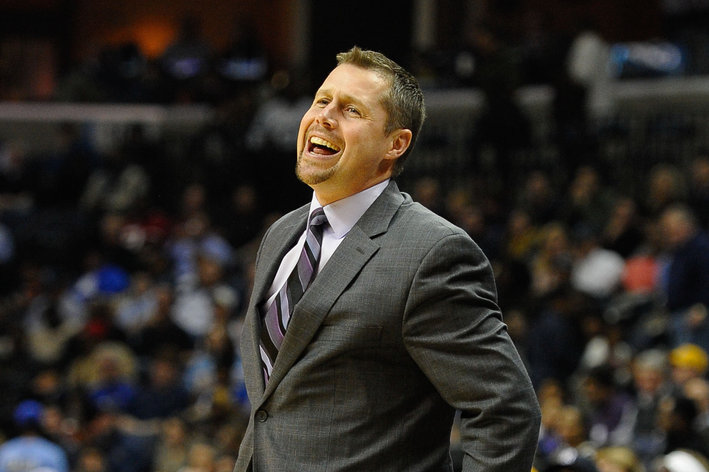 Dave Joerger continues to repeat one of the mistakes that's killing the Grizzlies this season.

Unfortunately, he wouldn't attempt another shot for another three minutes of game time, and the Grizzlies inability to get stops at all in any shape form or fashion like seriously in any capacity when they needed them allowed the Nets to regain a double-digit advantage. In the end, it was too much for the Grizzlies to overcome, and they never even threatened to get back in the game after that point.

All in all, it was a terrible performance from Memphis. The Nets may have talented players, but they have been largely lethargic and comedically bad all season, and they had no business coming into the Forum and getting a win. Even without the two All-Star bigs, the Grizzlies have enough fire power to take care of a team like Brooklyn on their home floor.

But like we've seen far too often this season, the offense stalled and the defense was non-existent (at best) when it mattered most. It's been a different drummer, same old beat story every night for the Grizzlies this season. All the wins have come on the back of heroics (vintage ZBo, Marc near triple-doubles, Conley 20+ scoring games) and all the losses have been a perfect storm of poor preparation, execution, effort, and energy.
While ZBo should return before the Grizzlies tip off their next game, Marc is still weeks away, and they're going to need to circle the wagons and will themselves to be better if they hope to do anything this season other than muddle through a .500 year.