After losing two straight, the Grizzlies were able to get back on track in the FedEx Forum against the Magic. It was a great team effort, and despite a late push by Orlando, the good guys were able to seal the victory.

After watching the Grizzlies play seemingly the same game over and over again since Marc Gasol went down, you could expect more of the same from the Grizzlies against the Magic Monday Night. Right? Wrong. The good guys came out firing and seemed determined to overcome the injury woes that have befallen them. As always though, they did not make it easy.

The first quarter opened with the rag tag starting five of Mike Conley, Jerryd Bayless, Tayshaun Prince, Zach Randolph, and Kosta Koufos. This group got things started off fast running crisp sets, all the while playing with lots of energy. For once, guys seemed to be actively communicating on defense, with Mike Miller leading the way directing traffic. Miller, coming off the bench as usual, was a huge plus for the Grizzlies.

Recenlty, Miller has looked incredibly rejuvenated for someone with so many bum body parts. He, along with many others, helped the Grizzlies record a game high 10 threes this season, and they did it while only taking 17. That's the best three-point shooting performance this Grizzlies team has displayed in what seems like years. Miller got the Grizzlies It appears as if he has taken it upon himself to get the Grizzlies through this rough patch, and Memphians will respect that grittiness.

Speaking of grittiness, Jon Leuer played an incredible game yet again. He continues to impress on a nightly basis, and he is making the most of his opportunity with others out. He finished with a double-double, 16 points and 12 rebounds.

Most people like to look at Leuer and assume he is unathletic and coin him gritty and an 'energy' guy. However, that isn't fair to him. A player with his talent doesn't deserve that label. Leuer demonstrates great athletic ability at times, and he has even shown that he can be a smooth post player; just ask Andrew Nicholson.

Leuer nailed two perfect hook shots over the young Magic big man and just ran back on defense like it was nothing. He's playing with otherworldly confidence, and it's worth noting that if this front office does decide to shake things up to create a roster more conducive to running an up-tempo offense, Leuer is probably a keeper at this point. He could be a valuable role player for this team for the foreseeable future. He's a Swiss army knife big man that can execute a multitude of things on a basketball court.

What in the?: Barry Hecker firing explained

The Grizzlies crisp ball movement and general unselfishness in the first quarter led to eight different players getting in the scoring column during the frame. The only problem for the Grizzlies during the quarter was Nicholson. His length caused mismatches for Memphis all night on both ends of the floor. He had three blocks in the first quarter, and the Grizzlies struggled to shoot over him all night. Victor Oladipo was held scoreless by Mike Conley in the first, with what was an impressive defensive effort. Orlando was held to 16 points in the quarter by the stingy Grizzlies defense.

In the second quarter, the Grizzlies picked up where they left off on both ends. Conley carried the Grizzlies offensively with 9 points in the quarter, finishing three times at the rim while adding one three. The most pleasant surprise that came during the second quarter was the awakening of Jamaal Franklin. The rookie hit his first three of the year on what was a pretty shot. Shortly thereafter, Franklin caught the ball on the baseline in the corner, immediately put the ball hard on the floor, and drove to the rack to finish with a crafty reverse layup.

Joerger continued to call crisp sets, and he had his guys zipping the ball around the perimeter creating easy looks. The more games he coaches, the more an offensive system emerges. He clearly favors various off ball screens to try to free someone for a shot quickly before moving to pick and roll late in the shot clock. It's really nice to see him finally getting his feet under him on the sideline. On the other end of the floor, the Grizzlies somehow managed to defend better in the second quarter than the first, holding the Magic to just 14 points. At halftime, the Magic had 30 points, their lowest half time total of the season.

Things changed quickly after intermission as the Grizzlies became complacent. They allowed themselves to rest on the lead they had built, and that was a recipe destined to fail. Nicholson began his reign of terror on the much slower Randolph, going for 13 points in the quarter. Randolph struggled to step out and contain Nicholson on the perimeter, and he was made to pay twice via two threes.

The porous defense in the third doesn't stop with Randolph though. Bayless was horrendous in the third, giving up a threes to Jameer Nelson and two deep twos to Oladipo all within a matter of a minute and a half. It wouldn't be right to mention Oladipo's name without mentioning the lockdown defense he played on Conley during the third quarter, holding him scoreless. He's going to be an insanely good perimeter defender for a long time in this league On the offensive end, Bayless looked to have plenty of confidence despite all his recent shooting woes. He didn't have a terrible offensive night, but most of his shots still aren't falling. The high point of the quarter was Franklin drilling a fadeaway three in the corner to beat the buzzer.

In the fourth quarter, the Grizzlies continued their slide, letting the Magic close the gap to four points. The Grizzlies offense was able to do just enough late to secure the win. First, Z-Bo bullied his way through Glen Davis to get to the rim and kiss the ball off the glass to put the Grizzlies up 7 with just over a minute to play. The final nail in the coffin came with less than thirty seconds on the clock when Orlando was doing a lot of chasing trying to force a turnover. It was handled well, and Bayless was eventually left standing wide open in the corner where he buried a three to put the Grizzlies up 9. 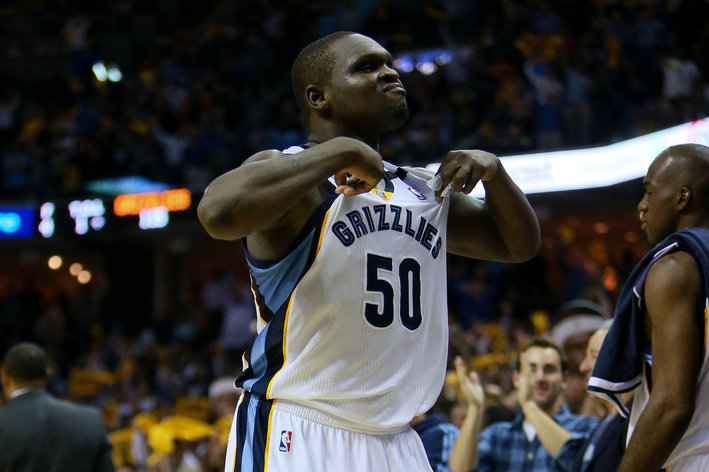 Vote for the greatest home uniform in franchise history, and look for the road and alternate uniform installations this week.

It would have been nice to see a complete performance, something the Grizzlies haven't been able to accomplish yet this season. However, with this mostly B-List lineup, the performance we received was literally the best this group could do. They fought hard all night, and their hard work paid off. It's going to be tough for the Grizzlies to perform like this night in and night out with this group, but they will certainly continue to try. On to the next one!

The next game will be on Wednesday, again at home, against the Oklahoma City Thunder. Grind forth!

Much needed win at home ! Still got a lot of work to do. Back at it tomorrow ! #GrizzNation #WeAllWeGot