The Domino Effect from the injury of Memphis Grizzlies' Quincy Pondexter

With Quincy Pondexter out for the rest of the season with a stress fracture in his foot, the Grizzlies are losing one of their primary three-point shooters. How much will this affect them in the regular season?

Share All sharing options for: The Domino Effect from the injury of Memphis Grizzlies' Quincy Pondexter

He's not exactly Marc Gasol, but Quincy Pondexter's season-ending stress fracture in his foot hurts the Grizzlies a lot. Shocking, I know. Q-Pon isn't a Defensive Player of the Year award winner, nor is he one of the few big men in the league that can direct an offense not only for themselves but for the entire team with the ball in their hands. He's not quite that good.

But with the loss of Pondexter, we're losing his primary niche, and unfortunately it's one we were already short on to begin with. His percentage is down by 7.1% this season, but Quincy Pondexter is one of alarmingly few capable three-point shooters on the roster.

The Grizzlies went out and nabbed Mike Miller this offseason, and he's been nothing short of great as a shooter off of the bench. He's hitting 2.4 threes per 36 minutes on a very strong 46.2%. Jon Leuer is emerging as a legit backup option, and while not prolific from three, he does have consistent range from downtown for a big guy (4-9 on threes this season).

On the other hand, the rest of our shooters have been off to start the season. Mike Conley, Quincy Pondexter and Jerryd Bayless are all averaging at least 1.0 made threes per 36 minutes, and we know they're capable shooters. Not one of them is scratching league average from beyond the arc right now, however.

Bayless has slumped to a 26.7% three-point percentage, while Conley is down to 32.4%. Both have generally had good looks on their threes, although perhaps they've been a bit eager to shoot triples off the dribble.

Pondexter, in spite of a broken nose that cost him a few games, is actually second behind Mike Miller in threes made per 36 minutes as he's hitting 1.5 triples on a 32.4% rate. Scarily, that percentage is tied for third with Conley on the Grizzlies after Miller and Leuer. It's disappointing to see that drop in efficiency after Pondexter made the leap to 39.5% last season, which is right there in specialist territory (even if most of Pondexter's threes came from the corner).

So yeah, there's no question losing Pondexter hurts. It brings the Grizzlies down to three proven three-point shooters (we'll discount Leuer, since he's unlikely enough to spend significant time spotting up around the arc in any given game).

This is a team already dead last in three-pointers made (4.3 per game) and three-pointers attempted (13.5) while shooting a 31.6% three-point percentage that ranks 29th. Now those guys shooting around 30% don't just have to bounce back to their typical forms, but instead they also have to make up for the loss of Pondexter.

However, what hurts most about losing Pondexter isn't the burden it places on the Grizzlies' other shooters, but instead how it affects the Grizzlies' attack into the paint. While Miller and Bayless are probably going to be the first in line to claim Pondexter's minutes, we're also likely to see more of Tayshaun Prince and Tony Allen.

It's not hard (nor is it particularly fun) to remember how easily the Spurs exploited the Grizzlies in the Conference Finals when they simply laid off of Prince and Allen to crowd Zach Randolph and Marc Gasol in the paint. The Grizzlies are a team that run their offense inside of the arc, whether through pick-and-rolls, high-low passing or post-ups. When the opponent team can take extra steps in, they can crowd and shut down pretty much everything the Grizzlies try to do.

Check out the spacing on this Conley-Gasol pick-and-roll from last season's playoffs. 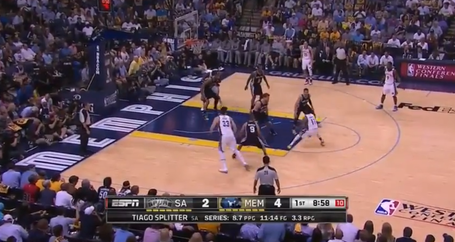 It's kind of scary, because until the real Gasol actually comes back, the Grizzlies are forced to run more P&R action between Conley and Kosta Koufos because of Koufos' lack of offensive versatility compared to Gasol. You better hope the Grizzlies have Mike Miller or Jerryd Bayless out on the perimeter when they run pick-and-rolls, because with just three shooters, this is how defenses are going to play the Grizzlies for the rest of the season.

While it doesn't account for the ripple effect losing Pondexter will have on Dave Joerger's rotations, look at how many of the Grizzlies' most-played Pondexter-less lineups feature just one of the Conley/Bayless/Miller trio. The ripple effect probably means more of Bayless at shooting guard with Nick Calathes seeing more court time, among other things, but with Conley's tendency to drive to the rim, we're still going to see a lot of situations where we might have just Bayless or Miller spotting up on the perimeter even in "two-shooter" lineups. 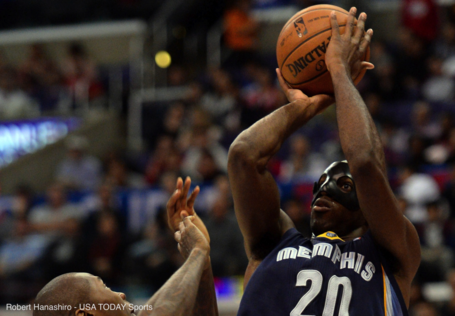 Can we trust the few shooters we have to get it done? As much as I love Miller and Conley (and hell, Bayless ain't too bad when the shots are going down), expectations can only be modest. Over the past few seasons, Conley has shot marginally above league average from three (with, for whatever reason, a declining trend in his efficiency). Bayless has been really inconsistent from season to season, but for his career he shoots a little bit below league average from three. And at the rate things are going today, defenses might as well be willing to concede threes to them too.

Sure, we can hope for Conley to put a stop to that declining trend and we can hope for Bayless to have another 2011-12 (in which he shot 42.3%, albeit in 31 games), but really, the only standout three-point shooter the Grizzlies employ is a Mike Miller likely too old to handle much more than what's already on his plate. Remember just how poorly this team fared in three-point shooting relative to the rest of the league even with Q-Pon? That makes hoping for significant improvement from here feel like a pipe dream.

Of course, the Grizzlies were fine last season even though they finished last in three-pointers made and attempted, the same as where they are this season. There are other ways to improve this struggling team other than by three-point shooting, and adding just one more shooter to alleviate stress by playing fill-in minutes could work wonders. Whether the Grizzlies want to sign one of the wings they're bringing in for a workout, like Reggie Williams or Seth Curry, or make a trade at the end of their roster, the added flexibility from having one more shooter available to plug into lineups will help.

There's also Jamaal Franklin, who made his first two threes in the NBA against the Orlando Magic on Monday. The jury's out on whether a) he can be a consistent three-point shooter and b) whether he's ready for NBA playing time, but there's plenty of intrigue in the Grizzlies' second-round rookie.

Remember just how poorly this team fared in 3-point shooting relative to the rest of the NBA even with QPon?

How will the rest of the season go? Who knows. At this point, the odds may well be stacked against the Grizzlies. They're .500 in a Western Conference where a .500 record is equivalent to .350 in the Eastern Conference (tenth in the conference). The injuries are piling up, and vibes with this team feel as low as they've been in years.

But you know, it's December 10th. Teams will regress and others will bounce back. You can look at the Grizzlies' spacing and think they're bad and getting worse. Another perspective is that they can only improve from 1.2 threes per quarter. Random variance from game to game (even from play to play) can be a funny thing, especially with three-point shooting. Just a bit of luck can turn the needle in the Grizzlies' favor and help them get back on their feet post-Pondexter.

Luck's been against the Grizzlies so far, so maybe that means they're in for a break soon? 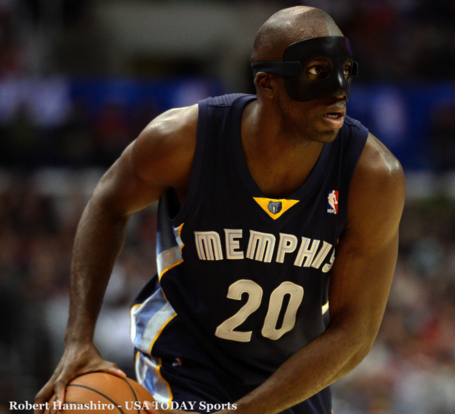