The Memphis Grizzlies are on the road once again after a somewhat disappointing home stand. They will be happy to have Tony Allen and Ed Davis back in the fold against the Pelicans, who will be without Anthony Davis but are still dangerous with Jrue Holiday and Ryan Anderson.

The road never looked so good.

Trade rumors, injuries, speculation and butt kickings all were a part of the Grizzlies' 2-4 home stand. Thankfully, Memphis gets to break the possible monotony of the extended stay at the Grindhouse with a quick one-game road trip to New Orleans.

Add this on to the fact that the reinforcements appear to have arrived, and this could be a good night for the Grizzlies. Check out this tweet from Grizzlies' sideline reporter Rob Fischer.

So 9 healthy players becomes 11, and not a moment too soon as the Grizzlies flirt with falling multiples games below .500.

The Pelicans have been dealing with injuries of their own. The major one being to Anthony Davis; he is out for at least a few more weeks with a hand injury. Tyreke Evans came back very early from a sprained ankle and Ryan Anderson has returned from his stint on the injured list to lead the Zombie Hornets in points per game at 21.7. This Pelicans team is a bit different than the last time the Grizzlies played them, where the Grizzlies lost by 15 at home. Here are 3 ways Memphis can get out of NOLA tonight with a win...

Get Ryan Anderson Out of His Comfort Zone

Ryan Anderson may be as close to the second coming of Dirk Nowitzki as they come; a sweet shooting lanky wing big who can score the basketball from range. His strength is not inside the three point line, however; check out his shooting numbers so far this year. 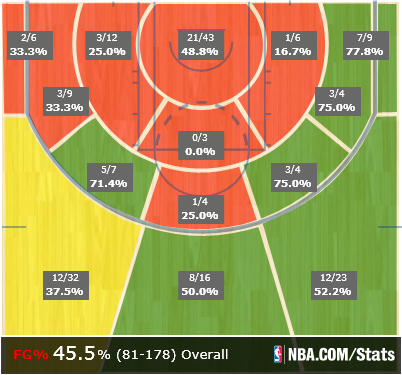 While his three point shooting and elbow game is quite impressive, his inside numbers are, less than desirable. A positive of this match-up is that Anderson will likely have to defend Kosta Koufos or Zach Randolph; that is a mismatch, given the fact that Anderson is shorter than Koufos and not as strong/aggressive as Randolph. Getting his in foul trouble and attacking him in the post is one way to throw off his game.

When attempting to defend him, a possibility would be to have a wing defend him more on the perimeter. Al-Farouq Aminu is not as threatening from long range and is a dominant rebounder at the small forward spot. Forcing Anderson to shoot contested jumpers all night while having a bigger body box out Aminu could kill two birds with one stone.

Certainly cannot be done all game, but throwing different defenders at Anderson could throw off his offensive game as he adjusts to whoever is defending him at any given time.

The Grindfather and Boss Man Cometh

Thank goodness Tony Allen and Ed Davis are likely back in the fold for the Grizzlies this evening. Tony Allen will be able to defend Eric Gordon and keep him honest, while Ed can play that defensive role against either Aminu or Anderson. The fact they are active also bodes well for the offensive end of the court. Tony Allen is enjoying his most efficient offensive season, well, ever, and Ed Davis was really beginning to find himself as a roll man off of picks for Mike Conley and/or Nick Calathes.

These two players can make all the difference for this Memphis team. A shot of tenacity, athleticism and hopefully life will do this roster good this evening.

Since the injury to Anthony Davis, Jrue Holiday has begun to look more like the All-Star PG that the Pelicans thought they were trading for on draft night. He is a steady source of rebounds at the point guard position as well as assists, making him a potential triple double threat almost every night. Mike Conley is obviously no slouch himself; he has been the Grizzlies most consistent contributor on both ends of the court as the season approaches the quarter pole.

In order for the Grizzlies to win this game, Mike Conley will have to get the best of this match-up. Attacking the rim and getting Holiday in to foul trouble would certainly help, and I foresee a good bit of the Conley hesitation move in Holiday's future. Mike defensively needs to be sure to play underneath screens and force Holiday to beat the Grizzlies from range; Holiday is shooting a career best 43% from the three point line so far this season, but that is not where he traditionally makes his money. Force him to become a perimeter scorer so he cannot get dribble penetration to create for himself or for others.

Memphis has been a better road team so far this season, but the stretch of games in which the Grizzlies pulled off that moniker (the famed California road trip) had a Big Spaniard helping to lead the way. This game, only the second on the road without Gasol, will come down to how well the Grizzlies defend the three-point shooting of Anderson and how well they control the glass, forcing Aminu and Jason Smith to be less effective than they have been recently.

Zach Randolph posts a 20-10 line, Mike Conley gets 18 points and 7 assists in a big road win in New Orleans.