Through 21 games, few thought the Grizzlies would be in the position they find themselves. Just 10-11, riddled with injuries, struggling as a new coach implements unfamiliar ideas, the idea of crowning a quarter season Grizzlies MVP is sort of like winning a best actor award in a Fast and Furious movie.

Still, we look at the guy who I really, really, really wanted to give the award to, before I give it to the guy that really deserves it.

Tony Allen's game ain't pretty. The turnovers.  The extemporaneous jaunts to the rim.  The maddening jumpshot mechanics in which the ball cocks itself back like a trebuchet preparing to launch. There are stretches where TA wreaks absolute havoc on all nine guys on the court (eleven if you count the head coaches; 17,011 if you count everyone in building).

Yet, more often than not, Tony Allen grabs his Grizzlies by the scruff of the neck, drags them through the detritus he hath wrought, and they emerge victorious. Don't believe that? Well, it's true. Allen has featured in a quarter of the Grizzlies top used lineups this year. None of them have been outscored.

I understand very little of it. But I learned a long time ago that I don't have to understand it. Having Tony Allen on your team is an act of faith, and while I'm  I'll attempt here to show just how good he's been this year. Because he's been damn good.

There Ain't No Loyalty in this Game.

Zach Randolph responds to the recent trade rumors in Memphis.

There Ain't No Loyalty in this Game.

Tony Allen, by almost every individual and team metric, has been by far the Grizzlies best defender this year. He leads the NBA in steal rate.  4.9% of opponent possessions end with Tony Allen ripping the ball away from his mark's grubby little fingers.  Basketball-reference.com estimates Tony Allen gives up 101 points per 100 possessions, the best Defensive Rating on the Grizzlies this year. The Grizzlies as a team are giving up 6.1 more points (per 100 possessions) than they did last year. Despite this, Allen's Defensive Rating is identical to his career average.

In a season when the Grizzlies have been worse on defense, Tony Allen has been the exact same elite defender he has always been while his teammates have largely failed to hold up their end of the bargain.

Much of the narrative surrounding Allen is how the Grizzlies offense must contort itself to create space while he is on the court. Well, Tony Allen leads the Grizzlies in FG% with a 53.1% mark.  Teams have adopted he Spurs approach and totally ignore TA as an offensive threat.  He has taken advantage, shooting a respectable 44 FG% from mid-range. In the preseason, I suggested it might be a bridge too far to expect Tony Allen to begin making layups, but guess what? He's making me eat my words. 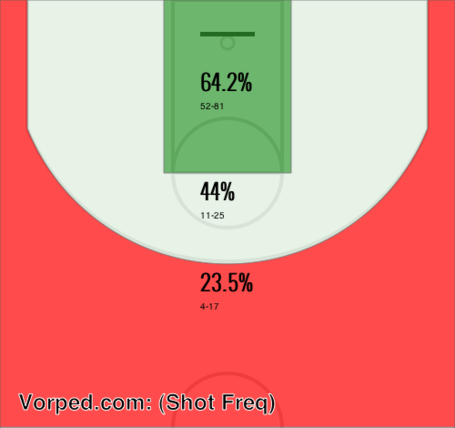 64.2 FG% in the paint is tremendous, especially when you consider that quite a few of them come on Allen's (increasingly effective) forays into the paint, rather than cuts off the ball.

Tony's jump shooting is definitely not sustainable, but even if Tony fails to convert in the paint at the same rate, he looks a good bet to improve upon his career norms in that department. Yay layups!

Which brings me to the most confusing part of all. Tony has, from the first game of the season, seemed determined to carve out a larger role in the Grizzlies offense, and it seems to be by design. Coach Joerger doesn't yank Tony when he goes into iso-mode (at least I haven't noticed this).

Tony's usage rate is not massively higher than year's past up to 19.9% from a career average of 19.3%, but it is higher than the past two years. Coach Hollins seemed determined to confine Tony's offensive role to cuts off the ball and standing in the corner, which makes sense. The thinking goes, minimize the areas where Allen is deficient so he can focus on the areas where he excels.

But perhaps that thinking doesn't work with Tony. Perhaps, in sending not-so-subtle messages that Allen was really only valuable on one side of the court affected his whole game. When your game is constant, relentless I-Am-A-Badass energy, perhaps being told to turn it off is counter-productive. Through the first quarter of the season, Allen is turning the ball over much more, but he is compensating for that by generating more assists.

It seems that changing Tony's role doesn't matter: he will turn the ball over about one time for every basket he creates for a teammate, regardless of whether he stands in the corner, or plunges to the rim with abandon. That doesn't remotely make sense to me, but whatever. It's Tony Allen.

Watch a Grizzlies game and you can't help but watch Mike Conley. Amidst the mediocrity of this Grizzlies season, Conley commands your attention like Nabokov's prose.  He leaps off the screen like, well, this.

In the preseason, I speculated that the most sustainable way for Conley to improve would be to continue his post-Rudy trade rate of getting to the Free Throw line, mostly because I didn't think it was possible for him to become more efficient in ways he was already super-efficient. But sometimes, guys just do the damn thing.

Conley has upped his FG% by 3 points to a career best 47.7%, mostly because he is killing it at the rim.  Per Vorped.com, Conley has hovered around 50 FG%  in the paint for the past 3 years... before skyrocketing up to 57 FG% this year. Impressively, Conley is hitting his floater (the paint zones just below the FT line) at about the same rate as his layups. 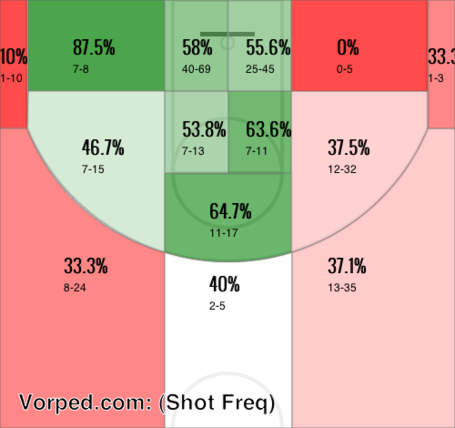 Conley's combined this with a career best 6.8 assists per 36 minutes AND a career low 2.0 TO's per 36 minutes. Oh, and he's handling the ball more than ever before too (career high 24.3% Usage rate).  We can split hairs about which point guards have played better in this young season (Ty Lawson, this guy, and of course this guy), but there isn't much of an argument against Conley being one of the very best point guards alive.

But with so much offensive responsibility, something has to give, right? Of course it does. Conley hasn't hit his 3 point stride yet, and his defense has been sub-par (for him).  His plus/minus numbers have suffered because he has often been asked to prop up the Grizzlies reserve units. But I don't want to quibble with this at all. Conley's improvement has been the ray of sunshine in the ennui of this young Grizzlies season.

Most players get better in their first three seasons in the league, before becoming the player they will more or less be. Conley is rare, in that, he has improved incrementally in each of his first seven seasons. I have thoroughly enjoyed watching him become the player he is, and can't wait to see what his future holds. Hopefully, the future holds a healthy Marc Gasol.