The hits just keep on coming for the Memphis Grizzlies. Injuries, losing streaks and cold shooting have rendered the Bears of Beale Street quite vulnerable. As the Los Angeles Kobes Lakers enter the Grindhouse tonight, a turnaround is possible and a run of success over the next 15 games can be had. How will the Grizzlies find that spark?

Decide the Greatest Grizzlies Uniform of All Time

There has not been much to be excited about so far this holiday season for the Memphis Grizzlies and their fans. Just as two key players, Ed Davis and Tony Allen, come off the injury list, Mike Conley joins the "Hall of Pain" with a thigh contusion. Conley is listed as day-to-day and have only missed 9 games since 2008-2009 due to injury or illness according to the Commercial-Appeal, so it is unlikely he is out long, if at all.

UPDATE: 11:01 AM- Mike Conley is out tonight against the Lakers. Jerryd Bayless will likely get the start in his place.

This can safely be considered a dodged bullet, however, as a Conley extended injury would almost certainly spell doom for the Grizzlies season, which is already on the brink. 10-13 in a loaded Western Conference is certainly not ideal. Talk of tanking, trading and turmoil has permeated the fan base for days now. If the Grizzlies are to turn around their season in this hopefully last stretch of games without Marc Gasol, it will have to begin soon. Over the next 10 games, the Grizzlies play teams with a combined .483 winning percentage, a big change from the .535 Memphis has seen so far. From there, the Grizzlies have a 4 game home stand against the Spurs, Suns, Hawks and Thunder, ending the 15 game stretch with an away game in Milwaukee against the hapless Bucks.

The time for a run is now. Memphis could go 10-5 over this stretch and get back above .500, which was the goal all along without Marc Gasol. Tonight is an excellent opportunity to begin this push against a Lakers team on the second night of a back-to-back. L.A. is 1-4 since Kobe Bryant returned, and injury has forced the Lakers to play the "Black Mamba" at the point more than they would likely care to. Pau Gasol has struggled this season and is the subject of trade talks. Nick Young, the king of swag, was the Lakers leading scorer last night in a loss to the Hawks, which is bad. The Lakers have been worse defensively than the Grizzlies. There is an opening here.

How will the Grizzlies ignite their return to the playoff picture? Three keys to tonight's game.

Jerryd Bayless has been a major disappointment so far this season. His numbers are well below his career averages, and he appears to still be struggling coming off his early stint on the injured list. Here is Jerryd's shooting chart in Grizzlies losses, which must be what Santa's sleigh on fire crashing in to Bob Cratchit's house would look like. 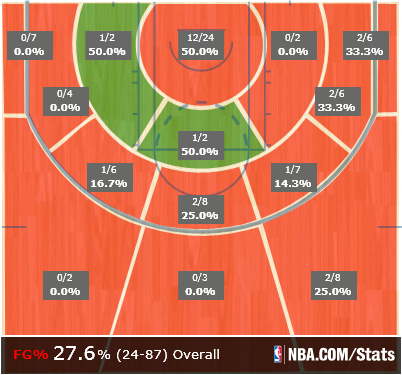 28% shooting. Not ideal. However, this is far, far below Bayless' career averages, and he is not in the twilight of his career like Tayshaun Prince is. He can, and should, recover. Here is Jerryd's shot chart in Grizzlies wins. 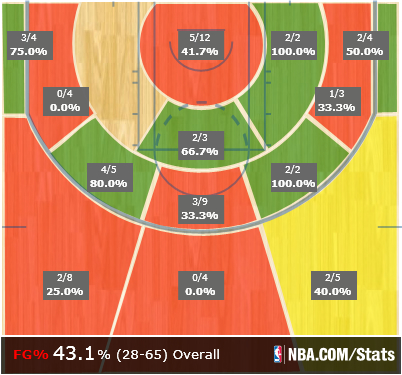 A bit bloated due to his performance in the Boston Celtics match-ups so far this season, but the Grizzlies won those two games. The point is this; Jerryd and his production is needed for this team to win. He showed signs of trying to get out of his slump last game against Minnesota; 4-9 from the field with all of his makes inside the paint, 6-8 from the free throw line. This tells you he is being aggressive and attacking the basket, which shows activity, which means he is beginning to find a groove. Once he finds his outside range again, the Grizzlies will be much more dangerous offensively. Tonight would be a great night for that to begin.

The Lakers are one of the top three point shooting teams in the NBA, shooting 38.6% from long range this season. They also are second in the NBA in three point shots attempted at about 26 per game. When the Lakers win basketball games, it is because they shoot the rock well from down town. Their personnel is built for it; Nick Young (37%), Xavier Henry (39%), Wesley Johnson (42%) and Jodie Meeks (43%) are all capable of hurting you from range.

Helping off into the paint would not be as wise against this Lakers team. With the health of the point guards being such an issue, Pau Gasol struggling and a clearly slowed version of Kobe Bryant, the Lakers are not as dangerous inside the three point line as they are beyond it. Stick your man and do not give up uncontested threes; this Lakers team can make you pay if you allow them to.

While the strength of the Lakers team is offense and scoring the ball, their weakness is defense. As is usually the case with Mike D'antoni coached teams, they are near the bottom of the league in defensive efficiency. The Grizzlies must make the Lakers pay the price for their lack of defensive prowess, but given the fact that our offensive game is not always the best itself, Memphis must make the most of inside opportunity. Zach Randolph in the post, Tony Allen, Jerryd Bayless and Mike Conley if healthy slashing to the basket, Ed Davis rolling off of picks. The inside out game can be obtained in more ways than just a Zach Randolph post isolation.

Are the Grizzlies buying, selling or just self-stimulating?

This Grizzlies team needs to get to the free throw line and force the Lakers to keep them out of the paint. Once the Lakers collapse completely inside, kick it out to an open shooter. The Grizzlies' offense has to be successful getting to the basket and finishing easy opportunities both out of sets and in transition if they hope to win.

This next stretch of 15 games could well determine whether the Grizzlies are buyers or sellers heading into trading season. Tonight, the Grizzlies will rely on Jerryd Bayless' hot scoring, improved three point defense and attacking the basket en route to a much needed win, and hopefully the spark to a season turnaround.