The Grizzlies are on a four-game-losing skid, and two of their current starters are not exactly blameless in those endeavors.

If the Grizzlies are looking or hoping to trade Tayshaun Prince this season then they better start expecting to package Jerryd Bayless and Ed Davis with him just to be able to complete any deal with Prince included, if that wasn't already a foregone conclusion.

Tayshaun started the season off with a nice stretch of games. It wasn't anything too fancy, but he was productive all over the court and consistently put up a few points when we needed them. That was November, the December shadow of the Reanimated Corpse of Prince is averaging 4 ppg (and averaging 2 ppg over the past three). 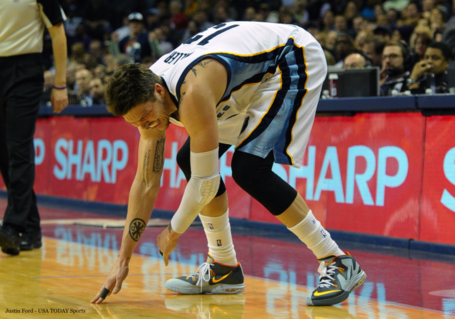 Now Prince is hobbled with a sore left knee suffered in the Lakers game last night. So either he plays and is probably even worse than he's been so far this month, or James Johnson is about to get himself 30+ minutes in a real NBA game.

If the small forward position isn't sad enough, our highly touted backup-center-safety-valve is starting to fade into the background during a time period that should see him in the thick of it all.

Kosta Koufos came in strong right after he replaced an injured Marc Gasol in the starting lineup, but over the past three games he's averaging 15 minutes, 3 pts, 36% shooting and zero trips to the foul line. I'm not sure if Kosta has an undisclosed ailment, or if he's just in a funk with the increase in playing time (which we all thought he could handle given his role in Denver last season).

Should the Grizzlies think about looking forward to next season? Keith Edwards and Joe Mullinax hash out some of the details.

Mike Miller is doubtful to play tonight, along with another evening of rest for Mike Conley, no Marc Gasol or Quincy Pondexter, a struggling Tayshaun Prince now with an ailing knee, a funky Kosta Koufos, a Zach Randolph shooting less than 40% on the month, an ice cold Jerryd Bayless and a backup point guard in Nick Calathes who is still finding his footing in the NBA game.

So our brights spots at the moment appear to be Tony Allen and Ed Davis, who are getting back to form after sitting out with injuries, Jon Leuer, who is fucking awesome, and James Johnson, who hit both of his free throws last night.

We're running out of players, and all I can do is try and laugh about it at this point.

At least the Grizz Girls are still pretty hot.

The Grindmaster from last game (vs Lakers) is split between Tony Allen and Zach Randolph.