The Holidays are supposed to be a time of joy for all. It has left the members of Grizz Nation longing for the past and for better all around production. Jason Levien, John Hollinger and company have said shooting will be brought in at some point this season. Youth and athleticism would also be nice, and how this all occurs will be interesting to watch unfold. The ArmChair GM takes a look at three hypothetical deals, ranging from "tinkering with the roster" to "reset button."

Share All sharing options for: Memphis Grizzlies ArmChair GM: Tis' the Season for Shaking Things Up

It is safe to say that, to this point, the season has not gone according to plan. Whether you blame injury, lack of execution on the court or lack of effective coaching, the reality remains the same; 10-15 a little less than a third of the way through the season. Here are three undeniable truths 25 games in, with some help from nba.com/stats and the Hollinger advanced statistics:

The Gasol injury almost certainly has a lot to do with the defensive efficiency numbers being so poor. He was the quarterback of the defense, like a middle linebacker in football, calling out sets and directing traffic from the rim. Tony Allen, Mike Conley and Tayshaun Prince, however, all have at one point in their careers been considered elite defenders. The defensive struggles existed before Gasol was out, however, and are real.

I tweeted out Wednesday night during the Mavericks game that I would gladly trade some "Grit and Grind" for some "shoot and score." The time may have come to shake things up a bit. In keeping with SB Nation's "Trade Season" theme, here are three deals that would help better the offense and get the team more athletic and young, varying from "tinkering for a playoff run" to "blowing the thing up." All deals appear courtesy of ESPN's Trade Machine. 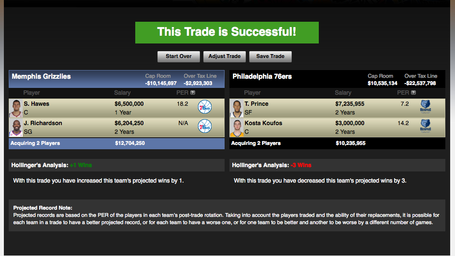 Why Memphis Does the Deal-

Hawes provides shooting at the 4/5 position, something that Memphis would love to have. He started the season red-hot, but has cooled a bit and likey would be most effective in 18-20 minutes per game on a "contending team", or in Memphis' case, a team that could use a better scorer as a big. Jason Richardson is recovering from a knee injury and could be ready to go by February; he provides shooting from the wing position.

Why Philly Does the Deal-

Philly wants to tank, right? Philly could use a defensive center, right? It would appear that way, as they are quite interested it would seem in Omer Asik. If they are to miss on Asik, Koufos is cheaper than Hawes, a solid rebounder and developing basket defender. Tayshaun Prince comes in at the tail end of his career, but he can be a great mentor on a Philly team looking to rebuild/ "tank" and a starter/6th man type at the wing position, until next season. It also saves them $2.5 million while Memphis stays under the all-important tax line. 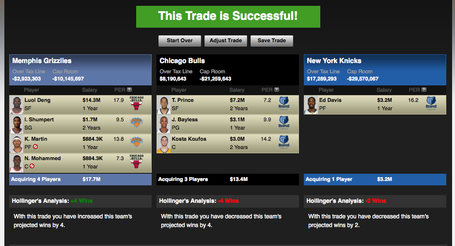 Why Memphis Does the Deal- You want a starting SF? You've got a starting SF, both now and in the future. Deng is an expiring contract, and Shumpert has one more year on a rookie deal. Re-sign him if you want, or allow him to walk after next season. Martin and Mohammed, while not Davis and Koufos, fill roster needs and allow Jon Leuer to get more playing time. Martin and Mohammed are gone after this season, freeing up essentially $16 million off Memphis' books.

Why Chicago Does the Deal- There is a theory floating around that the Bulls are interested in tanking post- Rose. If that is indeed the case, here is a trade that would help with that. Prince becomes more available next season in a trade when he is in the last year of his contract, plus Bayless will be an expiring after this season. Koufos is the key piece here, as he is a solid back-up to Noah and perhaps even a starter on a tanker if they move Joakim Noah, as has been rumored.

Why the Knicks Do the Deal- Ed Davis is young, athletic and can run. Fits a lot of criteria the Knicks would like from their first big off the bench. The 2nd rounder is OK in a deep draft, but the key piece here is Davis. In consistent minutes, he could be a force in the East and is an upgrade athletically over Martin. 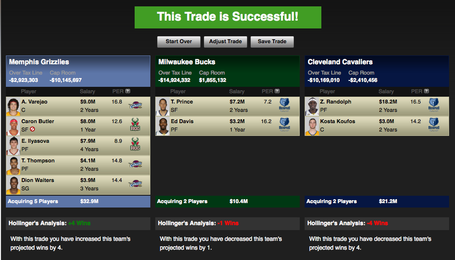 Why Memphis Does the Deal- This is pretty darn close to hitting reset. However, you keep Tony Allen, Mike Conley and Marc Gasol while adding young pieces around them in Waiters, Thompson and Ilyasova. Butler's contract is expiring and Varejao is a solid back-up C to Gasol, albeit a bit overpriced.

Why Milwaukee Does the Deal- The worst team in the NBA cannot get much worse. So, they take on the fading Tayshaun Prince, allowing them to play Giannis Antetokounmpo more and gain another young athletic big in Ed Davis. Between Larry Sanders, John Henson and Ed Davis, the Bucks would be close to having the most athletic front court in the NBA. The 2015 1st rounder from Cleveland, gained in the Jon Leuer trade from Memphis, doesn't hurt either.

Why Cleveland Does the Deal- Cleveland desperately wanted a stud PF in the off-season, being rumored to be interested in DeMarcus Cousins and Kevin Love. They strike out on those two, but they gain a Z-Bo, who can help them on the boards and in scoring in the paint if Andrew Bynum can stay healthy and get stronger. If he cannot, they have insurance in Tyler Zeller and Kosta Koufos. This deal could be contingent of if Zach Randolph decides to opt-in to his contract in Cleveland or if he walks; if he leave Cleveland, it frees up money to look for another piece or two to add alongside Kyrie Irving. If he opts in, he becomes a solid trade chip in the 2014-2015 season.

Get the latest trade rumors, news and analysis from around the NBA in one convenient place.

A lot of speculation and prognostication. As previously stated, though, this team could use an injection of offense, athleticism and possibly some valuable expiring contracts. Notice that in only one of the above scenarios Zach Randolph is moved; it would likely take an extraordinary haul, like the one above, to lead to Memphis shipping him out at this point. His value to the organization and city is too great.

Whether it is a slight adjustment here or there or a complete overhaul, the roster could use an update. How that occurs over the next 2 months will be interesting to watch unfold.

What do you think the Grizzlies should do? Add your own possible deals down in the comments below.