With 1/5th of the season under our belts, it's time to take a look at how the Grizzlies new head coach is doing.

Before the season began I scheduled out specific times to take the pulse of the GBB world and see what you all thought about Dave Joerger at certain points during the season. I scheduled them ahead of time in hopes that that would assist the objectivity of the poll, so I won't be able to decide to take a poll right after a big streak of games, winning or losing.

Here's our first judgement of the Grizzlies new coach. The results will undoubtedly be skewed by how disjointed the team has appeared since Marc Gasol began missing games with a knee injury, but most of you are aware of the issues that Joerger has had to deal with over the month of November.

Because the Joerger hired was heavily weighted on the use and communication of advanced statistics, what better way to critique the coach than by looking those very stats. Some of the numbers to help you find your way:

What we have here is an ugly bag of stats peppered with a couple of bright spots. The only stat that the 2013-14 Grizzlies are currently improving on from their 2012-13 season is their assist ratio. Where is that coming from? Well, this is Memphis' first full season without Rudy Gay, and that basically says it all.

The Grizzlies are failing to live up to last year's performance in nearly every other statistical category, the most indicting of all being the inexplicable drop in their defensive efficiency. The Griz ranked 2nd in the league last year while allowing 97.4 points per 100 possessions. This season's squad is allowed nearly 5 more points per 100 possessions, and has obviously not passed the eye test for elite defense that Grizzlies fans are accustomed to seeing.

The most concerning stats, to me, come in the form of the home and divisional records. The once vaunted Grindhouse is starting to become a doormat for NBA teams, and that's not blame to be put on the fans in the audience. The Grizzlies attendance is nearly identical to what the team was bringing in last season, and the intensity of the FedexForum's atmosphere is very contingent on good basketball being played on the court. Joerger and the Grizzlies aren't holding up their end of the bargain so far.

Additionally, the Grizzlies have the worst divisional record in the NBA. Let that sink in: THE WORST. Out of five bouts with divisional opponents, the Grizzlies have to win one. Now, given that San Antonio, Houston, Dallas and New Orleans aren't pushover opponents you'd find in the Eastern Conference (Toronto leads their division with a 6-10 record), batting ZERO against our most familiar opponents is a very damning stat from a coaching standpoint. 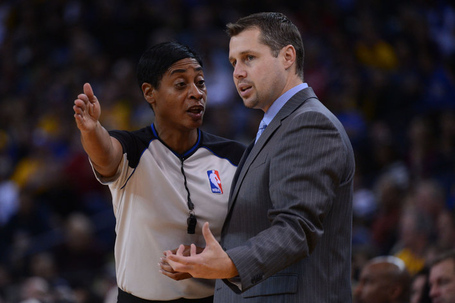 What has Joerger done well? Considering the team has fallen in almost every single statistical category there is, I'm left with very few kind words for Dave Joerger.

His lineup experiments have been bizarre, and they've probably cost us a couple of games. The players aren't motivated by him in the same fashion they were by Lionel Hollins, and while I don't place motivation squarely on the coach's shoulders (those millions of dollars should be all the motivation any player needs), there is an element missing on the emotional front of the Grizzlies.

We've yet to see the payoff of analytics and the "stat junkie" mentality of Joerger (or anyone else in the organization for that matter). Now, it's unfair to condemn that aspect of the team this early in the year, and it's very possible that the numbers look much different in another month. But there doesn't seem to be a concrete plan for their role in the franchise, and that disappoints me with as ballyhooed as the new FO's approach was during their transition to ownership.

Dave Joerger is having to coach effort more than expected

Okay, but there has to be something good to say about Joerger, right?

Yes, there is. He is a phenomenal person and has one of the most pleasant and genuine demeanors you'll find in the NBA. He cares about the Memphis community, and there's no reason to think that he isn't working his ass off everyday in practice. I'd imagine Dave Joerger wants this team to be successful as much as any person on the planet, and his track record shows that he is willing to exhaust himself for the good of the franchise.

Maybe Dave Joerger needs to summon some of his inner-Lionel-Hollins. After all, they say that nice guys finish last, and right now we're sitting at the very bottom of the Southwest division.