The Grizz without Gasol have been a mess, but there is a silver lining. When Marc returns, a bench with better chemistry and more confidence may be just what the team needs.

Share All sharing options for: Jon Leuer, Ed Davis and the Benefits of Extended Play Time

Marc Gasol being out has set the Grizzlies back, no doubt about it. A five-game losing streak during which an already struggling offense was sent into disarray - it was tough to watch. The wins over reeling New York and Utah were comforting at least, but didn't answer any playoff questions. The team is obviously still picking up the pieces of a playbook that exploded when Marc went down, but let's look at the silver lining: even in losses, the bench guys getting increased play time have impressed, and the extra experience may set the Grizzlies up to save the season when Big Spain returns.

Except for one game last year, Jon Leuer had been entirely forgettable on the Grizzlies bench since arriving. Behind an all-star front court, established center Kosta Koufos, and management darling Ed Davis, it was hard for Leuer to even get minutes – and when he did, he played conservatively (but efficiently) in an offensive system not designed for him. In the early part of this season, the only credit he accumulated was the team’s improved shooting percentage with him on the floor, which together with his solid +/-, at least indicated his value as a rotation player. Like Davis, his superimposed "ceiling" kept him from increased responsibility and minutes.

But when Gasol went down, Leuer’s floor time went from 6.9 to 25 MPG and his usage rate (independent of minutes played) jumped from 18.7% to 21%. And here’s what he’s done with it: 10.4 more points per game, 5.3 more rebounds per game, and 25 (total) more 3-point attempts, on which he is shooting 56%. His overall field goal percentage went from 33% to 52%. This a totally different player were seeing. He notched 7 straight double-figure scoring games, and was better than 50% in 6 of them.

Most of Leuer’s attempts are spot-ups, but his bread and butter is the pick and pop. He shoots 66.7% from three on these plays compared to 40% on spot-up 3’s. He can also cut effectively and he’s no slouch at the rim: 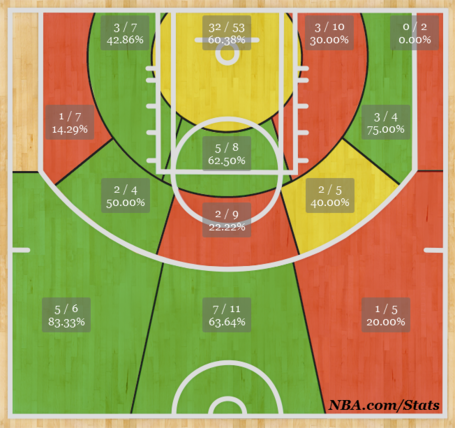 You can see from this chart that he prefers the top of the arc, which will be helpful for spacing Memphis’ wing specialists (especially Pondexter, when he returns).

Leuer and Kosta Koufos have seen expanded time together sans Gasol, and they’ve developed a nice little triangle screen system that utilizes both big men’s range while freeing up those corner threes for Miller, Q-Pon, etc. – almost like a packaged play in football. It starts with the point guard at the top of the key and a big at either elbow:

One comes up to screen for Conley. In this case Koufos:

Then Leuer screens the other side while Koufos (an interior specialist) rolls to the rim. Leuer’s man (Marcus Morris, circled) backs up to cover Koufos…

And Plumlee (22), instead of staying with Leuer, also recovers on Koufos while Conley takes Leuer’s pick. Morris can’t get back in time, leaving Leuer open for 3.

(Notice Dragic come to help, leaving Tony open in the corner. Now imagine Tony Allen is Seth Curry: Jon can kick to him if Dragic pressures too hard.)

Here’s the same play against the Knicks’ matchup zone. Koufos cuts immediately off the screen; Leuer receives the ball from Bayless and is open enough to shoot it, but with no one covering Kosta it’s an easy pass and dunk. They ran the exact same play the next trip down, with the exact same result. (You can do that against New York this year.)

The benefits of Leuer’s improved play time are important. One, his confidence has grown enough to take wide open or rhythm threes – taking open shots has been a point of emphasis for Joerger so far – and he won’t have to worry about being pulled out for missing one. Two, the more threes he hits, the more other teams will scout him and forgo double teams cover him. This makes him a key floor spacer. Three, he has developed chemistry with other bench guys, including Koufos, Calathes, and Davis, which will make Joerger’s all-bench units more effective down the stretch of regular season games and, knock on wood, in the playoffs. Speaking of Ed…

Like Leuer, Davis has seen an uptick in usage percentage and a huge jump in minutes (12.3 to 21). He, too, has taken advantage of it. It’s well documented that Davis excelled in starter’s minutes in Toronto and didn’t do so well in Hollins’ doghouse last season, seeing few and uneven minutes. This season started similarly, and although Davis got slightly more trust out of Dave Joerger, he suffered from scapegoating thanks to his poor performances in losses. Most of that was overblown, but Davis has definitely benefited from post-Gasol playing time with increased responsibility – in fact, he has essentially equaled his half-season production in Toronto in the 11 games that Marc has been out:

The difference is, he’s still not starting (except for 3 games). That’s a big deal. Davis has to be able to contribute as a rotation player as long as Z-Bo is around, (1) to prove his worth and maintain his trade value, and (2) to bolster Memphis’ bench units.

The Grizzlies are starting to take better advantage of Davis’ length by zipping the ball inside and letting him go after it, the way you would with Calvin Johnson on a crossing route. Davis likes these high athleticism plays (who wouldn’t?), and he’s been making great use of them. A quarter of his plays are cuts to the basket and he scores on 47% of them (.88 points per possession). He’s also unbelievably effective on pick and rolls, which make up another quarter of his touches. In fact, would you believe he’s the best PNR man in the league? SynergySports tells us so, at 1.41 PPP and 77.8% shooting.

Where Davis can really be the man is on offensive rebounds and put-backs – Z-Bo territory. He has upped his field goal percentage and scoring rate on the offensive glass significantly from last season. Davis was a superb garbage man in Toronto and the Grizzlies could really use that out of him when they’re back at full strength.

Opening up the Small Forward Search

Pondexter going down and Prince’s lingering ineffectiveness have really thrown the door wide open on the search for a new starting small forward. (Mike Miller is nice to have, but with his defensive liabilities and injury problems, he is not a starting option.) When Prince also sustained an injury, the front office went right out and signed D-leaguer James Johnson to absorb some minutes, and were confident enough to throw him in the starting line-up two games in a row. This was partly a matchup decision, and partly a lack-of-personnel necessity, but it also shows the willingness of the organization to mix and match different small forward types with the team’s starters.

'Twas the Night Before Christmas

A poetic recap of the Grizzlies win over the Utah Jazz on Monday night.

'Twas the Night Before Christmas

Johnson was scoring plenty in the D-league (18+ ppg) and helped with rebounds and assists, but has upped his 3-point percentage with Memphis from 28% to 50% (through four games) in limited minutes. His size and athleticism make him a decent defender, and if the coaching staff can drill some defensive team concepts into him quickly he could possibly be a decent substitute for Prince against the league’s dominant 3’s. With Leuer and, say, Jerryd Bayless on the floor, Johnson adds better-than-nothing floor spacing for Zach Randolph to work with and Mike Conley to drive through.

It’s a stretch, but Johnson could conceivably earn the starting position next year if he explodes after Marc returns and management can move Tayshaun. Even if not, it’s nice to get a glimpse at how a dynamic small forward can grease the wheels on this struggling offense, and it gives the organization a better idea of who to go after when they have the money.

Gasol is set to return in about two weeks. An improved front court rotation seems like a positive thing, but as Kevin Lipe rightly points out, there’s a difference in "deep" and "crowded." Five solid big men is more than most teams have or need – some are even successful without a true center. If Leuer and Davis regress when their minutes are reigned in, the trade rumors will renew with Zach Randolph at the center of them. If the team really is ramping up to make a big trade (before they lose a few big trade exceptions next month), they will appreciate the added value. But if they’re serious about making a run at the playoffs, Joerger appreciate the extra bench experience.