A Statistical look at tanking in the NBA and how it relates to the Grizzlies: Part 1

At 12-16 in the mondo-competitive Western Conference, time is running out for the Grizzlies. In some minds, the time to begin tanking was the second Marc Gasol came up lame. In Part 1, we look at what the return on a trip to the draft lottery yields.

Share All sharing options for: A Statistical look at tanking in the NBA and how it relates to the Grizzlies: Part 1

A week ago, the Grizzlies were just 10-15 and in the throes of a five game losing streak. Twitter resounded with tanking calls. Then, like Gandalf coming back at the turn of the tide, James Johnson was claimed off the waiver wire, inserted into the starting lineup, and the Grizzlies won two straight. The ship had been righted, and everyone can put away their tanking sirens.

But should they? While it may not be time to tank yet, the deciding factor in the tanking calculus isn't back to back wins against two of the worst teams in the NBA. With those two wins, the Grizzlies have moved a measly a half game above the New Orleans Pelicans in the West - a gain that will be wiped out if the Pelicans win their next game. In response to the 2 game win streak, the basketball-reference forecast (too early to be accurate) for the season has only moved about a half game in the Grizzlies direction.

Get the latest trade rumors, news and analysis from around the NBA in one convenient place.

The point is that a fan's view of tanking is usually results oriented, a symptom of disgust with recent play, rather than a call to use an optimal strategy. Is tanking optimal for the Grizzlies? That's the question we should all be asking. To find the answer, I looked at what draft picks return over the long run to get a better handle on just how bad the Grizzlies - or any tanking team - needed to be to get back a star.

What Does a Lottery Draft Pick Yield?

I charted the lottery picks of the past 37 drafts, using a stat called Win Shares, to look at what the average career is for players drafted in the lottery. For those that don't know, Win Shares is a stat that attempts to estimate how many wins a player's raw production yields. Unlike PER, Win Shares is a cumulative stat. Fractional Win Shares accumulate for every point a player generates, and how few points he allows. Each season's Win Shares are added to previous season totals. The end result is a better (albeit, still incomplete) picture of a player's career. You can download the complete spreadsheet of the drafts here.

It is important to note that because Win Shares is a cumulative stat, the drafts all the way back to 1996 (I see you Kevin Garnett) are still accruing Win Shares. The closer you get to present day, the less complete a picture you have.

The results are not surprising. In general, the higher the pick, the better the player. Of the prior 37 drafts, the best player in the lottery was picked first 10 times, and over half were drafted in the top three. The top pick yields an average career of 69.03 wins, or roughly the career production of Larry Johnson (the Grandmama for those that remember). Meanwhile, the 10th pick yields less than half the wins, a less-than-stellar 32.46 wins, or roughly the career production of John Salmons to date.

Weirdly, the 9th pick slightly outperformed every pick 6-10, yielding an average career of 40.21 wins. In three consecutive years, Tracy McGrady, Dirk Nowitzki and Shawn Marion were drafted 9th, while Adonal Foyle, Larry Hughes and Andre Miller were taken 8th. Andre Miller has had a great career, but that is just Wow. It's foolish to argue that the 9th pick is somehow more valuable than the 6th pick, so let's chalk that up to a slightly noisy data set. 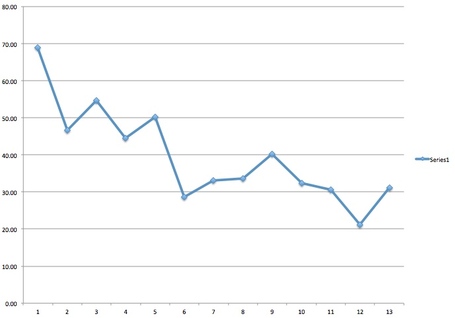 What's important, and probably too significant to chalk up to noise, is just how much more valuable the top pick is than any other pick, and to about the same degree, how much more valuable a top 5 pick is than picks 6-13. In the chart above, you can see the two large declines. Every pick in the top 5 yields a minimum average of 44.58 Win Shares (Rick Fox's career). From 6-13, only the weird 9th pick yields an average of more than 33.65 Win Shares.... or the career of Greg Ostertag. Guh!

But This Draft is So Great, I've Been Hearing About It Since These Guys were 14 years Old.

The other argument for tanking is that this is a great draft, and you can find a great player as late as the 7th slot, or possibly beyond. With all due respect to the "experts," the "draft pundits" and the random people on twitter peddling the "experts" and "draft pundits" tweets as their own, the numbers do not support that claim. Or, at the very least, they point towards that specific claim being highly unlikely. Even in historically great drafts, the drop in production from the top 5 to picks 6-13 is usually precipitous.

Let's focus on the best draft ever - the Hakeem/Jordan/Barkley draft of 1984. Of the 6-13 picks that year, only Otis Thorpe and Kevin Willis turned into above average NBA players. 2003 was the greatest draft in recent memory, but only three players picked 6-13 (Kirk Hinrich, Chris Kaman and Nick Collison) still remain in the NBA. Unless Michael Sweetney is hiding on the end of a bench somewhere... and if I remember correctly, Michael Sweetney was pretty easy to find.

Only five times in the past 37 drafts has more than one player drafted between picks 6 - 13 accrued more than 80 Win Shares for their career. The 2001 lottery has an outside shot of joining that list, if Richard Jefferson and Shane Battier can stave off father time a little longer. 2004 (Luol Deng and Andre Igoudala), 2008 (Brook Lopez and Danilo Galinari), and 2010 (Greg Monroe and Paul George) are the only good bets after that date to join the list.

While no specific deals appear imminent, the Grizzlies are actively looking for trade opportunities to improve their wingmen.

Jon Leuer and Ed Davis are benefitting from increased playing time, read on to find out how!

Other than 2008, how many of those drafts were particularly notable? Though there may not be a way to quantify this, it does not seem as if there is a correlation between how much talent the pundits say is in the draft and how much talent is actually in the lottery after the top five. Even in historically great, "Ehr Mah Gerd This is the Greatest Draft I've Ever Seen" Drafts, it is not very likely to find a true impact player outside of the top five.

This is not a comment on the upcoming draft. I am far from a draftnik. It could be that the pundits are right, and several player selected in the mid-to-late lottery have fantastic NBA careers. But they are arguing for a historic anomaly, an occurrence that would be out of step with NBA Draft history, and is incredibly unlikely given the data we have at present.

Due to the mechanics of the NBA draft lottery, a tanking team doesn't control exactly where they pick. At most, they control the probability of the range they will pick in. This seems like a small difference, but it is actually pretty massive. Having the worst record does not guarantee you the first selection; in fact, it only gives you only a 25% chance at the first pick, 21.5% chance at the #2 pick, and so on. To figure the expected value of a given record, we only need to multiply the probability of each pick by the Win Shares that pick, on average, yields. You can download that spreadsheet here (Feel free to check my math because: English Major).

What you see is that even though the expected Win Shares flattens, the overall production gap remains. The worst team in the league can expect a return of 52.92 Win Shares based on their chances of picking 1st through 4th. The 2nd and 3rd worst teams expect nearly the same value, as they are almost assured of securing the crucial top 5 pick. The drop off doesn't begin until the 5th and 6th worst records. 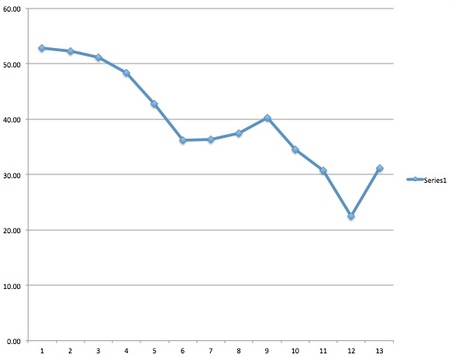 How does this relate back to the Grizzlies? Based on the numbers, there is little utility to tank for the 6th pick in any draft. There is a difference in picking 13th and picking 6th, but over the long run, it is probably not optimal to trade away talent to move up unless you can "move up" to the 5th worst record. There is a tremendous amount of value added from jumping from 6th worst record to the 5th worst, and from the 5th worst to the 4th worst.

So unless the Grizzlies can become one of the worst 5 teams - and that will be pretty tough this year - there just isn't much to gain by tanking. In Part 2, we will look at, perhaps, another road forward for the Grizzlies.