Assessing the Assets of the Memphis Grizzlies: Time to Tank Part 2

In Part 1, we looked at the expected return from a lottery pick. Given the results, maybe tanking isn't the best strategy. But what is?

Share All sharing options for: Assessing the Assets of the Memphis Grizzlies: Time to Tank Part 2

I wish Dalton's words were true.  But he's wrong. Pain do hurt, and this Grizzlies season is proof. Coming into the season with legitimate title aspirations, the Grizzlies are now a long shot to make the playoffs. Not a super long shot, and definitely not as long-of-a-longshot as Basketball-reference.com has them at (currently a sterling .7%). But if we are being realistic, the Grizzlies are more likely than not to be sitting on their couches when the playoffs start.

So, should the Grizzlies tank the season? Well, we covered that in Part 1 and where were you?!?

Just to recap, there is very little gained by moving up the worst record pecking order, unless you can get to one of the worst five records.  Over the long run, the gap between the 5th and 6th worst records, in terms of Win Shares, is larger than the gap between 6th and 13th. You gotta get baaaaaaadddd before you get good.

Time to Tank? Part I

A statistical look at tanking in the NBA and how it relates to the Grizzlies.

Time to Tank? Part I

One other important anti-tanking note: with each year that passes, it is becoming more and more dangerous to consider "throwing away" a year of Marc Gasol's prime. Over the last three years, Gasol has been incredibly productive, inarguably the most productive and successful center in the league, and has played a ton of minutes. He is one of only thirteen players to play over 7,700 minutes over the past three full seasons (Mike Conley is also on that list).

The last thing I'm saying is that the Marc Gasol era is winding down. Nevertheless, it is likely that Gasol never enjoys another three year run as productive as '10-'11 through '12-'13. The Grizzlies aren't in a position to just throw away Gasol seasons at this point.

The Grizzlies shouldn't sell off productive players this year, simply in the hopes of getting bad enough to get a top five pick. Unfortunately, they don't have many future assets to sell to add a few crucial wins to this year's total either.  I can't really advocate a trade for Thaddeus Young, Kyle Lowry, or any of the other oft-rumored-to-be-traded veterans. I mean, I guess if Philadelphia would take Ed Davis and Tayshaun Prince for Thad, then we could do that deal, but really, they should be hunting for picks for his services.

If anything, the deals I suggest are probably ones that the team should consider regardless of the type of year they are having.

Well, not really. But when I think about it, that's sort of what I'm suggesting.  Most teams fall into one of the following categories:

The Grizzlies find themselves in the uncomfortable position of being too good to tank, but too bad to really push for the playoffs. The silver lining of the Grizzlies' situation is that being absent of a plan allows you to be a part of anybody else's plan. Needing to "Win Now" incentivizes you to do deals that impact the future. Conversely, "Tanking Now" makes you mortgage the present and immediate future. "Clearing Cap Space Now".... well, we know what that does. Being without a plan means nobody has leverage against you, and you can do deals that are in your best interest. In other words, it's the exact opposite situation that Daryl Morey has with Omer Asik.

Completely Off the Table 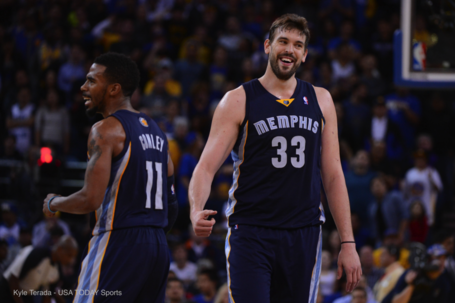 Weirdly Off the Table 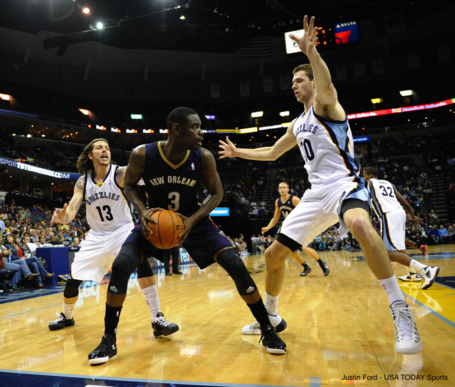 Jon Leuer and Mike Miller. Leuer is far too productive for his contract to be included as an incentive, and he won't command a 1st round pick coming back.

And, in my opinion, it would be just wrong to trade Mike Miller, a player who specifically chose Memphis over the best team in the West right now. Arm chair GM's can free themselves from silly things like loyalty, but this one won't. Unless Miller specifically requested a trade to a certain team, it would be wrong to ship a man that means that much to the franchise someplace he doesn't want to go.

More Off the Table, Than Not 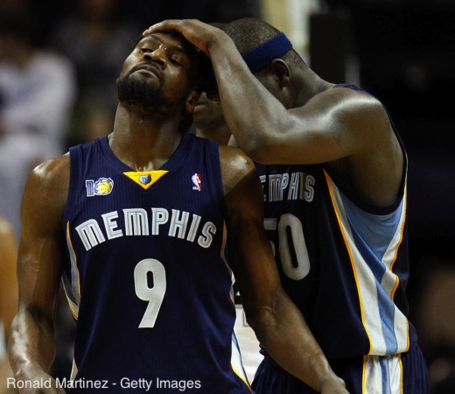 While I could imagine situations where Tony Allen or Zach Randolph are dealt, most would fall under the "pipe dream" category.  Neither of these guys should be traded in any deal where the chief asset returned is an expiring contract, or non-lottery pick.

Zach Randolph is still far too productive, regardless of his contract size, to be sloughed off for cap flexibility. The Grizzlies have already traded a future 1st round pick specifically to avoid making this type of deal.  The production you lose from ZBo, as we covered in Part 1, will not be replaced by moving a few draft slots higher. It would take a more productive player coming back (the rumored Ryan Anderson deal), for the Grizzlies to make a ZBo deal. Trading Randolph puts the Grizzlies right back in the same situation they're in now: needing to make a deal to upgrade the roster to make the playoffs.

There's almost nothing to talk about with Tony Allen. His contract is pretty reasonable, and several teams could use a defensive minded wing, but what return are you getting for him?  Tony's worth more to next year's Grizzlies team than a couple 2nd round picks and a young player.

Can't Afford To Trade Him 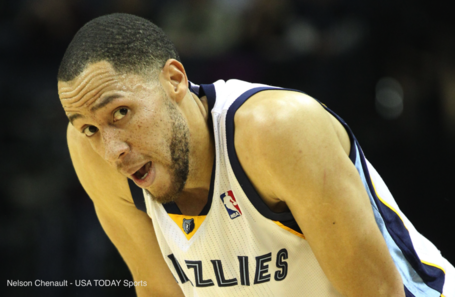 Tayshaun Prince. The Grizzlies are under no pressure to trade Prince's contract, and let's be frank, we'd have to include an asset or two to get someone to take him (assets like picks, that the Grizzlies just do not have right now).

Even a silly deal like Zach Randolph + Tayshaun Prince for Amare Stoudemire + Tim Hardaway Jr + the rights to swap picks with the New York Knicks in 2015 and a 2018 1st rounder really sacrifices too much production next year to be worth it.

If You Squint Hard Enough... 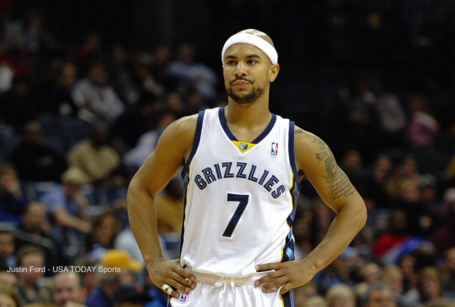 Jerryd Bayless and Nick Calathes (and Jamal Franklin). Bayless has cratered, and it has been astonishing to watch. Every number is down from both last year, and his career averages. If he begins to play better, he's on just a $3mm expiring contract, so perhaps he could garner a 2nd round pick and a trade exception, or perhaps Hollinger could find another buried treasure Jon Leuer type.

I haven't liked anything I've seen from Nick Calathes, but it's too early to give up on him and he makes next to nothing so why not keep him?  The barrier for Calathes to be a capable backup point guard is that he can't score. Establish the ability to finish in the paint, or a jump shot, and he's more than worth his contract. 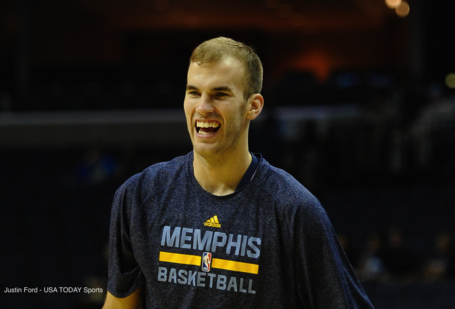 At this point, with the way these two are playing, the only way Bayless or Calathes are traded is filler in another deal. Ditto for Jamal Franklin, who hasn't played enough to accurately gauge what he is.

And that brings us to the only logical trade avenue for the Grizzlies.

The Big Man Logjam, or There Can Be Only ONE!!! 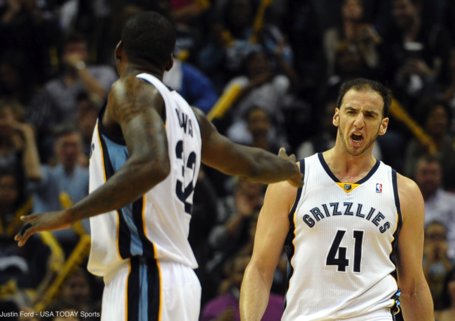 Quick side bar: why hasn't "Highlander" been re-made yet? Instead of re-making the American classic "Roadhouse," a movie made so perfectly crappy that it cannot possibly be improved upon, remake movies that are kinda crappy, and kinda awesome, like "Highlander." You could even have Sean Connery reprise his role as the mentor, and there are a whole host of people that could improve upon Christopher Lambert's rendering of Connor MacLeod. There is not a man alive today that could possibly be Dalton any more than Patrick Swayze was. RIP Swayze.

Anyway, back to the column.

Koufos probably has more most trade value than Ed Davis, and his name is probably interchangeable in any of the deals I suggest in the next few hundred words, but there are several reasons why Ed Davis would be the best asset for the Memphis Grizzlies to sell.  The biggest reason is that it is extremely likely he will not play up to the next contract he gets. Let the problem of properly quantifying what Ed Davis is worth be somebody else's problem.

And because Ed Davis is a productive young player on only a one year deal, there are several deals that could be done.

The Grizzlies could trade Ed Davis to the Portland Trail Blazers for Allen Crabbe, Victor Claver and a heavily protected future 1st round pick, one that may not come due until 2018.

Portland is in "Win Now" mode, and their plan for a championship is clear: score a ton of points, and hope to patch together enough of a defense to win. The backup center position is a mess in Portland and Kosta Koufos may be better than starter Robin Lopez.  Conversely, the Grizzlies were linked to Allen Crabbe during the draft, and he offers some shooting - albeit from a position that is not ideal. Neither Crabbe or Claver has played, and the 1st round pick is payment for letting Portland keep C.J. McCollum.

The Grizzlies could trade Ed Davis to the Miami Heat for Joel Anthony and the Philly protected 1st round pick they own.

Joel Anthony is due $3.8mm this year and has a player option next year, while logging a mere 33 TOTAL MINUTES so far this year. Acquiring Ed Davis gives Miami a big man that can actually play their style, reduces their payroll by $700,000 (saving them another $700,000 in luxury tax) and, crucially, frees them from Joel Anthony picking up his player option next year. Memphis gets the Philly pick (lottery protected for the next two seasons, turns into two 2nd round picks if not conveyed by 2015) as payment for helping the Heat win another title, giving them a Bosh backup plan, AND saving them money.

The Grizzlies could trade Ed Davis (and possibly Jerryd Bayless) to the Charlotte Bobcats for Bismack Biyombo and the rights to Portland's protected 1st round pick (likely to convey this year).

It is weird to think of Charlotte as a playoff team, but they kinda almost definitely are. As things stand today, the Bobcats would ship their 1st round pick to Chicago (top 10 protected), but they would also gain Detroit's 1st round pick (top 8 protected) to roughly replace it. In the bleak, sun-blighted landscape of the Eastern Conference, both the Bobcats and Pistons are playoff teams, and are for better or for worse, in win now mode. The Bobcats have clear deficiencies at center and on the wing. Wish the Grizzlies could help more on the wing. Meanwhile, Memphis turns Ed Davis into two years of a young big on a rookie scale salary that has shown some frisk in limited minutes, and a pick in the 20's to make up the difference.

There are several other teams that may be willing to part with a future pick of some type - Dallas, Minnesota, even Houston (if an Asik trade ever materializes) - for the ability to add a rotation level big to their playoff push.

The return may look silly when you think of Ed Davis as the main return in the Rudy Gay trade, but that type of thinking is counter-productive for several reasons, first and foremost, the Grizzlies would have never made the Western Conference Finals with Rudy Gay. Secondly, getting ANYTHING for Rudy Gay, as Toronto just showed, was a win. And finally, the Grizzlies would be hunting for far different deals if their best player were healthy and in the thick of the playoff hunt. Where the Grizzlies find themselves with Ed Davis is as much a product of misfortune, as it is anything else.

So there you have it. Trade a big man. Get a future asset. Don't remake "Roadhouse." That's not a tanking strategy, but it is a recipe for success!