Grizzlies vs. Clippers: Three Trends to Watch For Now and Beyond

The Grizzlies take on the hated Los Angeles Clippers tonight at FedEx Forum. How can Memphis continue their recent domination of Blake Griffin, Chris Paul and company?

Share All sharing options for: Grizzlies vs. Clippers: Three Trends to Watch For Now and Beyond

The Memphis Grizzlies have completely owned the Los Angeles Clippers in recent history, and that is just fantastic to be able to say. The Grizzlies have won the last 5 contests they have played against L.A., most recently in Staples Center during the four game road trip through California. Of course, Marc Gasol was available in that game, and his 23 points, 9 rebounds and 8 assists will most certainly be missed. Zach Randolph had 26 points and 15 rebounds himself and was not hampered by a bad Z-Toe. This Grizzlies team going to battle against the Clippers tonight looks a bit different than the last time these two teams met.

However, the same can be said for the Clippers. JJ Redick is out, Matt Barnes has a retinal tear and did not travel with the team and the Clippers have lost two straight as they continue a seven game road trip. The Clippers lost a tough one last night against the Atlanta Hawks and are undoubtedly tired of giving up 100+ points and losing to "inferior" teams. This game is ripe for an attempted Clippers statement, against a team that even they acknowledge is becoming quite the rival.

So, how can this modified version of the Grizzlies pull out the victory tonight and continue the winning trend? Here are three possible trends that will hopefully continue tonight:

Mike Conley has stepped up big time with Marc and Zach out of the roster, facilitating for others more than usual. His 18 point, 14 assist game against the Suns this past Tuesday was a wonderful example of how Mike can help set up success for everyone around him. He also had 9 assists against Boston and making the Grizzlies that much more dangerous on the offensive end. Kosta Koufos, Ed Davis and Jon Leuer all had great games, but a good chunk of their success came from the hands and eyes, hands and feet of Conley.

Mike needs to continue to be the focus of the offense, especially with Zach back in a likely limited role. If he can get Chris Paul in foul trouble off of drives and pick and rolls while getting Kosta and Ed involved, it is going to be a good night for the Bears of Beale Street

Tony Allen, Memphis' beloved Grindfather, while struggling on defense at times, is also doing some good work creating turnovers. He is averaging over 2 steals a game, a career high. These turnovers have allowed Tony to score in transition, where in theory he is best suited to help this Memphis roster. But TA had really come along shooting the basketball so far this season; here's a look at his shot chart last season. 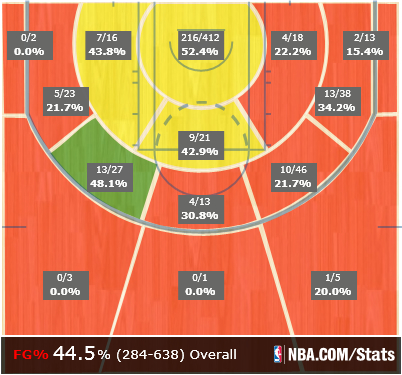 And here are his shooting percentages through this season's first 17 games. 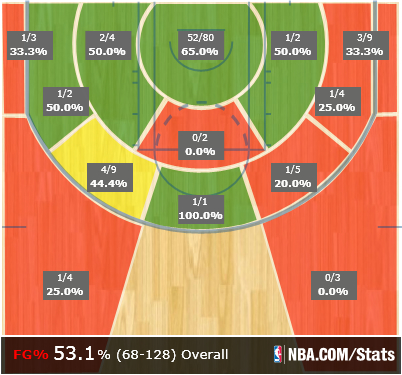 His one major area of improvement so far has been his ability to finish at the rim. Like Mike Conley, it appears that TA has made this a focus this season, and it has led to him averaging a little over 10 points per game, 2 more than his career average. TA as a slashing guard who can finish at the rim is all the more dangerous as a basketball player, and if he is able to do so tonight against a depleted Clipper wing rotation Chris Paul could be looking at a little too much Willie Green and not enough Jamal Crawford in crunch time.

After re-watching a bit of the Suns game, I felt that Dave Joerger did a pretty good job as a head coach. He was better with his rotations, was able to make a much needed point to Quincy Pondexter and still pulled out the win. He also made Eric Bledsoe and Goran Dragic, Grade A Grizzly Killers, miserable for the entire game by forcing them to chase around Mike Conley and try to contain the energy bomb that is Tony Allen. This leading to frustration resulting in a poor night from Bledsoe and a technical foul for Dragic.

He also has found ways to play to his young big's strengths, whether it is getting Jon Leuer open long jumpers or allowing Ed Davis to play as the roll man off of picks more. The Grizzlies defense Joerger came in to a less than envious situation replacing one of his mentors and former boss Lionel Hollins and is still finding himself as a head coach among these players. The X's and O's have never been in question; Dave Joerger was regarded as one of the brightest assistants in the NBA before he became the head man.

More: Check out Clips Nation to see what they think in LA
Joerger's handling of the Quincy Pondexter situation will have positive long-term effects.

His handling of the Quincy Pondexter situation, however will likely have a long term impact on this roster going forward. He showed that he is the man in charge, it is his team and you will play within his rules, or you will not play at all. Players can respect that when done at appropriate times, and it appears this was one of them. Quincy Pondexter will be better for the discipline and this team will be better long term for the minutes the young guys are getting.

Conley's facilitating, Allen's offensive prowess and Joerger's improvements will all hopefully carry on through the Clippers game and in the future.