Memphis Business Journal surveyed print and email subscribers over a two-week period to discover who was the favorite Grizzly of Memphians.

Oh my, how things have changed since the year 2008. Roger Federer is no longer the best tennis player in the world (albeit he's still the best of all time), Tiger Woods no longer wins major PGA tournaments and Peyton Manning no longer plays for the Indianapolis Colts.

More: Marc Gasol could make an early return from injury

You know what else? Marc Gasol is no longer the "younger-brother-toss-in to the most lopsided trade in NBA history."

According to the polling done through Memphis Business Journal, Marc Gasol is now the favorite Grizzlies' player in the city of Memphis. This is particularly impressive for Gasol, whose popularity competes with Memphis institutions in Zach Randolph and Tony Allen.

Allen and Randolph tied for second as the most favorites Grizzlies player. 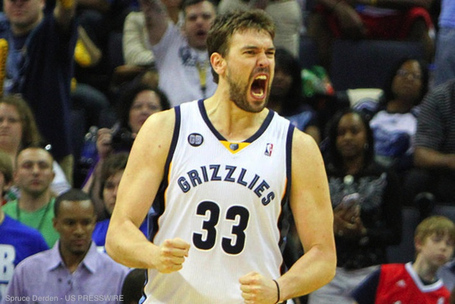