Memphis had a weakened Zach Randolph and were down a Grindfather Thursday night as they took on the Clippers. How did a Tony Allen-less Grizzlies team play against arguably their greatest rivals?

The Memphis Grizzlies came into tonight's game against the Los Angeles Clippers looking a lot like the walking wounded. Zach Randolph was a surprise start as he attempted to fight through an ingrown toe recovery while Tony Allen was a surprise scratch from the contest against the Clippers due to the hip injury he suffered against the Suns. Memphis would need the likes of Quincy Pondexter and Jerryd Bayless, who got the start for TA, to step up against the Clippers. Unfortunately, the Clippers bench and defense was too much for a depleted Grizzlies squad and Memphis fell to their rivals in a game that was a tale of two halves and ice-cold Grizzlies shooting in the second half.

Memphis was out of sync early committing a couple of bad turnovers. The lack of minutes together for the Conley/Bayless/Prince/Randolph/Koufos starting lineup was showing in the miscommunication on the court. They had played together 5 minutes in 3 games before tonight according to nba.com/stats. The Clippers started slowly as well, however, with Blake Griffin struggling early especially, shooting 3-9 in the first quarter.

Bayless facilitated well at times, passing to Tayshaun for an attempted fast break lay-up where he was fouled as well as a Conley made three. Quincy Pondexter got out of the dog house and checked in with 4 minutes left in the first, showing good early focus. Zach struggled mightily early; 6 rebounds, but 1-4 shooting and 4 turnovers. Blake recovered a bit and led the Clippers with 8 points, 3 assists and 3 rebounds. Conley had 7 points to lead the Grizzlies to an ugly but good to see 20-18 lead at the end of the first quarter.

Quincy Pondexter's energy was clear and a big bonus to the start of the second quarter. He threw up a great lob pass to Ed Davis for an alley oop and seemed very engaged on both ends of the court. Hopefully the issues between Q and Coach Joerger are in the past, as Quincy is quite valuable when he plays within himself.

Speaking of Ed Davis, he hit an elbow jumper and had a beautiful post move as he took advantage of the Clippers bench bigs. He came down funny on his ankle, however, and had to come out of the game at this point. An Ed injury would be a big blow to the Grizzlies, especially since it seemed like he had begun to find himself within this Grizzlies team.

Ed Davis' production was missed after he exited the game with an ankle sprain.

Mike Conley showed a continued mastery of the hesitation dribble drive and finish, the Grizzlies led by 7 after a transition opportunity created by Quincy Pondexter led to a slam jam by Jon Leuer, aka White Cheddar aka Jonny Badger aka Jonny Basketball aka the Beale Street Badger aka Jonny Leu. Leuer did not play his best game, however; as good of a match-up the Suns were for the Jonny Badger, this Clippers team gave him issues throughout the second half.

Quincy continued to create on the defensive end, forcing turnovers that would lead to additional much needed offensive opportunities for Memphis. Kosta Koufos continued to struggle through the end of the half, picking up a cheap technical and not being able to find a rhythm in the paint. He finished the half well though, completing an and one opportunity off of a Z-Bo pass to end the half 42-40, the Grizzlies in the lead.

The third quarter picked up where the first half left off; aside from a Koufos and Z-Bo post score the offenses for both teams continued to struggle. Blake Griffin and Jerryd Bayless had a run in as the quarter unfolded; Jerryd attempted to run through a Blake Griffin pick pretty aggressively and knocking him to the ground, picking up a flagrant foul after review. But Griffin is 6'10" and 250 pounds; Jerryd is 6'3" and 200 pounds soaking wet with 2 bricks in his pocket. Chants of "Flopper" rained down on Blake as he shot his free throws, and Chris Vernon (local radio show host) tweeted this gem out...

ZBo now yellin at Doc Rivers - "He soft! I told you he soft!" hahahaha

A Blake Griffin dunk later led to a 47-47 tie, while a Chris Paul three point bucket got the Clippers a three point lead. Chris Paul and the Clippers were doing a good job of getting into the paint and getting easy score opportunities for Blake and DeAndre Jordan. The officiating began to leave a bit to be desired, to say the least; Mike Conley was becoming visibly frustrated with the lack of calls against Chris Paul and it began to get to the Grizzlies. But the Clippers, to their credit, were getting loose balls and hitting shots, while the Grizzlies were not. The offense also was struggling mightily for the Grizzlies; Chris Herrington of the Commercial-Appeal nailed it with this tweet.

Most important aspect of this game is that absence of Gasol allows Clips to guard Randolph with DeAndre Jordan.

The Grizzlies started the fourth pretty hot, considering. Two straight buckets cut the lead to 7. However, the Clippers Darren Collison and Jamal Crawford hit big buckets to get the lead back to double digits. The Grizzlies just could not score the basketball; it is hard to win a basketball game in the NBA while shooting 34% at any point during the fourth quarter.

With Balke Griffin and Chris Paul resting on the bench, Crawford, Collison, Reggie Bullock and Antwan Jamison's decomposing corpse combined for 50 points off the bench for the game.The Grizzlies bench, by comparison, scored 31, led by Quincy Pondexter's 15 on 4-12 shooting.

The Grizzlies shooting overall was atrocious, as is shown in this 2nd half shot chart, which reminds me of a Christmas Tree ablaze with the sweltering heat of a thousand infernos. 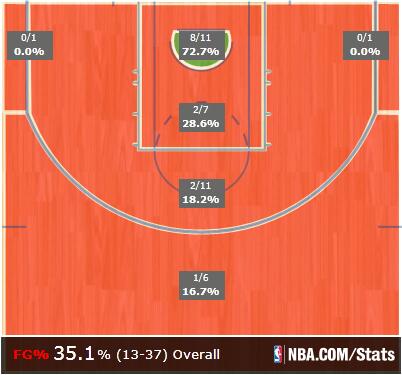 The Clippers hit 10 threes and outscored the Grizzlies by 22 points in the second half, taking advantage of 16 Grizzlies turnovers to the tune of 19 points off of those turnovers. Chris Paul did not play in the fourth quarter. At all. The Clippers began to get into their pace, pushing the pace and connecting on open jumpers with their bench and DeAndre Jordan on the court. The Grizzlies had 5 players either banged up or out in this contest, and because of the lack of key players, the Clippers' hot shooting and great defensive keying on Mike Conley the Clippers were able to get the victory.

Memphis needs to stay home tomorrow and avoid the ice. With their luck, Mike Conley will slip and fall, throwing out his back. Health needs to be the priority heading into another early season match-up with the Splash Brothers and the rest of the Golden State Warriors.