As the city of Memphis continues to be under a deep freeze, the Grizzlies hope to thaw out their offense against a team that they have found a way to beat twice so far this season. The Golden State Warriors, led by the Splash Brothers Klay Thompson and Stephen Curry, will look to end the recent trend of Grizzly dominance against them. Will this walking wounded version of Memphis find a way against the Warriors, who are missing a star of their own?

One of the great and terrible things about the NBA is the long and arduous season that all teams have to deal with. On one hand, whether it is a dominant win or a crushing loss, a team has to be able to move on and find a way to prepare themselves for the next game. While the loss to the Clippers Thursday night was disappointing, it was one game out of eighty-two. Memphis gets a chance to move on and continue their home stand tonight against a team that they have beaten twice already so far this season, the Golden State Warriors.

For the Warriors Perspective, head over to Golden State of Mind.

On the other hand, injuries are a very real part of the NBA schedule. The previous two meetings should not be a direct reflection of how this game will go down because of this factor. For those two wins, the Grizzlies had Marc Gasol. While Kosta Koufos has done exactly what we had hoped he would do and been a solid replacement for Marc (he has averaged 11 points, 11 rebounds and 2 blocks the past 5 games), he is not the most skilled big in the NBA like Big Spain is. Golden State is without Andre Iguodala, who ran the point the last time they played Memphis with Stephen Curry out. Curry is back in the lineup for tonight's game.

The grind of the NBA season can be both a gift and a curse.

The battle of attrition and survival that is the NBA schedule continues tonight. Despite the slow start, Memphis is only 2 games behind in the loss column from the four seed in the Western Conference. How can the Grizzlies overcome, gain ground in the West and find a way to win at home against a Golden State team that will likely be looking for redemption after the previous two losses to Bears of Beale Street? Here are three keys to a Grizzly win.

Stats courtesy of NBA.com/stats and ESPN.com

Steph Curry and Klay Thompson are both having ridiculous seasons. Combined, they are averaging 43 points per game on 47% shooting overall and 45% shooting from three point land. Forcing them to take contested jump shots is a clear key, but another way the Grizzlies can attempt to limit the Brothers of Splash is make them work hard defensively.

Whether it is forcing Steph Curry to fight through multiple screens, making Thompson fight hard against slashing wings like Tony Allen or Jerryd Bayless or setting extra strong picks with Kosta Koufos or a hopefully active Ed Davis, exerting energy on the defensive end of the court can throw off Curry's and Thompson's offensive mojo. Mike Conley especially will be depended on to get Steph Curry running all over the court chasing him and potentially getting him into foul trouble with his much improved finishing at the rim.

In the two games against the Warriors so far this season, Z-Bo has been quite impressive. He has averaged 22 points and 12 rebounds when matched up against Golden State. Once again, however, this was with Marc Gasol in the line-up. Andrew Bogut was forced to guard Marc, so Zach had a very favorable pairing with David Lee, one of the worst post defenders in the NBA. With Gasol out, however, Zach has struggled. In the last 5 games, Zach has averaged 15 points and 9 rebounds on 36% shooting. Here is Zach's shot chart for those 5 games, 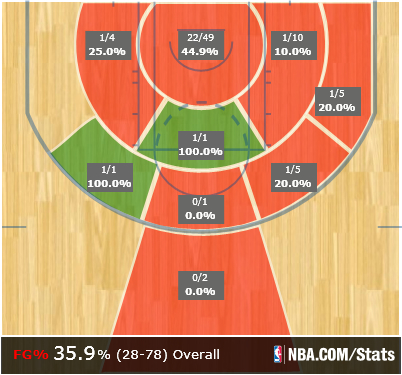 The struggles in the paint and from just outside are concerning. Without Marc, the Clippers, for example, were able to put DeAndre Jordan on Zach more, putting Zach in a tough situation being guarded by a longer and more athletic big. With Kosta Koufos' size, Andrew Bogut will likely still have to defend him some. If Bogut is guarding Zach at times, however, Zach may continue to struggle against bigger longer defenders, especially if his big Z-Toe continues to hurt him. The Grizzlies will need Zach to pick up his play if they hope to continue to survive without Marc Gasol, and a game against the Warriors may be just what the doctor ordered.

Aside from a 15 point performance from Quincy Pondexter and a solid early showing from Ed Davis before his injury, the Grizzlies bench struggled mightily against the Clippers. Jerryd Bayless started because of an injured Tony Allen sitting out, but between him, Mike Miller, Jon Leuer and Quincy the role players shot a combined 10 of 31. Nick Calathes, who appears to have become the new source of some Grizzlies fans angst, did not have an assist in 14 minutes of play.

If Memphis hopes to win games without Marc Gasol, they must get more bench production. The Warriors bench bigs, Marreese Speights and Jermaine O'Neal, combined for 14 points and 12 rebounds off the bench last night, while Draymond Green snagged 8 rebounds himself and Kent Bazemore scored 12 points. Jon Leuer and Ed Davis especially will have to be strong in the post against Speights and O'Neal, forcing them outside the paint and making them deal with Leuer's spacing ability and Davis' athleticism on the offensive end.

The bench will have to be more effective if the Grizzlies hope to defeat the Warriors.

Pondexter and Miller will have to start hitting threes more consistently, and Jerryd Bayless will have to create for both himself and others in order to keep pace while the starters get much needed rest. Defensively, open shots cannot be given up on the perimeter against a Warriors team that loves to "let it fly." Stick your man, honor your rotations and force Golden State to beat you inside the perimeter.

This game will be another close contest, more similar to the second game in Golden State than the first game in the Grindhouse. Mike Conley will continue his steady play, forcing Steph Curry to exert energy on his dribble penetration and off of picks and screens. The key will be big minutes from Tayshaun Prince against less experienced and shorter limbed Warrior wings, Jerryd Bayless' aggression scoring the basketball and Zach Randolph controlling the game offensively by getting Warrior bigs in foul trouble.