With several key players still sitting with injuries, Memphis will need better production from the guard position to remain competitive for four quarters.

Jerryd Bayless continues his assault on the interior walls of my blood vessels with his bizarrely inconsistent shooting this season. Before I continue my own barrage of analysis, let me say that the Grizzlies' slaughtering by the Warriors over the weekend can't be pinned solely on Bayless, as Memphis received a total of 5 made shots on 29 attempts from the guard position that evening.

But back to Bayless, what in the eff dude? He's shooting a full 10% lower than his career FG percentage, and his abysmal 22.5% from three is good enough for 2nd-worst on the roster (just stop taking them Tayshaun). Tony Allen is not only shooting the three better than Bayless; TA only has (4) fewer 3-point makes on the season (5 to 9)!

And JB's shooting woes are spread out consistently over the schedule, logging a total of (10) games where he's shot 30% or worse from the field, including (3) games where he put up a complete goose egg for the night. 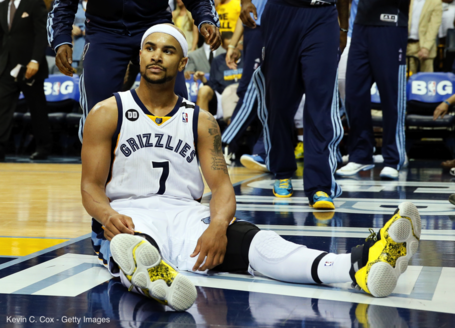 To add to the mystery, Bayless is shooting above his career average from the free throw line (83.3%). His shooting mechanics haven't devolved and he's been healthy all year. It's frustrating for everyone involved to say the least.

JB's disappointing shooting performance is especially pertinent tonight as he goes up against a shooting guard whose season is the exact antithesis of Bayless'. Despite the 6-14 record, Arron Afflalo is hotter than haute couture to start his season for the Magic.

With J.J. Redick now in Los Angeles, Afflalo is attempting and making more shots than ever before, shooting 48.3% from the floor and literally doubling the 3PT% of Bayless with a cosmic-grade 44.3% made from long distance. I'm sure AA is bound to start cooling off eventually, but it's tough to say that trend begins tonight against the defense of Jerryd Bayless.

Jerryd plays well when he's angry, so I hope this Grind Prophecy has thoroughly pissed him off for tonight.

The Grindmaster from last game (vs. Warriors) was split between ZBo, Miller and Leuer