How the Grizzlies Shut Down the Mavericks Offense

A look at several ways the Grizzlies defense contained the Mavericks offense in the 2nd half including their franchise-low 5 points allowed in the second quarter.

Share All sharing options for: How the Grizzlies Shut Down the Mavericks Offense

That's the number of points the Dallas Mavericks scored in the third quarter. And it wasn't because they're inept at offense. It's because the best defense in the league decided to impose their will.

Slowing Down The Frontcourt

Between Chris Kaman, Dirk Nowitzki and Shawn Marion the trio combined for 28 points at the half on 14-20 shooting. in the third quarter they forced everyone else to shoot the ball. While the trio only took 4 combined shots the rest of the team took 11. And only made two.

The Defense on Dirk Nowitzki:

While Dirk certainly hasn't been his normal self this season, but he's beginning to catch his stride. His last eight games he's averaging 19.3 points, 9.3 rebounds on 48 percent shooting. He's also shooting 60 percent from behind the arc. And he was one of the main troubles in the first half. Dirk went 4-6 during that span. In the third quarter he only took two shots. The entire second half he went 0-5 and it had a lot to do with how he was played.

Look at the distance between himself and the defender in the first half: 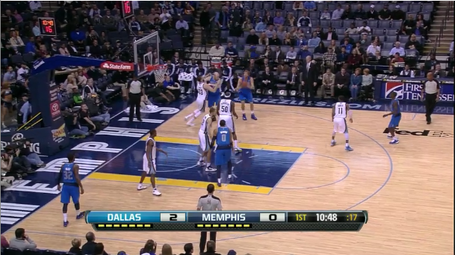 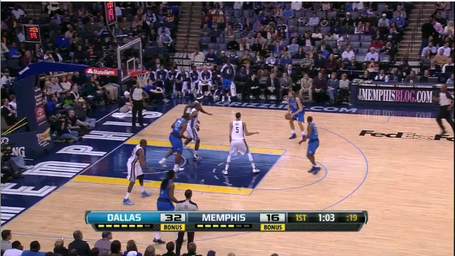 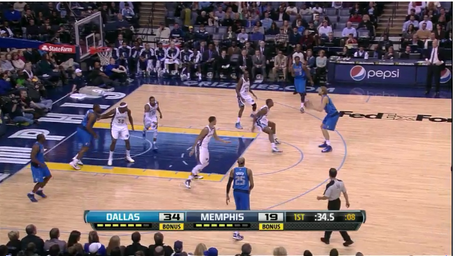 Now look at the distance between he and the defender in the second half: 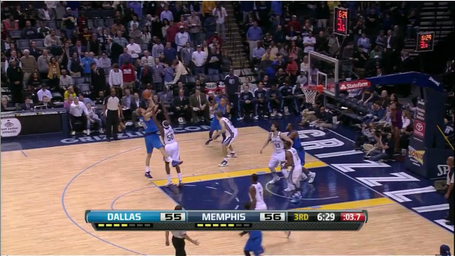 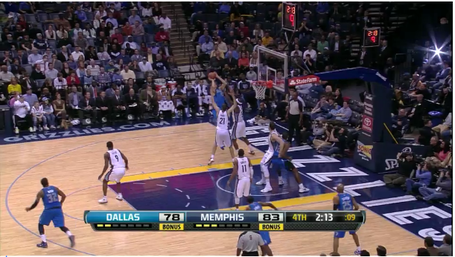 Usually when Memphis steps up the defensive intensity they're led by Mike Conley, Tony Allen or Marc Gasol, but this one was solely on Zach Randolph. It's not often you see him imposing his will on the other team defensively, but he took Dirk out of his game. This is mostly a surprise as he struggles to guard stretch-4's due to his slow foot speed, but he used his strength to his advantage to not allow Dirk to get comfortable the entire second half.

Of all the players on the Dallas Mavericks roster, the pecking order of who you don't want shooting the ball probably goes Dirk Nowitzki -> O.J. Mayo -> Vince Carter -> Darren Collison -> Shawn Marion -> .... -> Rick Carlisle -> Mike James. On the entire Mavericks roster only one player is shooting a worst field goal percentage than Mike James is: Anthony Morrow, and he's only taken two shots in the short moments of this Mavericks tenure. He's shooting 29 percent on the season. He lead the team in shooting in the second half going 2/8. Keeping the ball in his hands and out of the hands of their primary scorers proved to be successful.

The shot charts say it all: 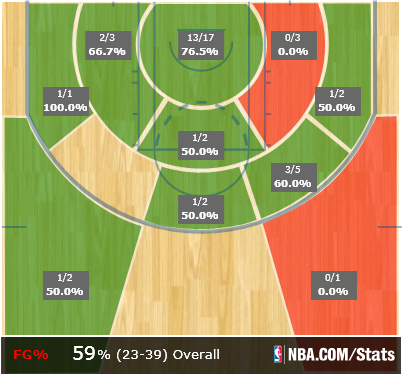 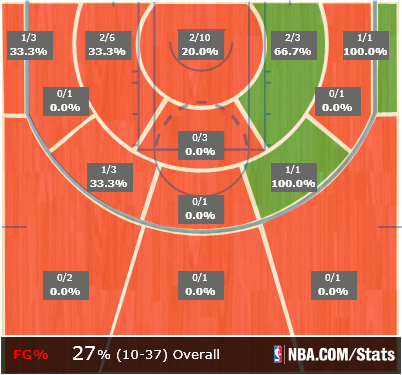 This was the product of Dallas settling for jumpshots and Memphis' bigs stepping up on the pick'n'roll to prevent the guard from deciding what they wanted to do.

Obviously the biggest component of the Memphis defensive lockdown was Dallas missing multiple shots that they were draining in the first quarter, but the change in the defensive scheme ultimately led the Grizzlies to a victory. Hopefully they bring this same second half defense with them to Miami when they take on the defending champs.