Game Rewind: A Look at How Lionel Hollins Plays the Cards and Beats OKC

Share All sharing options for: Game Rewind: A Look at How Lionel Hollins Plays the Cards and Beats OKC

"They don't have anyone that can now create their own shot on the perimeter now that Rudy Gay is gone. Who's going to shoot the last shot if need be?" - Anonymous

I must admit. Since the trade, I've wondered the same thing. A lot of Memphis' crunch time buckets came from Rudy Gay isolation plays instead of running set plays. You can't really blame Lionel Hollins for the approach. Gay's an above average closer based on the eye test and he's come up big multiple times.

But forced to play the free throw game for the rest of the quarter and no Gay to give the ball and tell everyone else to get out of the way, Hollins played his cards perfectly with little help from a Russell Westbrook missed free-throw. It was simple. He -puts on sunglasses- went to Jerryd!

This caught me off guard along with everyone else watching. A Jerryd Bayless alley for a quick two? This play isn't made one month ago. Not only did Hollins go for the ultimate quick-two, but he did it while only taking .5 seconds off the clock.

To get Jerryd Bayless open for the pop, Hollins threw a nice little wrinkle into the play regarding Quincy Pondexter. 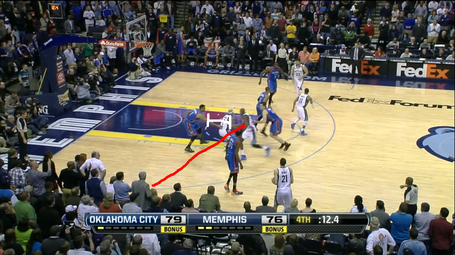 Thabo Sefolosha expects a screen from Pondexter that will allow Jerryd Bayless to get open at the top. Instead Pondexter slips and runs to the corner as a decoy for the three-pointer. Ultimately the play keeps Thabo, who's one of the smartest perimeter defenders in the league, off track for .1 one second that leads to Bayless' alley.

Hollins goes back to Bayless for another surprising move that results in 2 made free throws. Hollins drew up another quick play that wasted less than three seconds on the clock. And the way the Thunder defended this one may be the reason why Bayless gets open. Instead of staying with their man everyone switches after the screen. 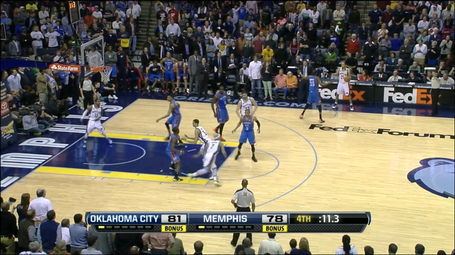 When Westbrook switches onto Bayless after the Austin Daye screen, he has his back turned to the oncoming Gasol screen which leaves Jerryd Bayless against a flat-footed Kendrick Perkins. A slightly late rotation from Sefolosha results in a foul that sends Jerryd to the line.

Also Westbrook having his back completely turned to Gasol instead of playing the ball and his man shows Russell's lack of basketball IQ. He'll catch the screen and have a better chance of fighting through it if he see's it coming.

This play was more "hero-ball" than a set play. Oklahoma City's defense cut off what looked to be the main option: Jerryd Bayless to the corner. Instead Daye gets the ball up top and hands it off to Bayless to sink the final shot. Most importantly, Daye screen's Thabo on the hand-off pairing up Bayless with a smaller defender in Reggie Jackson. Even more important than the size factor is Jackson's inexperience on defense. I don't see Sefolosha falling for Bayless' pump fake. And if he does his height makes up enough space for it not to even matter. Bayless' gets away with a travel, but ultimately hit's the game-tying jumper.

Seven points in 3 plays (1-1 3P, 4-4 FT) in the last 12 seconds of regulation is perfect. Hollins flat out out-coached Scott Brooks in the game. In a much needed victory after dropping 2 of their last three, the Grizzlies have shown that they can play with the top dogs. Also when is it time to start considering Lionel Hollins for Coach of the Year?