With reality setting in, the Grizzlies try to regain confidence by maintaining competence.

Share All sharing options for: Grind Prophecies: Owning the 5-Seed

After personally declaring last weekend's loss to the Hornets as the biggest let down of the year, I sat through another Grizzlies game where I kept saying to myself, "any minute now, we're going on a run." As we all know, that never came to pass, and I spent the better part of that evening moaning to a friend about my lowered expectations.

Please do not mistake my lowering of expectations to mean I think the season is over. I just cannot envision the team as currently constructed, with Gasol on the bench, to progress any further in the standings. Now, if Zach Randolph can give us solid production, production enough to beat mediocre and poor teams, we could finish the season 9-3 (best case scenario). Unfortunately, it is also very possible that the Nuggets finish their season with a record of 9-1 making it impossible for Memphis to gain any ground in the standings.

I rarely give my own predictions for Grind Prophecies but this is how I see the last 10-12 games going for the 3-5 seeded teams:

Those predictions were made with realistic expectations from each team's perspective taking into account location, date and current situation in season. Even with a slight bias, the Grizzlies fall two games short of the four-seed. The harsh truth is without Marc Gasol, we are not a playoff contender. I know it. We all know it. Marc and the Grizzlies team knows it.

Now I am definitely not a medical expert but I would wager, Gasol will return toward the end of the season completely due to his competitiveness. His injury may be worse than Chris Bosh's 2012 playoff injury in which he sat out two-weeks, but come on, he's no Chris Bosh. If he is willing to push through the pain, the Grizzlies could use his services this year and put him on recovery in the offseason.

Furthermore, there is not much for Memphis to do but ride the waves of the closing weeks of the season and patiently wait for Gasol to return for the playoffs. I think the most important thing for the team to focus on is maintaining a positive team psyche. Win games you are supposed to win. Fight against mediocre teams. Compete against playoff contenders. Do NOT get blown out. If the Grizzlies can maintain a competitive environment around the locker room, when Gasol returns, the team will have the battle-tested mentality heading into the playoffs. 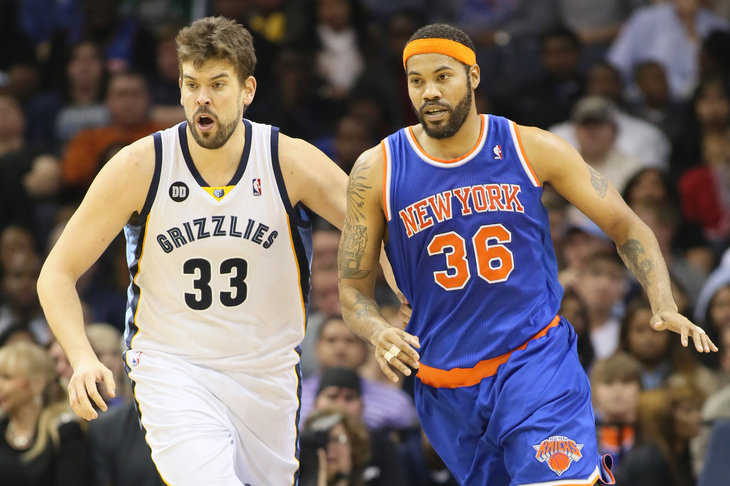 The Grizzlies need a win, but to get it, they’re going to have to do it at MSG.

Tonight the Grizzlies play the New York Knicks and will see the most interesting lineup matchups of the year. Last night the Knicks started Pablo Prigioni, Raymond Felton, Iman Shumpert, Carmelo Anthony and Kenyon Martin. If we start our normal lineup, the Knicks have some serious matchup problems (Prince's length, DA's athleticism, Randolph's big body). Dominating the boards and protecting the perimeter will predicate a win tonight.

Time to see what you guys think. For more on tonight's game, check out today's game preview by our fearless leader Kevin Lipe.