Grind Prophecies: This Just Got Real

Taking the game you have all come to love and made it...wait for it...legendary. Welcome to Grind Prophecies with a kick.

Share All sharing options for: Grind Prophecies: This Just Got Real

Welcome to a very exciting edition of Grind Prophecies. The staff of GBB and SB Nation has been working diligently over the past two weeks in preparation for this very day and now, here it is. Many site members have pondered aloud, "What is this fantastical announcement," and "I’m only interested if it involves chickens," but rest assured poultry-fans, we have something that defies all expectations. A proclamation so great, it rivals the announcement of new episodes of VH1’s T.I. and Tiny: The Family Hustle. A surprise so great, you will think Michelle Obama’s unexpected appearance on the Oscars was a planned PR move to use her husband’s political office to boost her own celebrity, falling farther from the high esteem of her own position with yet another move of self-promotion. Wonder who she was wearing!?

So what is it, you ask? We have taken the fun, exciting version of Grind Prophecies and added…PRIZES!!!! You heard it correctly: prizes; Memphis Grizzlies jerseys to be exact.

For each month remaining in the 2012-13 season, GBB will hold a month-long competition through Grind Prophecies, with the member with the highest point total at the end of each month being declared the winner. The game is still the same and the categories have not changed. If you would like to see a deeper analysis of each category, feel free to check out the introduction post.

However, due to legal reasons and to maintain the integrity of the game, there will be a few modifications including a stricter scoring structure. For instance, the User’s Choice category, by far my favorite category, will no longer count toward your total points. The category was deemed "too ambiguous." I still encourage you to participate in the category as, I know for me, it has added another level of excitement to watching the game; most of your suggestions remain in my mind as I watch the game, making it more fun to stat track.

For those of you who participated in the Orlando Magic GP last week, I hope you understand now why we had to remove the official scoring from that game. Unlike the Orlando game, I will attempt to have each Grind Prophecies posted before 1 p.m. CST, the day of each game to ensure a balanced playing field. Each participant will have until the game’s official start time to submit your predictions. Those predictions can be submitted in the comment section of the GP post; duplicate submissions will be eradicated from point consideration.

GBB has official competition rules and terms of agreement documentation that will be linked in each GP post from here on out. Feel free to check it out if you would like the legal language of the competition. A scoreboard will be updated the day after each game (or on Monday after weekend games) and can be accessed from our public Google Drive page. If you have not participated, please join us as you are not too far off the pace (we only have 2 official games on record). If you have any questions, please feel free to contact either myself or Kevin, via email, or just leave a comment.

I look forward to moderating Grind Prophecies, seeing some swami-inspired predictions and handing out a few awards. For the highest point total in the month of March the winner will receive this wonderful team jersey from The Grindmaster himself, Tony Allen. 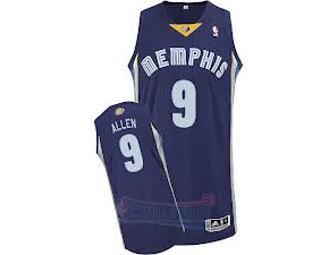 Tonight’s match-up against the Cleveland Cavaliers has become an important game for the ole Grizz team. With a Clippers loss and Nuggets win last night, Memphis is sandwiched between two extremely different scenarios. The first is very optimistic as Marc Gasol and the Memphis Grizzlies are now 1.5 games behind the Clippers for the 3rd seed in the Western Conference playoffs. On the flip side, the Denver Nuggets have surged to a game behind the Grizzlies for the 4-seed. With a difficult West Coast trip looming, the Grizzlies need to stockpile wins against lesser teams. It also would not hurt the PR cause to have a convincing win against former Grizzlies, Wayne Ellington and Marreese Speights, who have increased their production in the past few weeks. For more on tonight’s game check out the game preview later on today. For now, let’s make some predictions.