With Darrell Arthur struggling for majority of the second half of the season, I attempt to find the cause(s) of his cold spell.

Share All sharing options for: What's Wrong With Darrell Arthur?

After missing the 2011-12 season due to a torn ACL, fans have expected Arthur to return to his previous form. That form was leading the bench as the sixth man bringing energy and emotion off the pine. And for 30 or so games, Darrell did that. Of course, this could just be a case of Arthur not meeting the fans expectations after such a lively performance during the 2011 playoffs. Everyone knows it take at least two years to completely return from an ACL injury, but fast forward to the end of this season and watching Arthur play has seriously become a pain for everyone's eyes.

In his last 10 games, Darrell Arthur is averaging 3.9 points, 2.2 rebounds on 43 percent shooting. He also has a Net Rating of -20.1 over that same stretch. Luckily Lionel Hollins has noticed his decline, playing him 13 minutes per game in his last 18 games, but for some reason it feels as if Hollins will stick to "what he knows" and give Arthur his normal minutes come playoff time.

The shot charts show minimal change between the two seasons: 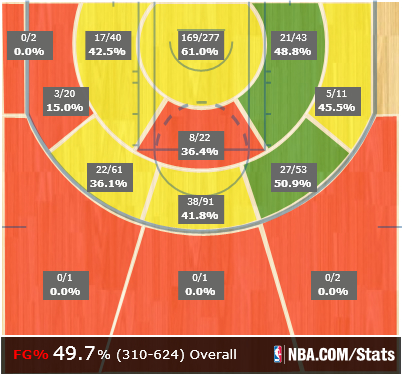 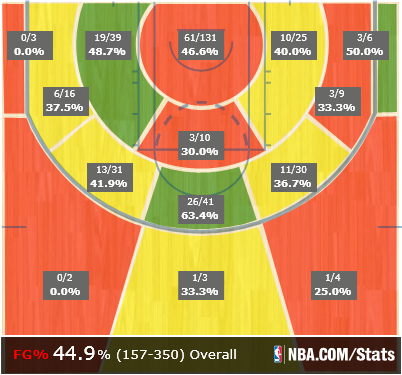 His bread and butter shot, the mid-range jumper hasn't dropped much. According the NBA.com/Stats, he's shooting 45.5 percent from mid-range, up four percent from the 2010-11 season. The biggest drops come from within the paint.

While the numbers are lower due to a steady decline in playing time and missing games due to injury, he's failing to be aggressive in the paint. His lack of aggresiveness and explosiveness may be due to the ACL deal and the sore back he's dealt with late within the season. We've seen what a bad back does to big men. Dwight Howard is the perfect example for that. Yet, Arthur's injury isn't nearly the same as Howards, but it gives some perspective on DA's situation.

Yet his beginning of the season stretch makes it hard to pin-point Arthur's actual problem. In the first 30 games of the season, Arthur hit the 10+ points benchmark eight times including a 20 point, 9 rebound performance versus the Los Angeles Lakers. He then eclipsed the 10+ mark three times over the last 31 games including a solid performance in the season-ending victory over the Utah Jazz.

Another issue could be something that can't be found in the stat sheet: sheer confidence. It's difficult for most players to adjust to not having the same role they once had. Playing four less minutes a game than he did in 2011 means he's dealing with a shorter leash and we know how Lionel Hollins feels about players making mistakes. Look at Ed Davis for instance. In his first games as a Grizzly, he struggled. It affected him a bit, but as his confidence grew his play got better. We've seen confidence play a positive role during Wayne Ellington's time as a Grizzly, Mike Conley's play since the Rudy Gay trade. Unfortunately we've seen it's negativeness in the likes of Quincy Pondexter, who's also a key peice that's struggling.

With the Clippers series around the corner, it's perfectly time for Darrell Arthur to remember what kind of player he is. In two games against this team, Arthur has been average: 19.6 mpg, 7.0 pts on 40 percent and 3.5 rebounds. This Grizzlies bench has to match everything the Clippers bench throws at them and that starts at what Darrell Arthur brings to the table. Saturday will be time for him to step up or step out of the way and let the others run the show. Time can only tell.

Lemme us know how you feel about the Darrell Arthur situation in the poll and throughout comments.