While Zach Randolph and Marc Gasol being the primary focus, Lionel Hollins have to find a way to get Prince going on offense against the Clippers and the best way is as the screen man in pick-and-roll situations.

Share All sharing options for: Prince, the Unlikely Screen Man?

Since being traded to the Memphis Grizzlies in late January for Rudy Gay, Tayshaun Prince has fit in perfectly for this squad. He's fitting in enough to where, at times, you forget he's there.

Considering how this team runs, he's the fifth scoring option behind Marc Gasol, Zach Randolph, Jerryd Bayless and Mike Conley. He knows when and when not to take shots and rarely ever forces the issue offensively. The numbers don't back up his shooting: averaging 8.8 points on 42 percent shooting since arriving to Memphis. This isn't impressive to say the least, but his overall play makes and cohesion with starting lineup makes up for all of that.

Entering the playoffs, it's time to involve Prince within the offense more. There's no definite that the bench will score consistently every night in this series, so Memphis has got to get all the points from their starters. In two games played against the Los Angeles Clippers as a Grizzly, Prince has been phenomenal averaging 15.5 points on 56 percent shooting and while hitting at the 75 percent clip from behind the arch. With all the focus on the Big 3 (Conley, Gasol, Randolph), the opportunities will be there and what way to get Prince the ball than going to Memphis' bread and butter: the pick-and roll.

The Tradition Pick and Roll/Pop

Now before you yell "this a post-up team, Z-Bo, we in the mud", realize that most of the team's post-up attempts come out of pick-and-roll situations. With Prince's skill-set, playing the role of a stretch 4 could generate great things for Memphis.

Here's an example against the Dallas Mavericks..

You have to respect Prince as the roll-man. Like I mentioned before, when he's running the 1-3 screen he's acting as a stretch 4 on the floor. He's shooting 40 percent from mid-range on the season and is likely to burn you from 10-15 feet every time. 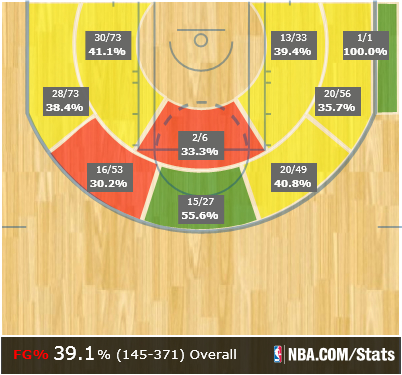 In the NBA defenders catch on things once the'yre done multiple times. Once defenders know it's coming they begin to cheat on them by stepping up which allows Prince to use...

Sometimes the best part about setting screens is, well, not actually setting screens. Defenders, naturally out of habit, see the screen coming and prepare for it, then allow this to happen: 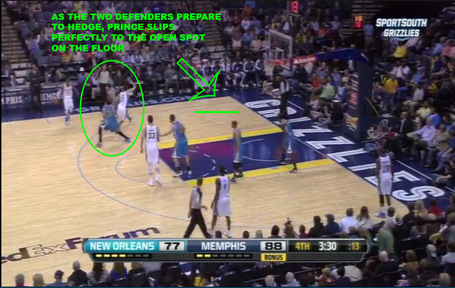 Obviously if Vasquez doesn't attempt to get over the screen and falls back to defend Prince this type of action can't happen. Unfortunately for the Los Angeles Clippers, if the point guard (whom none are the size of the 6'6 Greivis Vasquez, it'll lead to an extremely difficult match-up to deal with...

Pick and roll plays that involve switching usually lead to a mismatch. Either the big is too slow to guard the perimeter player or the guard is too small to guard the post. Going against Chris Paul and Eric Bledsoe, both who are just a tad over 6 feet, they're vulnerable against the 1-3 switch. Watch how the screen forces Jordan Crawford to guard Prince in the post:

If Bayless likes what he sees, then taking the big can work, but a smaller defender on the 6'9 Prince is a better option. Here's another way to get the ball into the post against a smaller player via the slip.

A play that, unfortunately, ended in a miss may not have been the first option to get Prince the ball. 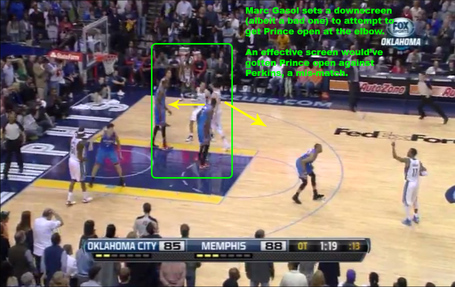 With option one, the Grizzlies go to a 1-3 screen that leads to option two. 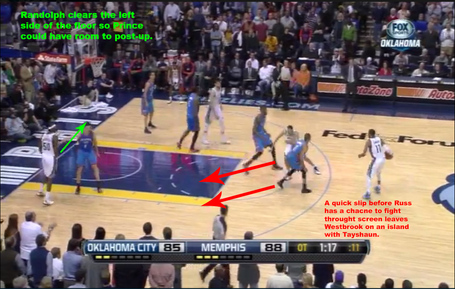 Running the same play over and over, defenses begin to pick up on what's going on. That's where team's add wrinkles to adjust to the given defense. Here is a short compilation of ways they get Prince open using a third player:

The one that should be used the most is the one featuring Darrell Arthur and Prince. A play that features three players has the ability to end in three different ways: 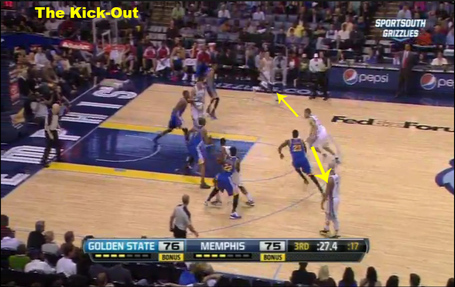 If Charles Jenkins (#22) drops to help prevent the roll by Darrell Arthur or the weak-side defender besides Marc Gasol steps in to defend Prince because of late rotations it opens things up for shooters Jerryd Bayless and Austin Daye. 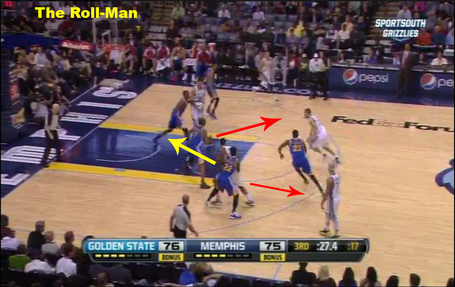 This one is simple. If Carl Landry steps up Prince dishes to Arthur for an easy two points. And if decides to step over on Arthur's roll it leaves Marc Gasol un-guarded on the right block.

3) Keeping It: the actual result is Prince keeping the ball. He could have pulled up after receiving the pass from Arthur's screen, but Draymond Green's closeout speed forced Prince to get closer to the basket for a more efficient shot. Spacing made things easier here also. Since Daye and Bayless can consistently hit that shot it leaves the lane completely open for Prince to attack.

Hopefully Memphis makes this a little "pet play". For such a stagnant offense, ball movement and pick and rolls are the perfect ways to keep the defense on its toes. Whether Memphis is asking Prince to pass, slip, post or hit the 15-footer he's more than capable at all of the aforementioned things. And that's all the reason why Hollins should make the 1-3 pick-and-roll one of his pet plays.