We've waited all season for this, and we've also dreaded it all season: a rematch of last year's first round series/slugfest/brawl between the Grizzlies and Clippers.

The Grizzlies are in Los Angeles tonight to play Chris Paul and Blake Griffin and Billy Crystal and the rest of the Clippers. Buffalo Braves was a much cooler name than "L.A. Clippers." Alas.

Here is a funny picture taken at the FedEx Forum in Memphis last year: 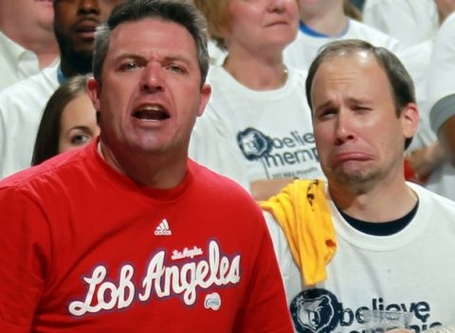 I'm too nervous to say much else about this one. We've known it was coming for a while, and we previewed the series pretty extensively. Now it's time to shut up and play basketball (or, in the Clippers' case, at least play basketball*).

Let's talk it out!

* Hey there, Clips Nation folks. That was a joke.

Special Playoff Note: There will be Clips fans in the thread tonight. It's the playoffs. Let's be nice to each other.

Personal attacks will not be tolerated. Don't say I didn't warn ya. Y'all play nice.

Will the Grizzlies win tonight?

This poll is closed