If the San Antonio Spurs are going to shoot 48 percent from three this entire series you can save us all the time and fast forward to the NBA Finals.

It would be nice of me if I said the Memphis Grizzlies rotation defense was bad. It was the worst defense played by this bunch in the playoffs and the worst we've probably seen from this core since they began making the playoffs in 2011. Coming into a series against a well-oiled machine in the Spurs offense, discipline on the defensive end will be key.

And that discipline, it was nowhere to be found Sunday whether there was help one pass away or helping too much leaving a man (Matt Bonner) open on the pick-and-pop. These shooters aren't Reggie Jackson, Derek Fisher, Thabo Sefolosha and Kevin Martin. Here are the Spurs primary shooting numbers in the regular season (with spot-up numbers in parenthesis via Synergy):

All-together the crew went 14-29 from three-point land (11-19 in spot-up situations). Knowing how good the shooters that surround Tony Parker and Tim Duncan are the Grizzlies defenders still decided to play defense like this: 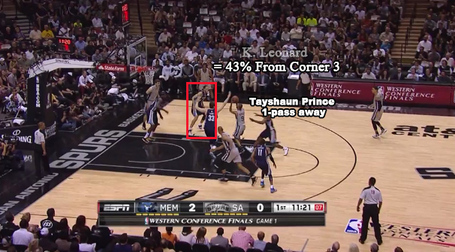 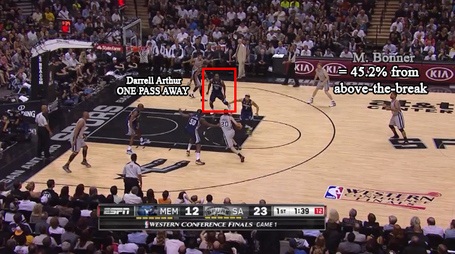 And can someone explain why Tony Allen is helping so hard on Marc Gasol versus Duncan here:

Tony's knack for wanting to cheat off was shown a lot in Game 1, but this instance is highly unnecessary. Marc's THE Defensive Player of the Year. He can handle Duncan one-on-one (it should be what the Grizzlies want anyway). If Duncan's going to beat you then let him, but don't let Green get an open spot-up three.

Here's a play where Tayshaun Prince tries to cheat to help on Tony Parker. It leads to a Leonard corner 3: 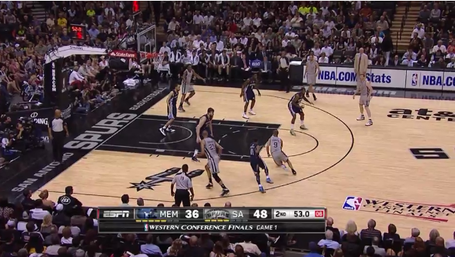 Reason 276 why Marc Gasol is Defensive Player of the Year: He's a master a defending the pick and roll. There's no reason why he can't handle this situation without assistance from Tayshaun. If so he should send his award back to the committee. Either he slides over to cut of Parker's path to the line while Conley slides in front of Duncan or the two players stick to their man. There's NO reason for Tayshaun to cheat over. This play ends in two ways if Prince sticks to his man: a Parker/Duncan make or a Parker/Duncan miss. Considering how the game turned out that's a much better option over a Leonard corner three.

Lack of communication in the screen-and-roll was a huge problem also. Look at how Bayless and Arthur defend Gary Neal and Matt Bonner:

At the moment of the screen, Bayless and Arthur have to figure out who's gonna do what. Arthur has to either hedge Neal on the pick and get back to Bonner or Bayless sits back on Bonner while Arthur checks Neal. Part of this is on coaching. Lionel Hollins has to dictate how this team defends the pick-and-pop situation because Bonner isn't going to roll; that's not his game.

Bad decision-making and lack of a proper adjustments strike again in the fast-break. 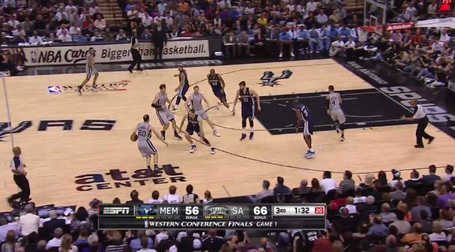 As Manu gets set a double-screen by Splitter and Bonner the Griz defenders should know how to defend this: Splitter's the designated roll-man and Bonner's the designated popper. But after the screen both Prince and Arthur attack Manu leaving Bonner WIDE open as Gasol dives down to roll with Splitter: 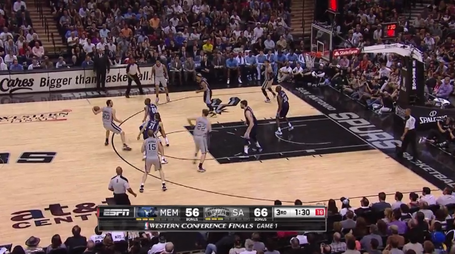 A simple switch fixes this. Darrell Arthur is a good enough pick and roll defender to keep Manu at bay and Bonner's practically a non-threat when it comes to putting the ball on the floor. 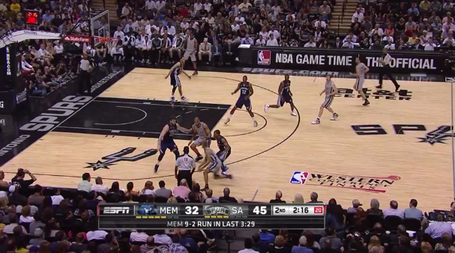 Coming down the court off a rebound, Ed Davis isn't paying Matt Bonner any attention. His eye is on the Parker/Duncan pick-and-roll. Skip up a few frames and Davis' over-helping on Tim Duncan leaves the Red Mamba completely open: 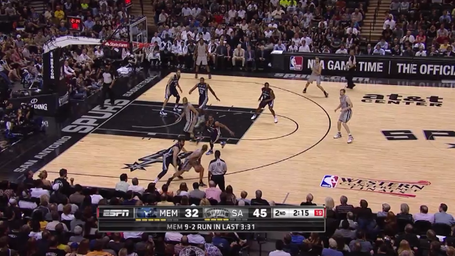 At the angle Tony Parker is in it would be extremely difficult to get Duncan a pin-point pass while on the move whether it's just Conley rolling with him or Conley with Ed Davis in the shadows. The result is an easy three by Bonner.

Despite everything that went wrong in the rotation/help defense, this is something that is completely<. it would been nice to see an in-game adjustment especially after getting the deficit down six points in third quarter. based off of two previous game hollins has solid at adjusting instead going by feel but these players are have lock-in if they want attempt steal one san antonio before heading back home.>