After a three week break, you finally have toilet reading again brought to you right on your smartphone.

Welcome back, folks, to the fifth edition of this week in links. By now, you all know what this is, so let's dive right in.

Rob Mahoney - SI.com: Don't be fooled by the Grizzlies Game 2 comeback: Mahoney takes a look back at Game 2, and the gist of the article is that people are overhyping the Grizzlies moral victory. While this won't be popular among Grizzlies fans, he makes some excellent points in his article, and it is a great writeup overall. He uses video to breakdown the Grizzlies uncharacteristic defensive blunders as well, which is fascinating.

Ananth Pandian - Hardwood Paroxysm: Zach Randolph Rap Anthems: This is just a fan piece that changes the pace in an attempt to take your mind off of the grind of the NBA Playoffs so to speak. Enjoy.

Matthew Cianfrone - Hickory-High: The Twittersphere Breaks Down Game 2: Cianfrone contributes to Hickory-High, but he used Storify to compile a list of tweets that occurred during Game 2 of the Grizzlies-Spurs series. It's really neat to take a look at what other people think about the Grizzlies and get their unique take on the way the Grizzlies play the game.

To take a brief hiatus from your reading, check out this AWESOME picture below of this Grizzlies fan. That takes some serious dedication. (Photo by Joe Murphy/NBAE via Getty Images) 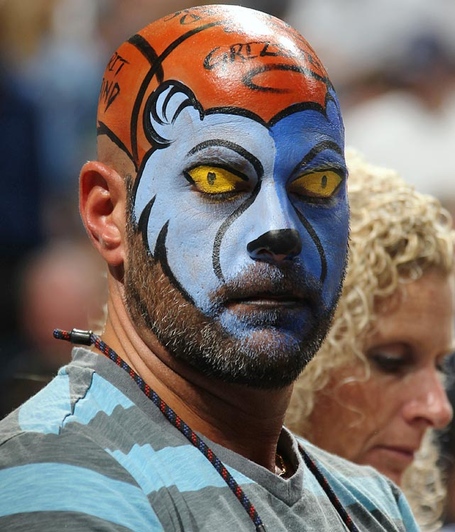 Kevin Helliker, Chris Herring, and Stu Woo - The Wall Street Journal: Analyzing The Grizzlies Left-Handed Advantage: These men talked to Frank Lawler, a Physician, who has studied the issue and has drawn some interesting conclusions from his research about the significance of having a roster full of lefties in basketball.

Chris Herrington - Memphis Flyer: The Grizz Glossary: Kevin already tweeted out this link, but in case you missed it, you should give it a read. It is great writing, and thus a fun read. Plus, I don't think anybody can really get enough Grizzlies terminology.

Lee Jenkins - Sports Illustrated: Hangin' With The Grizz: Jenkins followed the Grizzlies around for a week and wrote about it. The results are amazing.

Zach Lowe - Grantland: NBA Draft Lottery Observations: Lowe was one of the few media members actually at the lottery allowed in the room it was filmed in, so he was able to write about the event from a unique perspective which is always cool.

Royce Young - Daily Thunder: Kevin Durant Donated $1 Million To Tornado Relief Efforts: This was by far the coolest story of the week after the tornadoes swept through the state of Oklahoma. As if we needed any more evidence to support the fact that Durant is an outstanding person off the court as well as on, he proves it to us again. He did not even give a press release when he donated the money. He is a rare breed of athlete.

Andrew Sharp - Grantland: Kawhi Leonard Conundrum: Sharp, a Wizards fan, revisits recent NBA Drafts and displays pure sadness over the Wizards not drafting Leonard when they had the chance. If you love draft retrospectives like me, this is for you.

Trey Kerby - The Basketball Jones: David West Falls Asleep in Press Conference: You can watch the whole press conference if you want, but the situation with West is near the beginning. I have watched it ten times, and I laugh out loud every time.

If you have any links to add, feel free to post them in the comments! Go Grizz!