While You Were Grinding: Off Topic Edition

This week, all but two NBA teams are off, so we'll spend the article talking about The Office, terrible CD ideas, and the wonderful artwork of Fernando Tatis.

Share All sharing options for: While You Were Grinding: Off Topic Edition

With many moons set to pass between Game 2 and Game 3, this seemed like the perfect opportunity to do a very special playoff edition of ‘While You Were Grinding.' Due to the fact that the season is still kind of going on, and the offseason hasn't technically started yet, this will also be more of an ‘Off Topic' edition. And you know what? That's a good thing. In the midst of a highly stressful playoff run, sometimes it's nice to just take your mind off basketball.

The postseason offers highly entertaining basketball, and the chance to build up the archives of your sports memories database, but it can also be intensely annoying, especially at this stage. Throughout the season, we'll see fans of opposing teams sTroll their way over here and talk about how they know for a fact they have a better team than we do, but best of luck anyways. Occasionally they're right, and occasionally they're wrong, but they are always kind of annoying. In the playoffs, it gets worse, because you play the same team multiple times over the span of a few weeks, and with every win and loss, the arguments get more ridiculous and aggravating. "Seriously? You think the team you cheer for is better than the team I cheer for? Let me tell you why you're an idiot who knows nothing about basketball..." That's not to say all opposing fans aren't level headed, or even that all Grizzlies fans are. Need I remind anyone of the guy who said Austin Daye was the second coming of Larry Bird? But it's just all very tiring, even to a Grizzlies fan who said Spurs in 5.[1]

You also get bombarded with media attention that a team like the Grizzlies just doesn't normally get. But I will say this; I do enjoy it, even the negative stuff, which is right up our ally. My favorite thing is how most media outlets have called Tony Allen's fall from the Manu Ginobli foul a "flop." Now let me clarify, did Tony sell the call by holding his head even though he didn't hit it? Absolutely, and undeniably. But there's a big difference between selling the contact and flopping. It's pretty tough to "flop" when you're dragged to the ground. Plus, we all know Tony pretty well by now, and it honestly isn't out of the realm of possibility that he just didn't know what was hurting yet. Tony has a screw loose, and a few wires crossed, and that's why we love him, but it could very well have caused him to freak out a bit here. Again, did he clearly hold a part of his body that he didn't hit? Yes, he did, but I don't think that's a reason to award him the United States prize for achievements in newspaper and online journalism, literature, and musical composition.[2] Here's a look at what you might have missed while you were grinding.

Gif of the Week:

After a disappointing first round exit, and a big pile of alleged locker room turmoil, The Clippers have decided not to bring back head coach Vinny Del Negro. They'll be linked to everyone on the market before they finally sign someone, including our very own Lionel Hollins. One non-coach they are already linked to is David West, a player they allegedly are going to make a strong push for in the offseason. It would make a lot of sense, and I'm sure Chris Paul would love playing with West again, but I'm not sure West would want to come off the bench, and unless they are going to play him at the 3 (which isn't too crazy) he would have to.

If you missed out on the NBA Draft Lottery, the Cavalier's walked away big winners after securing the number one overall pick for the second time in three years. As a not too secret Cavs enthusiast, I love this so much. Conventional wisdom says they'll be taking Nerlens Noel with the first pick, and that would give them pretty great size to go with their high scoring backcourt. If Kyrie Irving can stay healthy, and I realize at this point that's a pretty big if, but if he can, the Cavs are going to be a playoff team next year. Mark it down. The Wizards also got a boost as they vaulted into the third spot in this years draft. Washington, who much like Cleveland, has their backcourt already set, could be in a position to add Otto Porter. This might be a historically weak draft, but I think these two teams are in a position to get significantly better. Will they become instant title contenders? No. But they will have really good pieces to build a championship team around, which is the whole point of the lottery in the first place. Now if we could just get it to work for Charlotte...Speaking of the Bobcats, they've begun the process of taking over the Hornets name now that New Orleans is officially #PelicanNation.[3] Word on the street is, they are looking to adopt the old color scheme as well, which would make me about as happy as Muggsy Bogues and Larry Johnson combined.

The Mavericks have made it quite clear that they are going to go after Dwight Howard and/or Chris Paul, and they are going to go after them hard, and they've even made it known they are shopping their first round draft pick to help clear space to do so. As much as I'd hate to see either one of those guys in our division, Paul would be an incredible fit for that system, and not just because he's the only one of those two that isn't a total headcase. A lot of people think Rick Carlisle could contain Dwight and maybe even mature him a bit, but that's about like me going on a lovely picnic lunch with the little redheaded girl: it just ain't happening. Plus, if your Carlisle and Dirk, don't you just want to go ahead and take the guy who you know is a winner, and wants to win more than anything else?

Remember growing up, sitting in your computer skills class, and waiting until the teacher passed so you could get on ‘Paint' and mess around? Seems like an eternity ago, doesn't it? Well don't look now, but it's making a comeback in the form of former major league baseball player Fernado Tatis. Tatis, who's always been a bit behind the curve, has recently discovered paint, and he just keeps cranking out the masterpieces.

As much as I hate that word, I'm going to be flying Swag Airlines exclusively from here on out.

The best thing about this is that it appears as if the Wendy's in Heaven is in the middle of the water, and Fernando has found a car that can float through it. Super impressive.

My favorite is one he drew for Jose Canseco of the former slugger boxing Shaquille O'Neal. 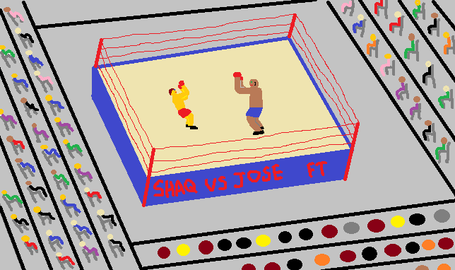 Sure he captioned it, but he didn't need to. Clearly we all knew what was going on there. Some people remember Tatis for once hitting two grand slams in the same inning, but luckily for him, he's reinventing himself as the master of Microsoft Paint, and for that, we thank him.

One other person who deserves a great deal of thanks is Greg Daniels, executive producer for The Office. The workplace comedy ended its run last week. It's really tough to get finales right, but The Office nailed every single thing. The way they wrapped up the stories for all the minor characters, then the major characters, all while making you laugh and cry in the same breath was truly phenomenal. Even the brief Michael Scott cameo was perfect. If you've yet to see it, get up right now, before you finish your work, before you do anything else, before you take another breath in this life, go home and watch it. I've seen it three times already, and it gets better with each viewing.

Earlier this week, Disney Channel made some headlines when they decided to pull an episode of a show called Jessie because it featured two jokes about a kid with a gluten allergy. As a semi-quasi professional comedian, I find this to be completely ridiculous. Look, I don't want to downplay people who have or are affected by celiac disease, I have a friend name Tony whose mother was very sick a few years back because of it, but jokes are jokes. When did we all forget how to laugh at ourselves? What's next? No more potty humor because some people are self conscious about the way their farts smell? Is that what its all coming too? Disney Channel should worry less about mildly offensive gluten-free jokes, and apologize for their real crimes, Dog with a Blog.

If that doesn't make you sick to your stomach, perhaps you'd be better off attending Houston Astros' games where a vendor was recently fired because he took his snow cones with him into the bathroom. I'm not sure how the meeting with his manager went down after that incident, but I like to think he said, "Listen, I don't know what the big deal is, I mean, I washed my hands and everything!" And I shouldn't knock him, because he very well may have, but even washing your hands isn't enough when you come out of a men's restroom trying to sell yellow snow cones. It's just not.

And finally, if you were looking for a reason to give up, Paris Hitlon has signed onto Lil Wayne's record label and will be putting out an album, an actual music album, later this summer. My brain can't really fathom this. Paris Hilton is going to put out an album, and she's doing it really quick too! For those of you who are wondering, my birthday is this summer, and I just know that someone will want to purchase this for me as a gag gift,[4] so here's a list of five other albums I'd rather have before this one.

Let's be honest, if Wolf Blitzer dropped a CD filled with nothing but his Roseanne Barr impersonations, it would be number one on iTunes by the end of the week. I'll apologize now for the inevitable nightmares you will all have featuring Liam Neeson repeating the word "moist" over and over again with different inflections in his voice.

Feel free to make this an ‘Off Day Week Off Topic Thread' and comment on whatever it is your heart desires, and as always, Go Grizz.

[1] That's right. Not only did I call one fan base annoying, but I told my own I picked against our team. If you are curious as to what that sound is, it's the sound of my stock plummeting.

[2] This is in reference to Jalen Rose, who said Tony Allen deserved a Pulitzer Prize for his acting job, and at the same time let the world know he had no idea what a Pulitzer Prize was awarded for. Good hustle, Jalen!

[3] I'm not sure if anyone has actually used that hashtag yet, but it's only a matter of time. Every fan base thinks they're a nation nowadays.

[4] Gag in this sense not meaning joke, but to literally vomit.